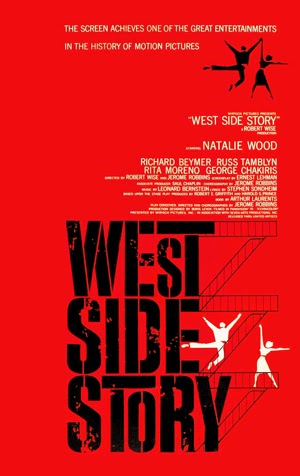 The closest I've ever come to achieving what some call love at first sight happened when I was in my mid-20s. It was at a public gathering. I'm pretty sure it wasn't quite instantaneous; I think I talked to her for a couple of minutes at least, before I knew. Looks was a small part of it, though she was definitely cute. It was more like I just knew how intelligent and funny and lively and sweet she had to be, without even knowing so much as her name - and she was. It turned out we had a mutual friend in common, and that got us talking for quite awhile.

I didn't trust this feeling, though. It was several years after my painful breakup with my girlfriend. Perhaps I was still gun-shy. I don't know. I had dinner plans with friends that night, but I distinctly remember thinking about ditching my friends and asking her out to dinner alone. I wanted to... but like I said, I didn't trust this feeling. I didn't believe in it enough.

As it turned out, she was married. However, we became friends and have stayed in touch ever since, even though we live in separate cities. I've gotten to know her husband, and he's a terrific guy. I'm genuinely happy that they're as close as they are. They belong together. My love for her, however, that feeling I had from the day I laid eyes on her that she could've been the One in a different time and place... that's never waned. 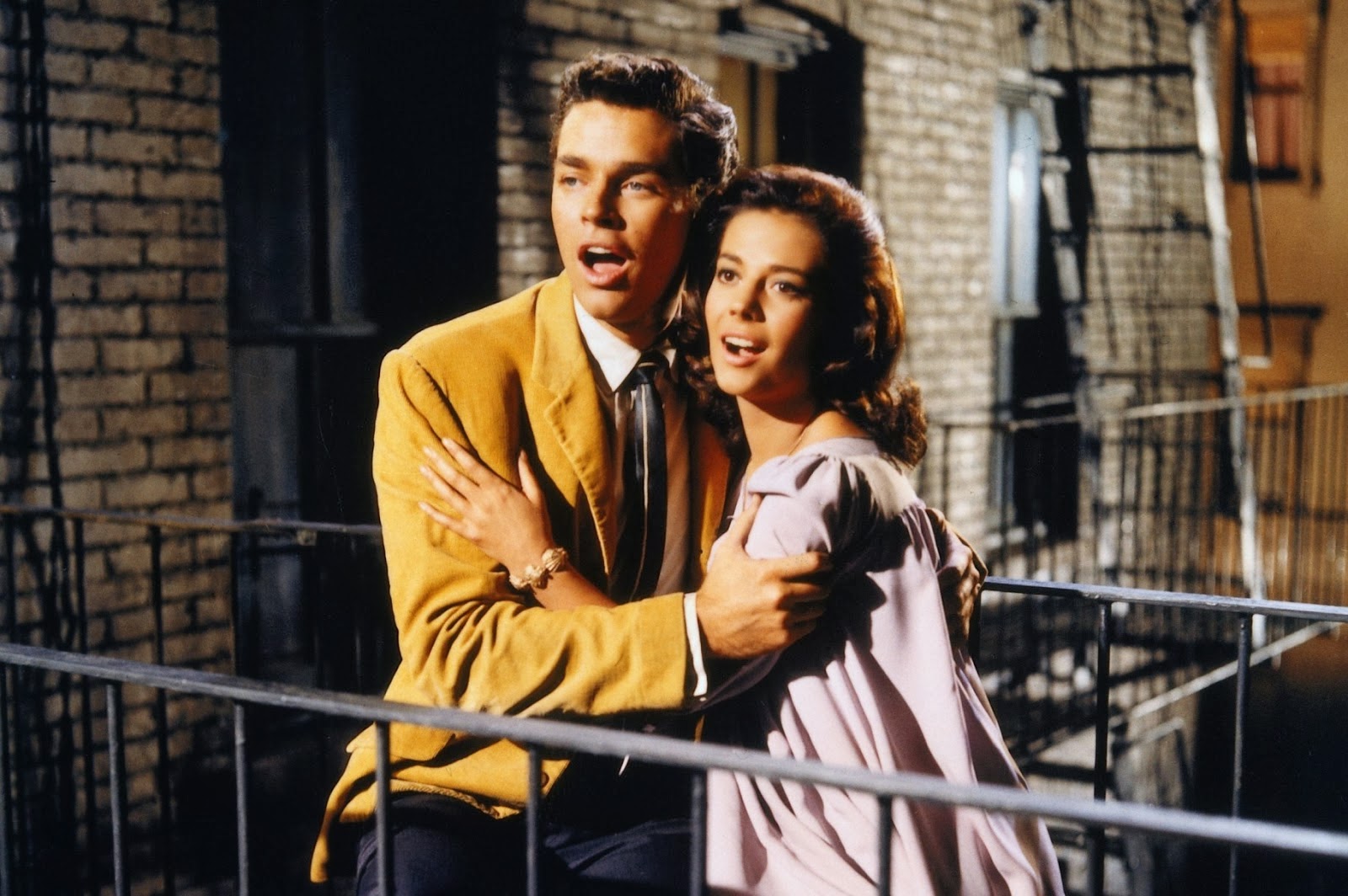 Illogical, yeah, but that's love. I think that the older we get, the less we believe something like "love at first sight" is even possible. Everything's new, there's much to be discovered about your lover and nobody can tell you anything because you've found your "soul mate." But nothing that perfect-seeming can possibly last. The world doesn't work that way. That's the tragedy, but we try to deal with it because we think that what we're getting will be better in the long run than what we're giving up. Whether or not it actually is, well, that's another blog post. And anyway, what do I know? I'm still hopelessly single after all these years.

West Side Story was one of those movies that always used to be on TV growing up. (Silly aside: do you suppose the hockey teams from Winnipeg and San Jose play the music from WSS when they meet?) Even as a kid, I related to it somehow: partly because it was set in a New York I recognized, partly because of all the great songs. I don't recall thinking that the romance between Maria and Tony was mushy or anything like that, that a kid might think. If anything, it probably helped shape my unrealistic expectations for Twoo Wuv that would manifest as I got older. (I had my first crush on a girl in third grade, okay? So don't judge.) 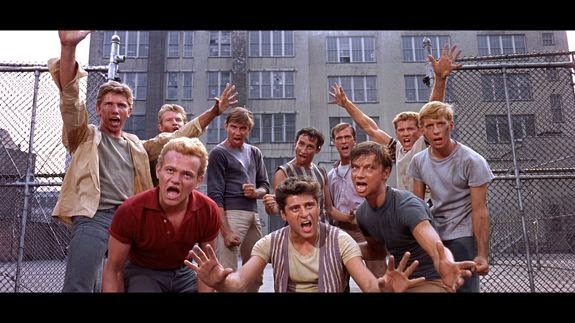 My sister Lynne and I went to the same day camp for a little while - she as a counselor, me as a camper - and one summer there was either a production of WSS or a show featuring music from it. Don't remember either way for sure. Anyway, my boys group was chosen to be the Jets, and I distinctly remember having to rehearse the song "Cool." As a result, that became my favorite song over time. If I'm not mistaken, I think Lynne may have even owned the WSS songbook at one point. It's possible, her being the musician in the family.

I've talked here before about my limited experience with gangs while growing up. The Jets and Sharks, in all honesty, seem like more of a menace to each other than anyone else. I used to think of this movie as being gritty for 1961, but all that dance-fighting kinda shatters that illusion. Plus, they're too well-dressed. I mean, compare them to Marlon Brando's gang in The Wild One, for example. Brando would eat both gangs alive all by himself! Yes, I know, it's only a musical and it's a heightened sense of reality and blah blah blah. It just amuses me sometimes to think of these gangs as "tough" even in comparison to other cinematic gangs from the same era.

I saw WSS Sunday night at a new-old venue in Manhattan. It's now called the United Palace, located waaaaaaaaaaay uptown in Washington Heights, but once upon a time it was one of the grand old Loews movie palaces in the New York metropolitan area, an august group that includes the currently-active Loews Jersey City. When it ceased as an active movie house, it became a church, and it still functions as one, but now this well-preserved venue also hosts other events such as plays, concerts, and of course, movie screenings. Washington Heights native Aurora wrote about it last fall. They kicked off the relaunch of this venue with a screening of Casablanca back in November.

I have some memories of the Heights from back in high school. My old friend Eric used to live there, and sometimes a bunch of us would ride the 1 train uptown to hang out at his place or to wander around the neighborhood. It's mostly Latino, with a vibe not unlike Corona or parts of Jackson Heights here in Queens, only at a higher altitude. The George Washington Bridge takes you into Fort Lee, New Jersey, a place with a bit of movie history of its own. There was a deli I went to in WH once as a teenager that had the most delicious bread I'd ever tasted at the time, but alas, I forgot where it was, as much as I tried looking.

Perhaps the main attraction in WH, however, is the Cloisters, a branch of the Metropolitan Museum of Art devoted to medieval art and a beautiful venue. I remember going there in high school for art-related assignments. The Cloisters sit high atop Fort Tryon Park, a massive park that overlooks the West Side Highway and the Hudson River far below. For awhile, this was a secret getaway spot for my girlfriend and I back in those days because if you wander deep enough and high enough, you'll completely forget you're in New York. 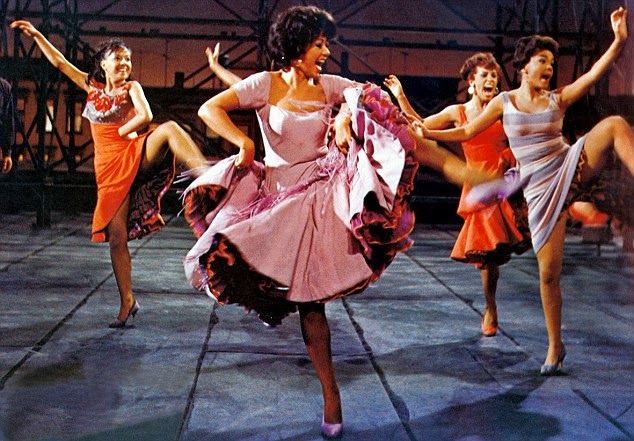 In addition to the movie, the Palace had a special treat: WSS star Rita Moreno appeared in person! Moreno, as you may know, is one of a rare few number of EGOT people - entertainers who have hit the grand slam of entertainment awards: Emmy, Grammy, Oscar, Tony. She was recently feted by the AFI. She got her Oscar for WSS, of course, but I'll probably love her most for her years on The Electric Company. I loved that show SO MUCH as a kid. You don't know.

She appeared prior to the movie in an on-stage Q-and-A with Palace host Lin-Manuel Miranda, a guy who wrote a Broadway play awhile ago set in WH. She was charming and classy and very funny as she talked about WSS and her career in general, and I gotta say, she looks amazing for a woman of 82. If you go to my Twitter page and scroll down the list of tweets, you can see some of the things she talked about, which I live-tweeted.

Later this week, I'll have pictures from the Palace on my WSW Facebook page, but for now, I'll say that it is a dynamite-looking venue, better preserved than the Loews Jersey City because the church has occupied the building for so long. As one who has been to both venues now, I can kinda see how the two buildings could be related. They both have the grand lobby with ornate light fixtures, a wide auditorium with a high ceiling, lavish carpeting and ornate relief work all over the place. The Palace even had an organ, but it was smaller and for display only, unlike the Loews JC. 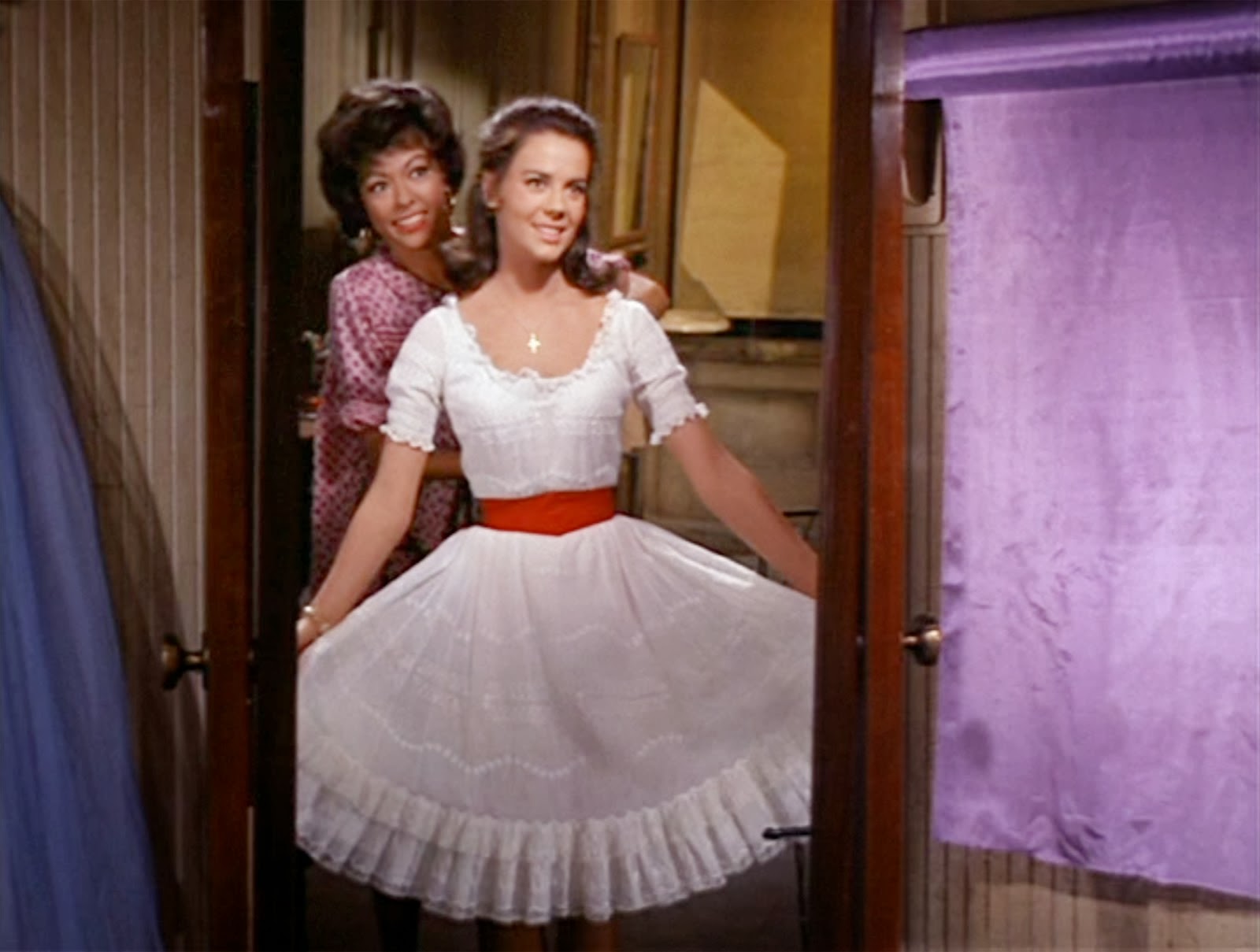 It was a huge crowd, no doubt pumped up to see Rita Moreno as well as the movie. There was pre- and post-show entertainment from a variety of dancers and singers, both on-stage and off - some of the performances were in the lobby itself. The ushers wore these golden sashes, which I thought was a classy touch, and there were these other... presenters, I suppose you could call them, who were decked out in evening wear - tuxes and gowns. There were raffles during intermission and afterwards, and the food included popcorn, candy and cupcakes.

Movies at the Loews JC always feel like an event to me, but the Palace went to extraordinary lengths to really make it one. As a result, the Palace seems more like a populist venue to me while the Loews JC leans slightly more towards the cinephile crowd. I don't feel completely comfortable drawing this divide, but this is based on the upcoming schedule of films at the Palace: Ghostbusters, King Kong, The Warriors, Manhattan. Great films (well, except for Manhattan, in my opinion), but I have a hard time imagining films like Dark Passage, Carnival of Souls or All Quiet on the Western Front - to pick three films I've seen at the Loews JC - playing in Washington Heights.

But that's okay. Variety is good, and there's no reason why the Palace shouldn't continue what they're doing if it means pulling in the crowds they've been getting. I suppose it matters to me because I've been going to the Loews JC longer and I feel closer to it, and if this recent article is any indication, they're still struggling for the kind of community support the Palace already has. 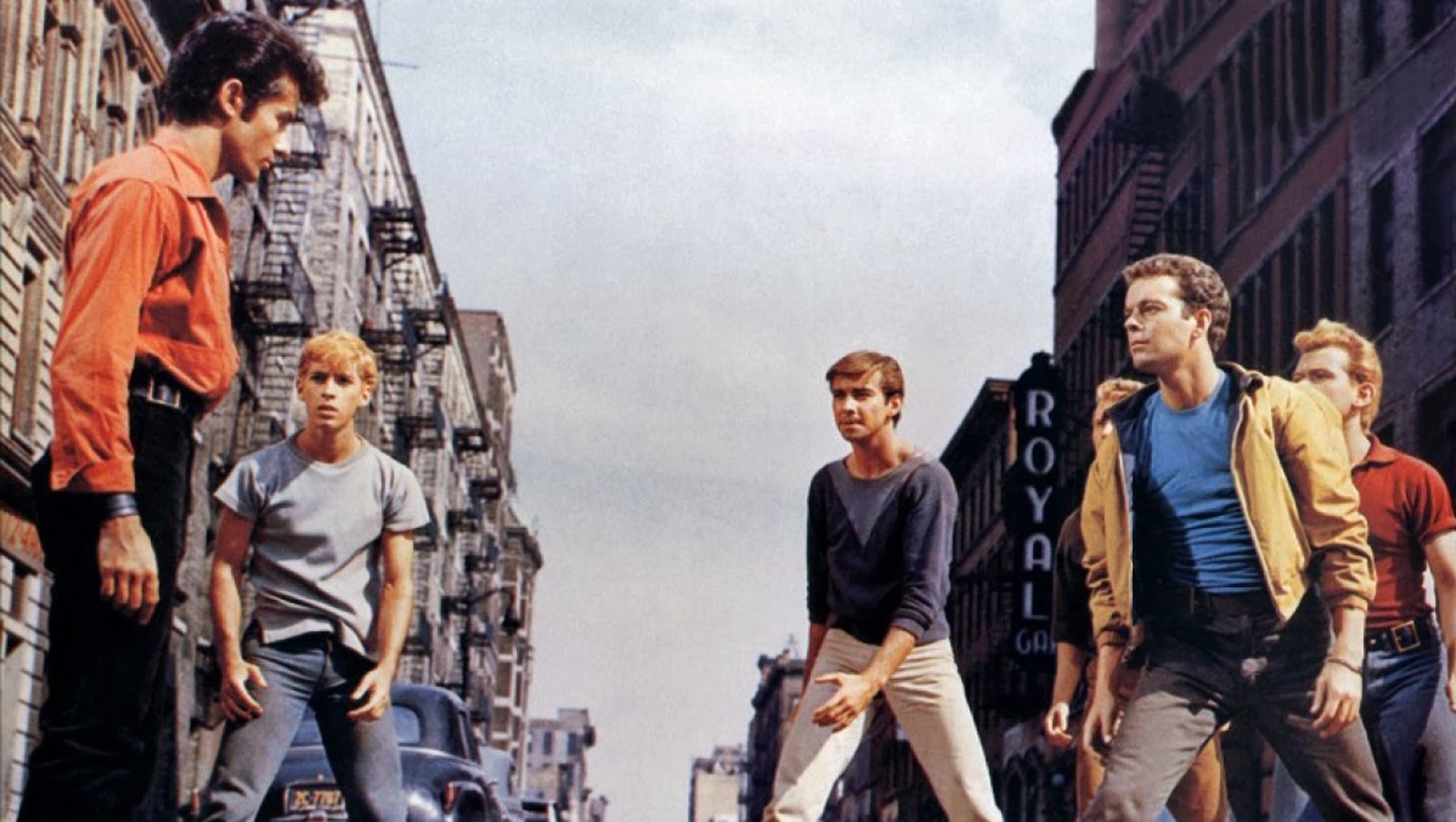 On Saturday, I tweeted Aurora, along with Will and Joe, about this screening to find out if they were going (Aurora was out of town), and this led to a huge four-way discussion about the Palace. It seems that on the night that they showed Casablanca, not only was it on DVD instead of 35mm film (which, admittedly, is harder to come by now), but the aspect ratio was off, so that the image didn't quite look the way it should. (Will just posted a piece on why this sort of thing matters.) The points were made that back in November, the Palace made it clear that movies would still be a priority amidst all the other events, yet they seemed to be off to a rocky start in that area, and that has led to a sense of trepidation amongst my fellow New York area cinephiles.

In a phone conversation I had earlier today with Mike Fitelson, executive director of the United Palace of Cultural Arts (UPCA), the organization that oversees the event programming, he explained to me that they're still in the process of working the kinks out when it comes to film projection, and that their goal is to improve the moviegoing experience at the Palace over time. The Casablanca screening was a result of simply not knowing how to correct the aspect ratio. It probably should be written off as an aberration.

As for showing 35mm film, he did not completely rule it out for the future, but it'll take time to get there. He pointed out that for many people, seeing a film in a place like the Palace is an experience in itself, and that if the UPCA can gradually expand on that experience, then that'll benefit everyone. This conversation confirmed what I already suspected about the Palace, so I say they should be given that time to grow. It looks like they've already come quite far at this point.