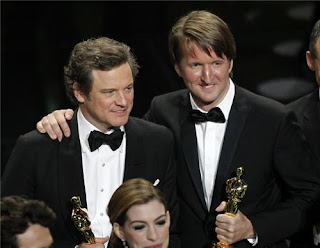 The rest of the winners.

I'll say it one last time for the record: The King's Speech is a wonderful film that deserved to win Best Picture. It's anchored by two outstanding performances, one of which produced an Oscar win, and it's clearly been an inspiration to many people with speech impediments around the world. It may be "Oscar bait," but it's good Oscar bait: it's funny, moving and well-acted.

I still believe, however, that The Social Network was the better movie. That said, I can live with it losing because the difference was not so great as to be a miscarriage of justice. It's like Network was number 1, and Speech was number 1-A, you know? They were close... and we were fortunate to have ten worthy candidates for Best Picture this year.

I'm seeing a lot of resentment towards Speech producer and distributor Harvey Weinstein. Gripe all you want about him - there's no doubt that he can be Machiavellian in his Oscar tactics - but let's not forget that he's the one who successfully fought to get Blue Valentine changed from an NC-17 to an R. Yeah, he's gonna release a PG-13 theatrical cut of Speech, which ain't cool, but at least it comes after the original R-rated version made over $100 million domestically (and he did fight against that movie's R rating, too).

What bothers me most was David Fincher losing Best Director to Tom Hooper. I shouldn't have been surprised; Hooper won the DGA, and it was clear for weeks that Speech was gonna take Picture after it won the PGA (though it didn't clean up as much as I thought it would). Still, I find myself at a loss to imagine how Hooper could have been judged as having done a better job with his film than Fincher did with Network, or Darren Aronofsky with Black Swan, or Christopher Nolan with Inception (which won four Oscars, tying Speech). In my mind, there is no comparison. Maybe I'm not seeing something? 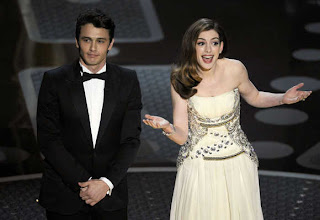 han impressive as hosts. They didn't stink, but they did little to distinguish themselves when compared to past Oscar hosts (seeing Billy Crystal again was a bittersweet moment). And yet, the show itself seemed to move at a relatively brisk pace. For once, sitting through it didn't seem nearly as brutal as in the past in terms of time, but then, the orchestra music-cued so many award winners off the stage that it couldn't be otherwise (Randy Newman being a notable exception). Anyway, I'm glad it's all over.

Enjoy the show? Hate it? Did you win your Oscar pool? Let's talk about it.
Posted by Rich at 9:51 AM