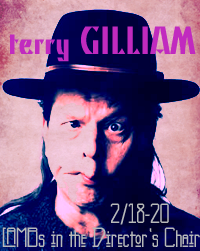 LAMBs in the Director's Chair is an ongoing event in which LAMB bloggers discuss the work and career of a given director. The current subject is Terry Gilliam. The complete list of posts for this event will go up February 18-20 at the LAMB site.

Terry Gilliam is a good director who has run into more than his share of bad luck, it seems, over his career. His clash with Universal over Brazil is common knowledge; the studio wanted one ending, he wanted another, they fought. Gilliam's Don Quixote movie took so long and had so many problems that a documentary about the making of the film was released before the film itself, which may never see the light of day now. Before Zack Snyder, Gilliam tried to make Watchmen twice and failed. And of course, Heath Ledger died during the filming of The Imaginarium of Doctor Parnassus.

It's enough to make one believe in a curse of sorts, except that Gilliam has made some wonderfully imaginative and funny films. In addition to Time Bandits, I've seen Monty Python and the Holy Grail, Brazil, The Adventures of Baron Munchausen, The Fisher King, 12 Monkeys, Fear and Loathing in Las Vegas and The Brothers Grimm. No one does fantasy like him; from art direction and costuming to cinematography and editing, it's pretty easy to spot a Gilliam film.

My pals Bibi and Eric are huge Monty Python fans, and while I may not be as knowledgeable about the British comedy troupe as they are, I've seen enough Python sketches and movies to appreciate Gilliam's contributions, in particular those slightly-creepy-yet-amusing animated bits. (At least, I always thought there was something unsettling about them - but in a good way.) I have Holy Grail on DVD; one of these days I'll write about it so I can talk more about Bibi and Eric, because Python actually helped bring them together. 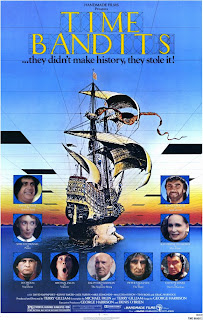 out, in 1981. It was at a neighborhood theater in Queens which, like many of my old neighborhood theaters, is no longer around. Unfortunately, I don't recall the name of it. It was on Northern Boulevard in Jackson Heights. When my father took me there, I happened to run into some school friends and we all watched the movie together.

On a whim, I went back to the site of the old theater yesterday for the first time in I don't know how long. It's now a restaurant. It's still recognizable as a former movie theater; the marquee is still there, covered up by signs for the restaurant. It's smaller than I remembered, but then I was a kid when I used to go there.

Jackson Heights is a mostly Latino neighborhood. Walking east down Northern Boulevard (this little section of it, anyway; Northern is huge), one can find a ton of Spanish restaurants and bodegas. One of my old grade schools, PS 148, is in the area. I only spent first and second grade there, so I don't have too many memories of it other than it was the only school I attended in a school bus. That, and this one girl who used to tease me all the time. (She may have liked me. I dunno.) Further east down Northern is my old junior high school, but I didn't walk that far yesterday.

I don't remember going to the Northern Boulevard theater often. I went to the Jackson and the Colony (I think that was the name) over on 82nd Street much more, even though they were a little further away by bus. Still, the memory of seeing Time Bandits there is vivid in my memory. Perhaps it was because I saw it with friends. I loved the movie, I know that. Still do.