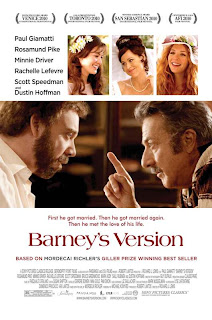 The first time I remember noticing Paul Giamatti was in the 1997 Howard Stern biopic Private Parts. He played Stern's boss when Stern came to New York, and seemed to go out of his way to make life as a disc jockey difficult for Stern. Typical uptight authority figure role, but Giamatti was memorable in it, nearly stealing the show from Stern himself.

Since then, I'd see Giamatti pop up here and there in small roles in other films, like The Truman Show and The Negotiator, and I'd always go, hey, it's that guy from Private Parts again, and smile because I liked that guy, even if I never could remember his name. By the time he appeared in Man on the Moon in 1999, I knew who he was. I wanted to see more of him, but I wasn't sure if he'd become a leading man.

I needn't have been concerned. With the one-two punch of American Splendor and Sideways, Giamatti became, if not a household name, then at least a legitimate Hollywood star. The former is the best film adaptation of a comic book, bar none, and the latter was a Best Picture nominee, but both times, Giamatti missed out on a Best Actor Oscar nomination despite near-unanimous critical praise in both films. The Sideways snub is particularly galling; in addition to Picture, that film was also up for Director, Supporting Actress and Adapted Screenplay, and was the only Best Picture nominee that year whose leading man was not nominated. (He'd eventually get a Supporting Actor nomination in Cinderella Man, though.)

What I like about Giamatti is his "ordinary guy" 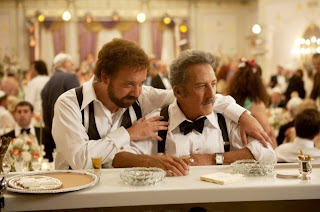 look and style. He looks like somebody you'd know from work, or somebody with whom you'd go out for drinks with the fellas, things like that. He's visually distinctive, yet he has the ability to immerse himself in his roles so that you don't see him, you see his character. He usually plays put-upon, heavily flawed, sad-sack types, yet he's had beautiful women like Virginia Madsen, Laura Linney, Minnie Driver and Rosamund Pike as his cinematic wives and girlfriends. He can be funny or he can be tragic, but he's always believable.

I was happily reminded of this when I finally saw Barney's Version yesterday, the film for which he won the Golden Globe. I have Andrea to thank for this one; when we went to see The Illusionist a couple of weeks ago, this movie came up and she said how much she loved it. I had already considered seeing it at that point, but her rave convinced me that I had to, and I'm glad I did. Barney is another heavily flawed character, unlikable in places, yet Giamatti makes us able to feel for him. And how appropriate is it that Giamatti shares this film with the great Dustin Hoffman, a character actor from another generation, one who proved you didn't need classic movie star looks to be a movie star. Seeing the two of them on the same screen was a rare treat.

Giamatti has a lot of stuff coming in the next couple of years. I hope they're all as good as this movie was.
Posted by Rich at 10:05 AM