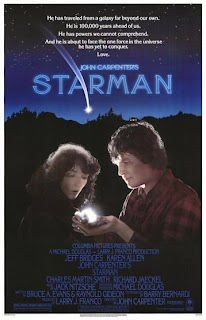 They say opposites attract. "They" also say that birds of a feather flock together. So which is it? When we look for love, we expect to find someone not too different from us, yet often times we end up with someone who's very different indeed: one neurotic, the other self-confident; or one neat, the other a slob; something like that.

I've never considered myself a social butterfly (though I can be when I want to), but I have often found myself attracted to women who are Chatty Kathys. When I was younger, this tended to be a bit of an issue sometimes, because feelings of jealousy and possession would get in the way. These days I've made a greater effort to gain control over those feelings, but this serves to illustrate the kinds of problems that arise when two people who seem incompatible on the surface come together.

One girl I carried a torch for was as different f

rom me as you could imagine. Her tastes and attitudes on music, art, and life in general were far left of center and deeply underground, and this was at a time when my own worldview was still growing and expanding at a rapid clip. Being around her was a true learning experience, and I never doubted she enjoyed my company, but I suspect a part of me knew all along that we were simply too different to ever mesh romantically. I was never the type she'd go to bed with, and I knew that, but of course I was too stubborn to admit that to myself. No hard feelings, but sometimes when it comes to people from different worlds, there's just no love connection...

... except when there is. I had seen John Carpenter's Starman before, but I think I remembered it as being cooler than it actually is. It came out the year after ET, and it's basically the exact same story except with adults. The romantic element, significant as it is, wasn't quite enough for me to ignore the ET parallels, though it was nice to see the young Jeff Bridges again.

When it comes to alien-human relations, t 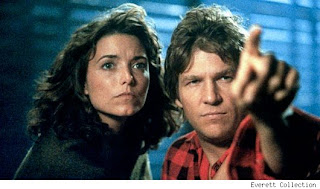 he way Hollywood depicts them in the movies seems to come and go in cycles. In the 50s, aliens were aloof and mysterious and always bent on conquest. Then came Close Encounters of the Third Kind, and all of a sudden aliens are benevolent and gentle, and that lasted for awhile. Then in the 90s, Independence Day swung the pendulum back towards mass destruction, and now aliens are badass! We didn't see too many more alien invasions for awhile, but now they've come back with a vengeance thanks to District 9, Skyline and the upcoming Battle: Los Angeles. (Keep in mind I'm not including humans and aliens in outer space here; just humans and aliens on Earth.)

If I were an alien running around on Earth and I fell in love with a human girl, I think I'd be more concerned about things like whether or not we could be sexually compatible. They never talk about THAT, although Bridges' alien didn't seem to have any problems there, amirite? Maybe I'd figure out a way to take her back home with me if she wanted to go. Bridges' character can do all these amazing things and has all this wild technology, yet he couldn't figure out a way to bring Karen Allen along with her? Come on. (Though I suppose that's the great tragedy... sigh...)

Previously in A Love Bizarre Week:
Bride of Frankenstein
Breaking the Waves
Posted by Rich at 8:32 AM