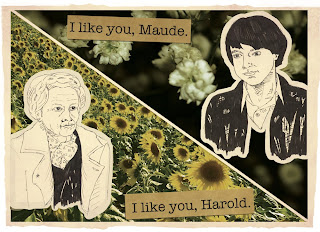 Late last summer, a study based out of Australia, conducted through singles websites around the world, concluded that "cougars" don't actually exist. In fact, the study revealed the opposite - that women wanted men about their own age or older. This theory has been challenged, naturally. I cannot speak to the validity of the study or lack of same, but I can say this: I've found that as I've aged, older women look more attractive to me, though not necessarily for sexual reasons.

Actually, I'm not entirely sure what my reasons are. Part of it, I suppose, has to do with me being adverse to the whole dating scene in general; clubs, bars, that sort of thing. That environment has always been off-putting to me because it comes with so many expectations and preconceptions that are difficult, to say the least, at living up to. Parties are easier, especially parties hosted by friends I know. There's usually a better variety of people there, and in the past couple of years I've had wonderful interactions at parties with women who have become acquaintances and friends.

As a result, I've tended to meet more older 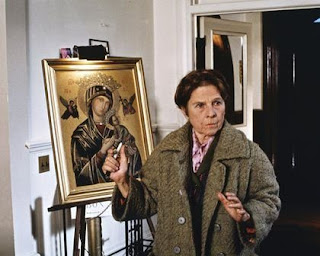 women than younger ones, and many of them are great to talk to and be with, and I find that very attractive, even sexy, age difference be damned. Of course, a lot of them are married. I met one older woman who was going through a divorce, one which actually put her off of relationships in general... which is too bad, because I adored her and loved talking to her about all kinds of stuff.

I suppose the emergence of the "cougar" in popular culture has started to reverse the double standard of older men dating younger women to be acceptable, but not older women dating younger men. If anything, it seems to be a by-product of the sexual revolution and the women's rights movement; being over 40 no longer has to be a death sentence for women. Sex and the City has seen to that.

Let's be honest, though: when it comes to Hollywood, older women still get the short end of the stick. For every Meryl Streep and Helen Mirren, there are at least a dozen much younger starlets who continue to get more work and exposure. The recent Melissa Leo Oscar fiasco helped to illuminate this fact. Romance movies involving older women simply get very little traction for anyone not named Jennifer Aniston.

Which brings us to Harold and Maude, the 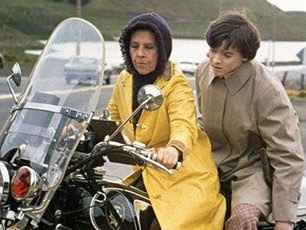 movie that takes the cougar idea to its most ludicrous and extreme limit. For all of its black humor and absurdity, however, it is at heart a touching and sweet love story, in its own way. It's the heir to The Graduate, another famous cougar movie, in more ways than one: note the way the film depicts Harold's relationships with the adult authority figures in his life. They talk at him, not with him. The generation gap exists in more than one context with this movie.

Harold and Maude is the kind of movie they mean when they say, "They just don't make them like they used to," although we'd better watch out... sooner or later, somebody's bound to want to remake this with Betty White.

(The illustration at the top is by Alex from Film Forager, a copy of which can be yours if you visit her Etsy page!)

Previously in A Love Bizarre Week:
Bride of Frankenstein
Breaking the Waves
Starman
Posted by Rich at 9:16 AM