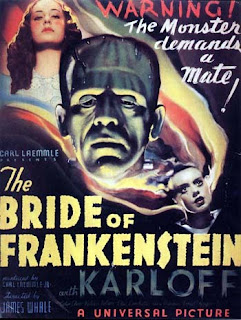 I've never been on a blind date, but I can imagine how terrifying it must be. I would imagine that the level of anxiety is directly proportional to how much you trust your friend or relative to set you up with a person they think you'll like. One doesn't like to think that one can't find one's own true love. If somebody were to do a study on the number of blind dates that led to long-term relationships, I'd imagine the percentage would be very low.

Bride of Frankenstein is kind of like the original blind date movie. Like any good sequel, the further evolution of the characters means the stakes are raised, and the Frankenstein monster's continued development as a sentient being is key, because now he's able to express his desires. Sensing his own uniqueness, he wants the companionship of another like him, but the great tragedy is that even among other monsters, he is more alone than he realizes.

I had forgotten how much fun this movie is! I suspect it was intended to be taken as seriously as the original Frankenstein, but there's a madcap approach to this whole story that feels inherent. I admit, Mel Brooks ruined any possibility of ever taking either this or Frankenstein seriously anymore, and there were lots of scenes where I could only see Madeline Kahn and Gene Hackman and especially Cloris Leachman instead of the original actors.

At the same time, though, James Whale films this 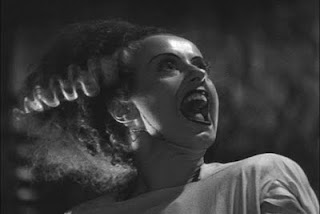 with a frenetic energy that's palpable, and it does feel like he's aware that it's only a movie and that it's all in good fun. The opening scene with Mary Shelley is a good example. That this scene was even thought of at all was clever, a way of letting the audience know that hey, you don't have to take this quite so seriously. Imagine, by contrast, if the opening scene of The Twilight Saga: New Moon began with Anne Hathaway as Stephanie Meyer talking to her friends about the original Twilight book, completely taking the Twi-hards out of the story they've invested in and believed in and loved and landing them back in the "real" world, if only for one scene. The rioting would last for days.

The images in Bride, as well as the original Frankenstein, have become so iconic, so embedded in our culture, that to see them in their original context is a little surreal, and at the same time, thrilling - to say nothing of the influence these films have had on other works. Watching Boris Karloff as the monster, I thought of the Hulk, as he was originally conceived: a creature born of science gone awry, quick to anger yet peaceful at heart, never completely divorced from its humanity, wanting to live like other people, to appreciate beauty, to have a friend... 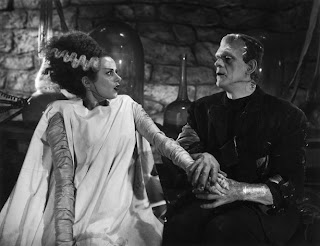 d someone to complement ourselves, someone compatible. To charge someone else to find that special person takes a tremendous leap of faith. We may say that we're not thinking long-term when we get set up with a total stranger, that we'd be lucky to just get a second date, but isn't it in the back of our minds every time we meet a person who we think could be The One? I find it's truer the older you get, when you become more aware of your impending mortality. You don't want to believe that something about yourself is repulsive to a potential lover, and you certainly don't want to go through an endless parade of one-night stands anymore. The Frankenstein monster realized this to a certain degree, I think, which is why he opted for the only solution that made sense to him in the end.

Anybody got any blind date stories?
Posted by Rich at 8:49 AM