The Pop Stars Moonlighting Blogathon is an event devoted to singers who act, hosted by RealWeegieMidget Reviews. For a complete list of participating bloggers, visit the link at the host site.

He was a musician in the fields of not only country music, but rock, folk, and gospel, a pioneer whose influence continues to be felt today. He had a roguish reputation, fueled by his addictions to alcohol and drugs. He was a deeply spiritual man who wrote songs about the plight of Native Americans and other disenfranchised people. They called him the Man in Black—but his name was Johnny Cash. 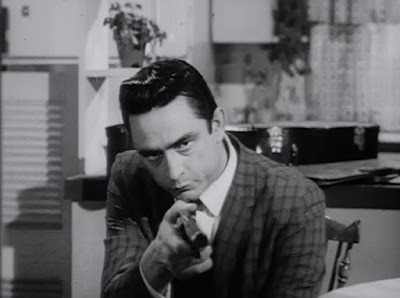 My father didn’t have any of Cash’s records, yet I imagine he, who grew up in the rural south and listened to almost as much country music as R&B, must have had an appreciation of the man’s music. I learned about Cash on my own. I must have taken an interest in him during the 90s, when he began covering songs by modern bands like Depeche Mode and Nine Inch Nails and Soundgarden.

One day I bought a double-CD Greatest Hits collection from the Virgin Megastore and upon first listening to it, I was surprised at how diverse his music was, especially at how much he had in common with guys like Elvis Presley and Bob Dylan.

His notoriety as a rebel was evident from the T-shirts I’d see for sale on St. Mark’s Place and worn from time to time. They’re kinda like Che Guevara or James Dean shirts: the image, on its own, became so commercialized and mainstream that after awhile the meaning behind it became diluted. One forgets the impact it originally had—but Cash was no joke. He was the genuine article.

Of course I saw the movie Walk the Line, with Joaquin Phoenix, and by that time I was familiar enough with who Cash was that I could recognize his voice, his mannerisms, in Phoenix’ portrayal. Reese Witherspoon was equally good as June Carter. Cash himself was no stranger to Hollywood: his variety TV show only lasted two seasons, but it attracted a wide variety of musical and other stars, past and present. 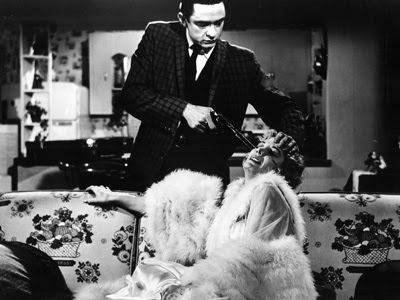 His career as an actor was nothing to sneeze at, either. Cash appeared in a number of TV shows (Columbo, The Partridge Family, Little House on the Prairie, Dr. Quinn, Medicine Woman) as well as TV and theatrical movies. He acted with his musical peers Carter, Kris Kristofferson and Willie Nelson. He played historical figures Frank James, Davey Crockett and Civil War abolitionist John Brown.

Today I’m here to discuss his first feature-length film, a crime flick called 5 Minutes to Live, from 1961. I wish I had kinder things to say about it. Directed by Bill Karn, it stars Cash as a small-time hood hiding out from the law in suburbia. He pulls a job with Vic Tayback (Mel from Alice) in which he terrorizes the wife (screenwriter Cay Forrester) of a banker so her husband will be coerced into robbing his own bank for Tayback.

The premise itself isn’t bad. The idea of robbing a bank without firing a shot by threatening an innocent life is reminiscent of the opening scene of Out of Sight. Too much time, however, is spent on the banker and his family, to the point where it feels like a 30s Cagney movie spliced with The Donna Reed Show. Forrester’s screenplay wants to emphasize the contrast between the urban, big-city Cash and the mundane suburban atmosphere, but the overall effect feels uneven and jarring. The mediocre pacing doesn’t help. 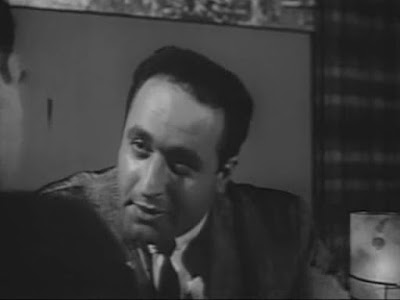 In 1961, Cash released his tenth studio album, Now Here’s Johnny Cash, which has the singles “Cry! Cry! Cry!” and “Hey Porter.” He had already left Sun Records for Columbia, plus he was touring with Carter and the Carter Family. His acting career had begun two years earlier with appearances on several TV westerns, including Wagon Train.

Cash’s character in 5 Minutes is actually named Johnny and plays guitar; he even sings a little bit—but there’s a laconic feel to Cash’s acting. He doesn’t come alive until he’s inside Forrester’s home and threatens her, and even those scenes alternate with him whipping out his guitar while he still holds Forrester hostage and playing, for no reason other than he’s Johnny Cash and we expect him to perform some music.

He’s not Malcolm McDowell in A Clockwork Orange or Brando in The Wild One; he’s not even Elvis in Jailhouse Rock. As much as Cash tries to be menacing, he can’t quite make it convincing, though in his defense, the screenplay is as much to blame. He got much more work as the years went by, though. I suppose he improved as an actor. Still, I’ll take his records instead.