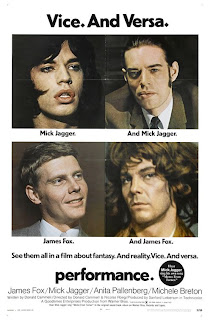 I almost wasn't going to go see this. I'd heard about this film before, but from the reviews I'd read on IMDB - which were glowing, but also made clear that this was unconventional - I wasn't completely sold on it. I almost went to see Inception a second time (which I'll probably do anyway). Plus, I hadn't gotten a lot of sleep the previous night and wasn't looking forward to coming home late. I decided to give it a chance, however.

The screening was presented by a local film-lovers club called the Kings County Cinema Society. The screening of Top Hat I went to last month was theirs. At first I thought the website was just a resource for free screenings - which of course, it is - but it wasn't until after the fact that I realized that they're the ones that show these films they list.

The screening was also being presented by a local filmmaker named Jason Tallon. The apartment we were watching Performance at belonged to some friends of his and the movie was projected on one wall, through a laptop computer with separate speakers, as was the case at the Top Hat showing. In addition to the main event, Tallon showed a couple of his shorts. While visually stunning, they didn't have much in the way of narrative, but I suspect that was probably intentional.

This felt more like a private party that I had crashed rather than a film screening. I talked to a few people, but I couldn't help feeling more than a little anxious and out of place - which wasn't anyone's fault really, but that's how it is when you're surrounded by total strangers. The hosts made cookies and other snacks and offered wine, and the audience, many of which looked like friends of Tallon, congregated either outside in the backyard or in the kitchen. The backyard was terrific - a concrete patio with a garden off to one side and a tree swaying in the chilly breeze. Christmas lights ran like runway lights along one side of the patio, with 70s-ish canvas-and-wire chairs mixed with wooden ones. I'm somewhat large, and I had to settle into the canvas chair slowly, for fear of busting right through it. It held, but it made me fearful of getting up again!

While the editing, cinematography and especially sound was remarkable and must have seemed cutting-edge in 1970, I honestly couldn't make heads or tails of Performance. It didn't help that it was getting colder as the night progressed. At one point I slipped my arms out of my short sleeves in an attempt to keep warm. The wind was steady and at one point it blew hard enough to sway the branches on the tree considerably. I was yawning off and on, though I never fell asleep. I switched from the canvas-and-wire chair to a wooden one and I kept shifting back and forth in it, desperately trying to maintain a level of comfort. Some people were laid out on the concrete in the front. One chick sitting next to me was fiddling with her Blackberry. I suppose I couldn't blame her if she was bored.

This must sound like I had a terrible time, but I want to make clear that I think the KCCS does a good job at organizing these screenings. I'm certainly grateful to have the opportunity to see free movies, especially now that summer's just about over.
Posted by Rich at 10:38 AM