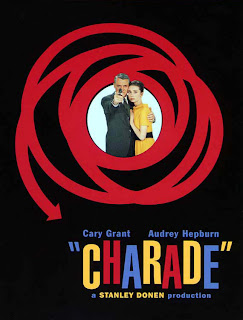 I was out all day Saturday, with some of my plans for the day coming through and some not. I spent the morning and early afternoon at a huge art festival in Brooklyn. From there, I had planned on going to a smaller art exhibit also in Brooklyn, but the trains made it difficult. It was partly my fault; I probably could've left DUMBO a half-hour earlier (that's Down Under the Manhattan Bridge Overpass to you non-New Yorkers), but I was enjoying the day too much. Still, I had to take a completely roundabout trip to Greenpoint because the trains that would've gotten me there quicker weren't running normally. I knew when I got off the train that I wouldn't have had any time for this show, so I reluctantly chose to blow it off and head to Jersey City for the highlight of the day - a return to the Landmark Loews Jersey Theater.

I discovered the place completely by chance. I was in Jersey City a few years ago on other business, and when I got off the train, I couldn't help but see it, since it was across the street. You could say it was love at first sight. An old-style movie palace, still showing classic movies? How could it be anything else? The first time I went inside for a film was at a screening of All About Eve which must have been in either 2006 or 2007. They brought in Celeste Holm, the last surviving cast member at the time, as a special guest.

The Loews is the way you'd imagine a movie 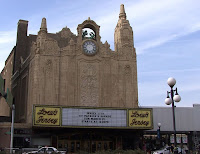 palace to look: a box office and marquee on the outside, followed by a carpeted lobby with a chandelier suspended from the ceiling, columns all around, and a grand staircase leading to the restrooms and the balcony (which is currently closed, pending repairs). The auditorium has a center aisle and two side aisles leading to the main stage, where off to the side there's a fancy old-style organ, and yes, a professional organist plays it prior to showtime. My descriptions don't do it justice; you need to go to the website and see the pictures for yourself, as well as the restoration process that the theater has undergone. If I lived closer, I'd probably volunteer to help keep it clean.

On Saturday the Loews had a double feature, Charade as the late show and Orson Welles' The Stranger as the early one. I would've gone to see both if not for the exhibit in Greenpoint, which I ended up missing anyway. To add further insult to injury, I forgot where to get off on the New Jersey PATH train! I got off one stop early, got out, didn't recognize the street or anything in it, went back inside the station and took the next train. It had been years since I'd last been to the theater, and it's not like I visit Jersey that much.

I'd only seen Charade once before, long ago. I had expected it to be a thriller in a similar vein to Notorious or Spellbound, so I was pleasantly surprised to see it's actually lighter than that. (Cary Grant taking a shower in his clothes? Definitely lighter.) Afterwards, there was a guy who came on stage to talk further about the film, but I left, thinking that the PATH was gonna stop running soon, when in fact it runs 24-7. I'm not always this unprepared when it comes to traveling, honest.

So that was my Saturday - fifteen and a half hours worth. Add to that hanging out at the San Gennaro Festival with friends Friday night and more of the art festival on Sunday and it was one of the busiest weekends I've had all year. Weather-wise, it felt like summer's last gasp, and sure enough, it's pouring rain today as I write this.
Posted by Rich at 8:46 AM