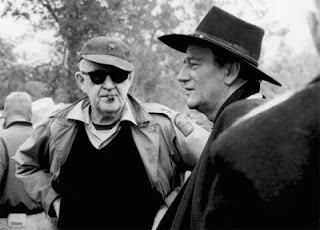 ...Suddenly, here before me, were 35mm prints of an awful lot of John Wayne movies: mostly brand-new-looking cases, boldly marked “RED RIVER,” “THE QUIET MAN,” “SANDS OF IWO JIMA,” “RIO BRAVO,” “SHE WORE A YELLOW RIBBON,” etc. For a movie buff, it was a heady moment. I said something like, “Jesus Christ, Duke, do you have 35mm prints of all your pictures!?” He said, “No, but just about. It’s been part of my regular deal for a long time—the studio’s gotta give me a print off the original negative.” A light went on in my head. I looked around and saw quite near me a canister marked “STAGECOACH.” Knowing the original negative of that classic film—-the one which turned Wayne into a major star—-had been lost or destroyed, I got excited: “Is that print of Stagecoach from the original negative?”

Veteran filmmaker and film historian Peter Bogdanovich recently started a blog at IndieWire, and in this installment he talks about one of my all-time favorite Westerns - and certainly one of my favorite movies - Stagecoach, and how an interview with its star, John Wayne, led to the film being kept in print. I first saw Stagecoach on video during my video store job in the late 90s, and was immediately taken by it. My father had always loved Westerns, though as a kid I thought they were cheesy, the way all kids scorn the stuff their parents like. This was one of the first films that made me really appreciate the genre.
Posted by Rich at 8:53 PM