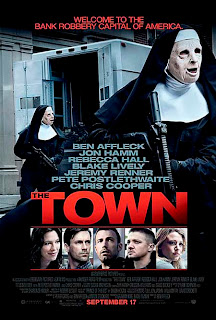 One thing about Hollywood movies that can be a bit of a drawback is that it's sometimes hard to forget you're seeing a Movie Star when all you want to see is the character in the story. I had been reading about The Town for weeks leading up to its release, and the emphasis was naturally on director/co-writer/star Ben Affleck. I've always liked Affleck, going back to his appearances in Kevin Smith's films, like Chasing Amy and Mallrats, and I think it's awesome that he's building a new career for himself as a director, with both this and his previous film, Gone Baby Gone. When I actually saw his new film, though, it took a long time for me to see his character and not himself.

To be honest, that happens a lot with most Hollywood movies, although it's not always a negative. There can be a comfort in seeing a favorite actor doing his or her thing in a movie you enjoy. Arnold Schwarzenegger didn't need to submerge deep into a character, Method-style, in order for you to better appreciate his movies; he could more or less be "himself" and that would be enough. Other times, though, the role is as important or more so, and you wanna forget who the actor is so you can more readily give in to the fantasy.

Occasionally an actor's reputation precedes them even if you've never seen them before. This will come as a great shock, I'm sure, but I hardly watch television at all, and therefore have yet to see the hit series Mad Men. So I was seeing Jon Hamm for the first time in The Town - and yet, in the beginning, he only registered to me as the guy from Mad Men, even though I've never watched the show! (Which is not meant to be a knock against the show; like I said, I just don't watch a lot of TV.)

Fortunately, The Town was so good that I was eventually able to get caught up in the story. But that's not always the case with some movies and some movie stars.

I saw this with Reid. The theater is a tiny little neighborhood one, but they insist on checking your bags upon arrival. If they do have a history of violent activity there, I've never been witness to it, but then, I've only been here a handful of times. When the matinee showing began, the theater had maybe a half-dozen people; within the first ten minutes, maybe a dozen more showed up. Why aren't people able to arrive on time? Plus, Reid said he saw one person leave the theater five or six times. If those were all bathroom breaks, then that guy's got some serious problems.
Posted by Rich at 8:43 AM