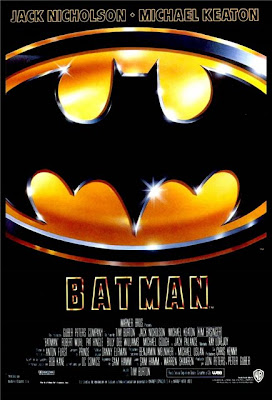 Times Square started going through its dramatic overhaul during my teen years, approximately, but I'm old enough to remember how it used to be. I was way too young to appreciate it - if that can be the proper word - during the Taxi Driver-era 70s, but one thing I remember well about the neighborhood was the greater amount of movie theaters - and not just the X-rated ones.

You can see them in lots of old black and white Hollywood movies, of course - the ones that lined Seventh Avenue and Broadway. When I was in my pre-teens, the porno houses on West 42nd were still around, but I recall with greater clarity the ones on Seventh, about where the Toys-R-Us is now. Since I went to high school in Manhattan, my friends and I often saw movies here, among other places around the city, and it was here that we saw Tim Burton's original Batman film on opening day in 1989. Unfortunately, I cannot recall the name of the theater itself. I believe it had only two screens but was quite big. We went to see Batman after school, of course, and I vividly recall the line that was wrapped around the corner on which we gleefully waited.

Of course, Bat-mania was everywhere that year, and we knew this movie was not to be missed, even though I hadn't read comics in years to that point - and I had never even collected the actual Batman comic. It's strange; I loved the first two Superman movies and the first two Batman movies passionately as a kid even though I never read the comics. Marvel, the home of Spider-Man and the X-Men, made the only comics for me growing up, and everything else might as well have not existed. That's how it was back then - you read either Marvel or DC, and once you made your choice you were loyal to a fault. (It still is this way to a lesser extent, but that's another post.)

Getting back to Ti

mes Square, though - I can't deny that the renaissance it has undergone has been striking, to say the least. I speak not so much of the mega-retail businesses and the family-friendly tourist attractions and Broadway shows as I do of the pedestrian plazas and the reorganization of traffic lanes. While I certainly have done my share of shopping in the new Times Square, I can't recall ever thinking of the area as a place to simply hang out and relax until now. I'm still unused to the feeling of sitting in the middle of what once was a street full of cars. Similar changes are being made city-wide now, and it's an idea whose time has come. Cars have dominated the cityscape for far too long, and when some drivers get out of control, the consequences can be, and often are, fatal. It's good to see that places like Times Square have become safer to walk around in.