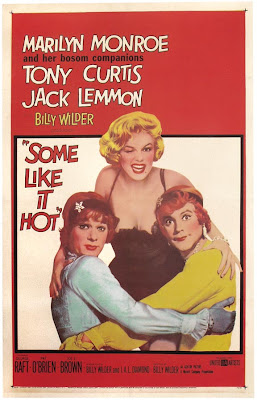 The first time I saw a Billy Wilder film was when I was in college. I took a Film History class on a whim, and it was there that I gained a true appreciation for classic cinema. The teacher screened Sunset Boulevard. I'd never seen anything quite like that before; an old movie with such a bleak, cynical sense of humor, and complicated characters that aren't entirely likable, yet still strangely sympathetic. And such dialogue!

After college, I worked in a video store with an extensive catalog of titles dating back to the silent era, and I was able to watch more Wilder films on my own, including his earlier work as a writer only, before he became a writer-director. His ability to mix comedy with drama in the same story, even to the point of mixing genres, is remarkable. Some Like It Hot is part screwball comedy, musical, and gangster action, and yet it somehow fits together, even if the seams show in places. Wilder's dramas plumb the depths of human frailty in unsettling ways, while his comedies draw much of their humor from the characters themselves, to the point where even those on the periphery are memorable. And of course, the array of acting talent he assembled can't be beat: William Holden, Barbara Stanwyck, Walter Matthau, Shirley MacLaine, Kirk Douglas, Fred MacMurray, Jimmy Cagney, and so many more. I don't love everything he did, but his overall body of work makes him my all-time favorite director.

Last night was only the second time I'd been to the expanded Brooklyn Bridge Park. It's nice. The lawn on which the film was shown was dog-free this time, but that's by design, and because it was a lawn and not just a grassy knoll strewn with dirt and rocks, I could lie back on my side and relax. There were lampposts as well, so after the movie ended we weren't all stumbling through the dark, which I find a bit disorienting after watching a film outdoors. I saw one group of people from far off who were simply chatting with each other throughout the film. One woman actually had her back to the screen. Why come to an outdoor movie if you're not even gonna watch it?
Posted by Rich at 12:36 AM