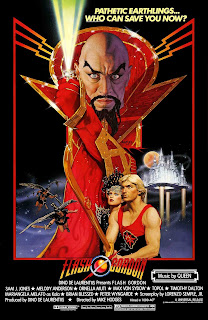 I think I saw Flash Gordon when it came out, but I would’ve been  only eight, so I’m not sure. It probably was on my radar then; I was aware of comparable movies from around that time like the original Clash of the Titans and Superman, so if I saw it advertised on TV, I would’ve begged my parents to take me to see it.

It seemed every sci-fi/fantasy film in the 80s wanted to be the next Star Wars, and Flash was one of many pretenders to the throne. It had elements of both: outer space and alien planets mixed with sword fights and kingdoms—and no one cared that much about scientific or historical accuracy or making everything look “realistic” because they were too busy having fun with the subject matter.

Everything in Flash screams over-the-top—the costumes, the props, the sets, and especially the performances—but watching it again for the first time in decades, at MOMI, I realized as unlikely as it seems, it’s still watchable. More than watchable, in fact, even in an age where we demand a certain level of “realism” in our comic book movies, to the point where they’re almost ashamed of their four-color origins. 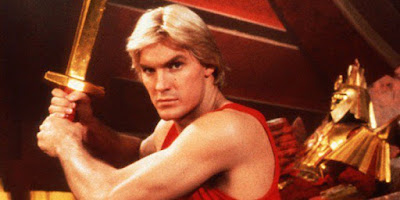 I’m not that familiar with the original Alex Raymond comic strip, but I can tell you it began in 1934 for King Features Syndicate, as competition for Buck Rogers. The radio serials followed a year later and the film serials the year after that. Comic books, merchandise, international translations, television—Flash has been a surprisingly durable character.

Fantasy/adventure strips from the 30s and 40s, the era in which Flash thrived—titles like Little Nemo in Slumberland, Terry and the Pirates, Prince Valiant, The Spirit, and of course, Buck Rogers—were comparable to today’s superhero comic books in terms of storytelling: arcs that kept the reader riveted, sophisticated artwork rendered in exquisite detail, and the Sunday installments—forget about it! 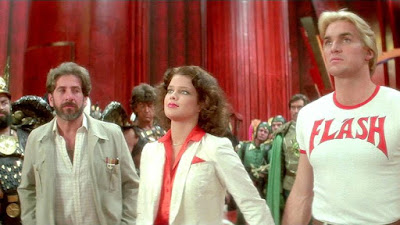 The film pays homage to Flash’s roots in its opening credits, a montage of old Flash strips set to the awesome theme song by Queen. Modern filmmakers take note: this is how you make an opening credits sequence, since they must’ve forgotten how to make them all of a sudden. It’s visually stimulating, it provides a sense of the movie to come as well as acknowledging its source material, the music is thrilling and gets you pumped up, and it’s fun. I cannot understand why so many modern movies, in multiple genres, have become unwilling to employ them anymore, though some still do. Jojo Rabbit had good opening credits, to pick a recent example. (Speaking of which, Taika Waititi has been rumored to be part of a Flash remake.)

I confess, when I saw Bohemian Rhapsody, I was hoping there would be a scene where we’d see Queen record the Flash theme song. It’s as bombastic and hyperbolic as the movie; way better than it deserves to be, but that’s what Freddie Mercury was all about, wasn’t he?

Flash was produced by Dino de Laurentiis, a prolific filmmaker from Italy whose output combined European movies like Nights of Cabiria, La Strada and Barbarella with commercial flicks like Serpico, Death Wish, King Kong ‘76, Conan the Barbarian and Dune. He had a reputation for being full of energy, hyping his pictures to the rafters, whether they were blockbusters or turkeys. This Variety obit from 2010 goes further into his long career.


DDL had a vision for Flash that led him to go through one big-name director after another. Fellini was his first choice, but he came and went. George Lucas wanted to make his own Flash movie, but DDL wouldn’t give up the rights—so he made Star Wars instead. Nicolas Roeg wrote a treatment that was more cerebral than the finished product. It was rejected and he quit too. Finally DDL settled on Get Carter director Mike Hodges. You can read about the rest of the production process here, including the struggles screenwriter Lorenzo Semple Jr. had with DDL’s translator and how Queen got involved with the soundtrack.

The only thing I regret about seeing Flash when I did was not seeing it with a more... enthusiastic audience. The crowd at MOMI wasn’t bad, but I had expected it to be a bit more lively for a movie like this. If it had played at, say, the Alamo Drafthouse, later in the evening—eight or nine PM, perhaps (MOMI screened it at six), I suspect there would be more of a party atmosphere, since Flash is such a campy film and one doesn’t need to take it as seriously as something like Solaris, for example. 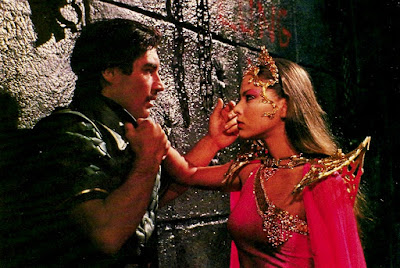 MOMI, as excellent a venue as it is, doesn’t cater to the midnight-movie crowd, which is hardly surprising; it is a museum. I kinda wish it did, though, every once in awhile. Audiences at the Queens World Film Festival can get silly sometimes, depending on how many of a director’s pals are in the audience, but MOMI is not the Alamo. Most of the time, that’s fine by me... but this time was different. Oh well.