The Brain That Wouldn’t Die

I think it’s a shame the superstar actors and filmmakers of the Golden Age of Hollywood—the Bogarts, the Hepburns, the Wilders—rarely, if ever, made sci-fi or fantasy or horror movies while in their prime. Genre material such as that wasn’t taken as seriously back then. What kinds of films might we have gotten if it had been? Who knows.

Movies like Frankenstein or House of Wax really stand out amidst the mountain of schlock, but they also made stars out of the actors in them—Boris Karloff and Vincent Price, respectively, as opposed to stars coming to such movies. That’s not a bad thing, though, and it’s something we still see today, as Daniel Radcliffe and Kristin Stewart, for example, will attest.

Also, with so many old movies being rediscovered and reappraised by younger generations, “stars” are created retroactively by film nerds like us. In googling about the SF/horror flick The Brain That Wouldn’t Die, I noticed one of the movie’s stars, Virginia Leith, died last year. I didn’t think she was big enough to warrant an obit in The Hollywood Reporter, much less one that would use this movie as a selling point—I had certainly never heard of her. (She was in Kubrick’s first film, Fear and Desire, and had smaller parts in TV and film.)


I think Leith may be an example of a retroactive star, one made by future audiences. Brain must have been one of those late-night TV creature feature films genre fans ate up. Plus, its Wikipedia entry states there have been no less than four different stage adaptations of Brain in the past eleven years, including two different musicals.

In fairness, Leith’s is an unusual and memorable role: a disembodied head hooked up to some gizmos, with nothing to do but wait for her mad scientist boyfriend to attach her to a new body... that is, until she learns how to control a misfit of science locked in the nearby closet so she can get her revenge.

I won’t lie: I kinda liked this movie! Schlocky as it is, it’s got everything: violence (besides decapitation, there’s bloody, dismembered limbs, choking, and wrestling), sex (a number of hot chicks in swimsuits and stripper outfits), some weird science, a car crash—I mean, drive-ins were made for movies like this.

Leith is way more interesting as a disembodied head. As a regular person, the girlfriend of mad scientist Herb Evers, she’s bland and generic; as a head, she’s mad as hell at Evers for putting her in this situation when all she wants is to die. Her love for him turns to hate, and she’s able to take advantage of her unusual (to say the least) situation by manipulating the people around her. I found her riveting. 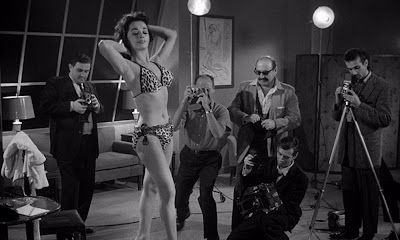 A better, and perhaps more progressive, screenplay, might have tried to play up Evers and Leith’s relationship before and after the decapitation. Evers searches strip clubs and artists’ studios for women with shapelier figures than Leith’s; I was hoping for some back and forth between them along the lines of whether he loves her for her body or her mind. That might’ve been asking too much of an early 60’s horror movie, though.

What really disappointed me was showing the monster at the end. Leith is able to communicate with the misshapen freak locked in the closet in the lab, an early victim of Evers’ gone wrong—and it’s because you can’t see the monster that he’s scary. He makes his presence felt in other ways, of course. When we finally do see him at the end, it can’t help but be a letdown, because he can’t be scarier than what we imagine him to look like. Too bad this crowdfunded remake from three years ago didn’t realize that. 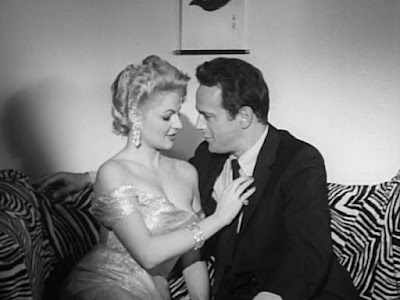 Would Brain have been a better movie with, say, Elizabeth Taylor and Montgomery Clift, and a bigger budget? Maybe, maybe not. Whatever aversion the big studios had to genre material was thoroughly overcome thanks to later movies like 2001, Planet of the Apes, and eventually, the original Star Wars, and now you’re nobody if you don’t have a SF/F film or TV project on your resume. Funny how such things change.
Posted by Rich at 7:00 AM