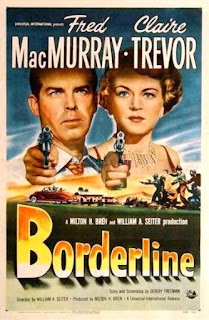 Recently there was a blogathon devoted to Claire Trevor and I wanted to take part in it so bad because I really dig her. I haven’t seen her in much, but her bad-girl characters were so memorable and she was so believable and sympathetic as them. I’m glad Crystal and Virginie put her back in the spotlight. Alas, I had too many other blogathons too close together to add another one, but I still wanna talk about her.

Sister Celluloid did a post about a Trevor movie called Borderline, a comedic crime picture with Fred MacMurray, and once again she was kind enough to embed the YouTube video. Borderline is It Happened One Night meets Anthony Mann’s Border Incident, and while it’s more funny-amusing than funny-ha ha, it was worth watching to see Trevor as a good girl!

The Brooklyn native graduated from Columbia and did a lot of stage work on and off Broadway before heading west to Hollywood. You probably knew she was a three-time Oscar nominee, winning for Key Largo in Supporting Actress, but did you know she also won an Emmy for a TV remake of Dodsworth? I’d love to see it if it’s available. 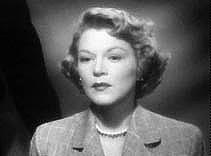 In the 80s, after retiring from acting, she took up mentoring young performing artists at the University of California-Irvine, to the point where after her death in 2000, the School of the Arts was renamed in her honor. From the Claire Trevor School of the Arts website:


Ms. Trevor was a frequent visitor to the School, sitting in on rehearsals and interacting with student actors and faculty. She liked getting to know the drama students and seeing their work, according to those who knew her at that time. She often spoke of the important role the Arts had played in her life, and she believed that using one’s imagination to its fullest is necessary in order to live a happy life. She was thrilled to be able to help the School’s students achieve their goals and assist them, in some small way, according to her friends.

Borderline, like I said, has a slight, gentle comedic touch to it, though it’s mostly a dramatic crime pic. It made me think of the kinds of movies Lucille Ball made in the 40s, before she came to television, and Trevor does feel like she’s channeling Lucy in places. It’s also an unusual role for a woman of the late-40s/early-50s in that she plays a undercover cop, one who was an intelligence agent during the war and speaks fluent Spanish. I would’ve loved to have seen a little more of this life than we do in the movie. 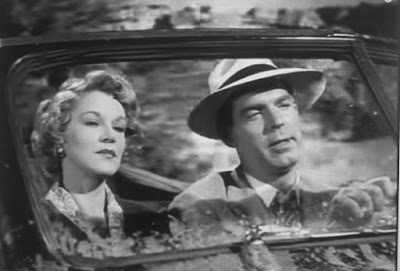 Trevor goes south of the border to infiltrate a drug-running racket in Mexico and expose boss Raymond Burr, once again playing the heavy, and at first it seems as if this will be her movie. Then she crosses paths with MacMurray, a G-man who’s also undercover, and suddenly they’re both on the run and it becomes a buddy road movie, where neither of them know each other’s true identities. Of course, they fall in love.

In the final reel, MacMurray is the one who does the heavy lifting and catches the bad guys while Trevor watches, which was disappointing, but seeing the two of them together is fun. They both come across as mature adults, and the humor is never over-the-top or inappropriate. The location shooting is good as well. 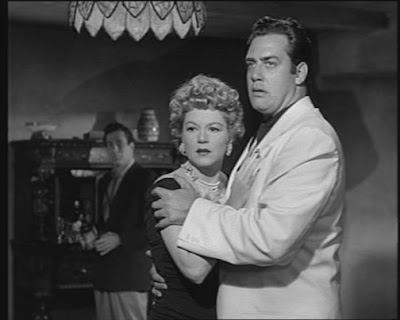 Trevor subverts her bad-girl image at first by having her character pretend to be one. We see her dancing as a chorus girl in a Mexican cafe, trying (and failing) to attract Burr’s attention, then turning to one of his henchmen, wearing a tight blouse off the shoulders and getting him drunk so he can take her to Burr’s hotel room. Trevor would’ve been 40 when she made Borderline, yet she still got to be sexy and seductive and brave, sneaking around Burr’s room looking for evidence of his illicit activities and surviving a shootout between Burr and MacMurray.

Borderline is not perfect, but it’s a nice showcase for Trevor, older but not having lost a thing, playing a rare kind of woman in the Old Hollywood era.
Posted by Rich at 10:30 AM