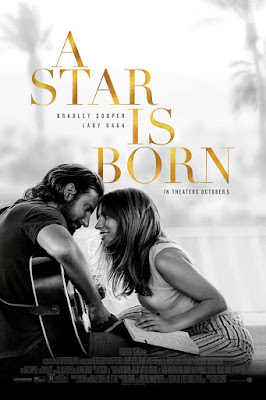 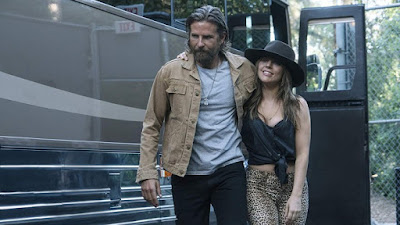 In 1976, Barbra Streisand changed the setting from Hollywood to the music industry, with less than stellar results. Hollywood has wanted a do-over for years, and many big names had been attached to a potential project.

Last fall, the modern version of this yarn finally hit the screen, and everyone went nuts enough over it for the film to scoop up multiple Oscar nominations, including Best Picture.

I would have been content to give it a pass, but Virginia really wanted to see it... and I owed her one. 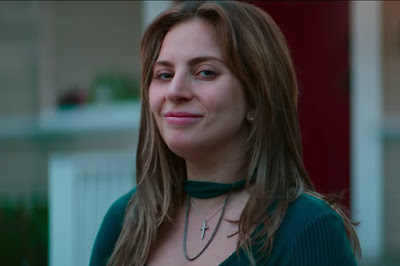 Bradley Cooper did double duty for this film, both starring, and for the first time, directing. And while Beyonce had been attached to this film for years, in the end, another pop music superstar stepped in: Lady Gaga.

The former Stefani Germanotta (Virginia, apparently, is a fan. Who'da thunk?) was one of those divas I had taken pains to avoid for years because of her seeming omnipresence on the radio and the TV and the internet. Plus, I'm sorry, but "Lady Gaga" really is a silly stage name. 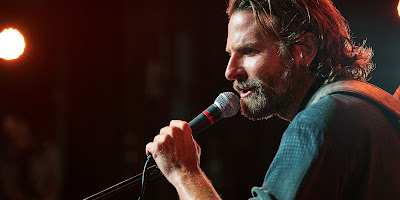 Props to LG, though: she was good. Is she hot? Of course, but she's hot in a kind of everyday manner. She almost looks like someone you might see on the subway as opposed to, y'know, A STAR.

She's a legit singer — I was convinced of that from the moment, early in the film, when she sung "La Vie en Rose" in French (Virginia said she sung it with an American accent) — but as an actress, she also had chemistry with Cooper. She even had a fleeting, blink-and-you-miss-it full frontal nudity moment!

As a director, Cooper got excellent work from his cast (totally did not recognize Andrew Dice Clay as LG's dad!) and most of his shots and camerawork were good, if not spectacular. 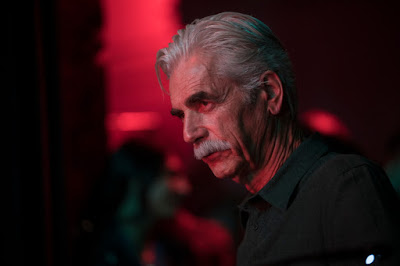 Despite all of this, I couldn't help but think of similar "rise and fall of an artist" movies, and not just the other ones named A Star is Born. The Jeff Bridges film Crazy Heart from several years ago is the best example, but as I watched, I also thought of Walk The Line and a little bit of Almost Famous, too.

I'm sure for those audiences unfamiliar with this story, it was a Big Deal; double if LG's fans were among that number (likely). But while it was done well overall, it's still A Star is Born! It didn't exactly surprise me. 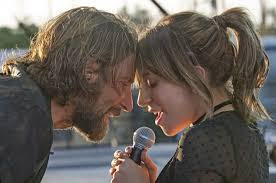 Virginia and I saw it on my birthday. She got me one of those detachable keyboards for my iPad. I can type on the iPad screen fairly well, but this keyboard makes it easier, plus it has a USB port.

It was nice to be back in Cinema Village, though we saw the movie in one of the smaller side theaters instead of the bigger one. I was surprised they even had a big Hollywood movie like this.
Posted by Rich at 2:00 PM