History of the World part I 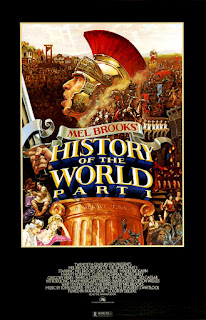 Oy gevalt, could we use some comedy right now! For a long time, I had avoided Mel Brooks’ History of the World part I because I had read it wasn’t as good as Blazing Saddles or Young Frankenstein, and as it turns out, I was right.

History was more cartoonish, but it lacked Saddles’ subversive bite or YF’s knowing winks to film history—it made me think of other films, like Life of Brian and Spartacus, but it made me wish I was watching those films instead. If this had been made by anybody else, it might’ve been passable, but Brooks sets a much higher standard for laughs than most.

History is exactly what it says on the tin; a series of vignettes set in different time periods throughout world history: the Stone Age, Biblical times, Ancient Rome, the Dark Ages and the French Revolution. Brooks appears as a variety of characters, along with his regular repertoire of actors—Harvey Korman, Madeline Kahn, Cloris Leachman, etc.—plus Gregory Hines, Dom DeLuise, Bea Arthur, and Brooks’ old boss from television, Sid Caesar. Orson Welles narrates! 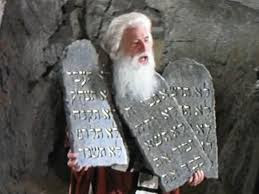 The lone highlight is Brooks’ song-and-dance number about the Spanish Inquisition. Like “Springtime for Hitler” in The Producers, he once again takes a horrible moment in human history and makes it funny, and the result is brilliant. Had me in stitches and made me wish the whole movie was a musical.

Months ago, I had joined a Mel Brooks Facebook group, in part, because I had read so much about how political correctness was killing comedy—and I had written a little about that here—and Brooks’ movies were a reminder of a time when people could say what they wanted without fear of somebody getting their panties in a bunch. I was gonna use History to discuss this further, but it’s not as important a topic at the moment. 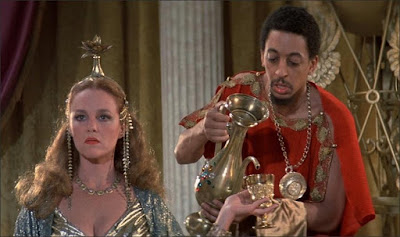 What else? History was Hines’ first movie; he replaced Richard Pryor. (It is a great shame that Pryor never acted in a Brooks film, in part because of his problems with drugs during the 70s.) I remember Hines more for his dancing than his acting, though he was a minor leading man during the 80s. His role here feels evocative of Pryor.

Arthur only appears in one scene, but it’s with Brooks. I watched The Golden Girls as a kid (an 80s sitcom that still holds up! Amazing), but I never really appreciated how talented an actress she was until later in life. She could be more than a little intimidating—she was a Marine, after all—but her wry, sassy sense of humor made her accessible and even gave her a touch of class. 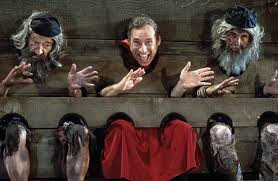 I haven’t seen DeLuise in a lot of stuff. I like him, but in this, he plays Emperor Nero too broad and flat. His character isn’t as conniving and slick as, for example, Zero Mostel in The Producers. DeLuise’s brief cameo in Saddles was way better.

You’d never know it from seeing her in Brooks’ movies, but Leachman’s actually very pretty. So why does Brooks always make her so ugly? Here she’s a bedraggled French Revolution peasant who makes Frau Blucher [horse whinnies] look like Marlene Dietrich. I imagine she was a good sport about it, though. She had to have been!

Kahn should’ve been a superstar. Brilliant comedic timing, excellent singer, sexy—she was the total package. Months ago, a friend told me about the first film she ever appeared in, an Oscar-nominated short that parodies Ingmar Bergman called The Dove. Take a look, it’s not bad.

Korman could’ve made reading the phone book funny. The Carol Burnett Show was one of my favorites growing up and he was a big reason why. He was always a welcome presence in Brooks’ films, although his role in History seemed like a knockoff of his Saddles character. I liked watching him anyway, because he was Harvey Korman, but it was still a bit disappointing.

Like I said, “The Inquisition” made me wish the whole movie was a musical. Brooks always has musical numbers in his films, but it wasn’t until his films were adapted for Broadway (and then re-adapted for the big screen again) that we got to see what a complete Brooks musical would be like. Better than nothing, I guess.
Posted by Rich at 9:00 AM