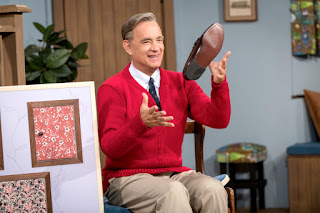 Joker director Todd Phillips, previously known for his raunchy R-rated comedies like The Hangover trilogy, has said one reason he made Joker, a drama, was because it was difficult to make irreverent comedies, since audiences are more easily offended these days.

Is it true? The numbers don’t lie: when the tween comedy Good Boys opened at number one this summer, it was the first R comedy to do that in over three years. Once again, PG-13 appears to be the safer choice for Hollywood studios now; in a recent interview, Eddie Murphy, whose R-rated Rudy Ray Moore biopic Dolemite is My Name is playing on Netflix, confirmed as much. This Variety piece from 2017 also theorized a change in the culture, but cited the immediacy of late-night television as a factor...

...which brings us back to Phillips’ theory. I know my tastes have evolved over time. I don’t seek out R comedies (Murphy’s movie notwithstanding), but I don’t think I ever did—unless Kevin Smith made them. Why don’t I go to R comedies as much anymore? If I’m being honest, I suppose I want a little more... sophistication. All those Lubitsch and Wilder and Sturges movies made an impression! Plus, a movie like The Hangover works better if you go with friends, and practically none of my friends, who are over forty, like me, have any interest in them either.

Fear of being offended is not a factor for me (I laughed at the “porch monkey” jokes in Clerks 2), yet I can’t deny “woke culture” is a palpable presence these days. Twitter users are ready and willing to pounce on anything that carries even a hint of being un-PC, and if they have led to a decline in irreverent comedies, that would be a shame and a waste. It may be with the best of intentions, but I don’t like the thought of pop culture settling into a safe middle ground where everything is sanitized. If I choose not to see a Hangover-type movie, that should be my choice—and I should be free to change my mind without fear of censure. At the same time, I hope I don’t have that fear-of-offense attitude myself, but if I do, I’m gonna work at changing it.

Last month, Virginia and I had the privilege of attending a New York Film Festival screening of one of my favorite classic films, Dodsworth. It was a new restoration, screened at Lincoln Center’s Alice Tully Hall, and the daughters of director William Wyler, Catherine and Melanie, were in attendance for a Q&A, along with Manchester by the Sea director Kenneth Lonergan.

This was the first time I had seen it with an audience, and once again, I found the experience of hearing other people laughing at moments I didn’t necessarily find funny jarring. I’ve seen other film bloggers talk about this when it comes to old movies, and now I understand this feeling better: you see a film made in a different era, you connect with it, and then you see it with a crowd and that connection changes because others don’t react to it the same way you do. I doubt the audience thought Dodsworth was campy, and I don’t think they were being disrespectful; their reactions just rubbed me the wrong way. I don’t get like this when it comes to more recent movies, or if I do, the feeling’s not as acute. That’s the chance you take with an audience, but it’s okay.

Regardless, the restoration was beautiful. The Wyler sisters and Lonergan discussed casting, including William Wyler butting heads with Ruth Chatterton; Mary Astor’s great performance despite the scandalous divorce she was part of at the time; the overall acting; and the film in a historical context. Virginia loved the film, as I knew she would.

I saw Ad Astra again, this time with Ann, who wanted to see it. I think I understand the movie better the second time around. As I explained to Ann afterwards, the bigness of the movie, the Kubrick-meets-Malick aspect of the storytelling and filmmaking might have blinded me to the humanity at the heart of it all, but the second viewing made it easier to see the characters as people, and I appreciate it better. If you wanna talk about it further, spoilers are allowed in the comments to this post.


I’m gonna run another 5K, on Thanksgiving Day—the same one I ran last year. I’m gambling it won’t be as cold as it was then. It couldn’t be, right? Virginia will be out of town, so I’ll have to muddle through without her, but after this one that’ll be it until at least next March. Preferably April.

Le chronicles how early Hollywood grappled with the Spanish flu.

Monstergirl tells you everything, EVERYTHING about Oscar and Emmy winner Lee Grant—and has an exclusive interview with her.

The Grapes of Wrath reminds Rebecca of her grandparents.

Debbie talks about the first movie in which Vincent Price played a villain.

Paddy walks the moors with Sherlock Holmes in one of his greatest adventures.

Michael Palin becomes the first of the Monty Python troupe to be knighted.

In the Shining sequel Doctor Sleep, the Overlook Hotel is duplicated to perfection.

Here’s a thoughtful and sensible criticism of Martin Scorsese’s disdain for Marvel movies, from a historical perspective.

Speaking of Scorsese, check out 11-year-old Marty’s storyboards for a Roman epic movie he never made.

Why are Xfinity viewers of TCM mad?

Can you believe it? Kevin Smith and Jason Mewes are getting a Star on the Hollywood Walk of Fame!
Posted by Rich at 7:00 AM