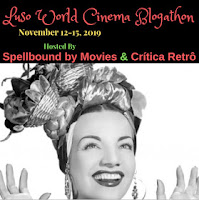 Portugal, and Portuguese-speaking countries like Brazil, may not come immediately to mind when one thinks of world cinema, but even if you don’t know the films, chances are you may know more actors of Portugese descent than you think. Who can forget Carmen Miranda, dancing with that basket of fruit on her head? Mary Astor, of The Maltese Falcon and many other great 30s and 40s films, was Portuguese on her mother’s side. More recently, Tom Hanks, Keanu Reeves, James & Dave Franco, Amy Poehler and Jasmine Guy, among others, have some Portugese roots.

Regarding the films, here’s one list of top Portugese movies, and here’s another list of top Brazilian films, keeping in mind there are other countries worldwide that speak Portugese—that’s called being “Lusophone”—and have their own film industries. Many Lusophone filmmakers have made their marks, but one in particular stands above the rest—in part because he lived so long. 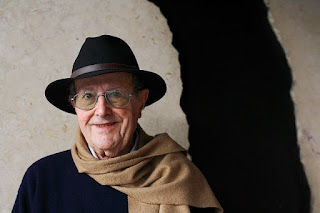 When Manoel de Oliveira died in 2015, he was 106 years old, but that’s not the amazing part. His last credited film as a director, according to IMDB, was a short film also from 2015. His last feature length film was in 2012! That he had uncommonly good health was one thing; that he used that good health to keep doing what he loved until the very end of his life was another thing altogether.

Obituaries paying him tribute appeared in The New York Times, Variety, The Guardian and other venues. His films weren’t the kind you would’ve found at your local Blockbuster, but people knew him and appreciated his work.

MDO was born in 1908 in Porto, Portugal as Manoel Candido Pinto de Oliveira to a family of industrialists. His father helped produce the first electric light bulbs in Portugal. Like his brothers, MDO worked on his father’s factories, but what he really wanted to do was act. Regrettably, Portugal was ruled by a fascist dictator that censored the film industry, so MDO had to look abroad for films and filmmakers he liked. He took acting classes. One of his early roles was in 1933, in Portugal’s second sound film, A Canção de Lisboa.

Two years before that, though, he made a film of his own, a documentary short called Douro, Faina Fluvial, about the Douro River in his hometown and the people who work along it. He took it to the International Congress of Film Critics in Lisbon. It did not go over well, so he re-edited it and changed the soundtrack and re-released it in 1934, which spurred him to keep at filmmaking.

In 1942, his persistence paid off with his feature debut, Aniki-Bóbó, also set in Porto, about a love triangle amongst street kids. This, too, got a poor reception because the kids acted too much like adults to the tastes of audiences at the time. Finally MDO said the hell with this and worked at his wife’s vineyard instead.

And that was it until 1955, when MDO chose to get back on the horse. He went to Germany to study the changes in color photography, and a year later he came up with The Artist and the City, another documentary short set in Porto, only in color, and this time he got the kudos. Still, it wouldn’t be until 1963 that he really broke through as a filmmaker, with the film Rite of Spring, a filming of a passion play in a small Portugese village. His approach to film changed with this film: he now believed his purpose was to represent reality, not simulate it.

Right when his career was taking off, though, he got arrested by the Portugese state police for criticizing the government. He did time for ten days before he was let go, but his film career slowed down for years.

The government changed, better means for film distribution developed, and MDO once again found new life as a director, beginning in the 70s and continuing through the 80s, alternating between fiction and documentary and building his rep. In 1985 MDO made a seven-hour film, The Satin Slipper, based on a French play. It was his first of many collaborations with actor Luis Miguel Cintra. It never got a theatrical release, but it played both Cannes and Venice; the latter film festival gave him a special Golden Lion award for lifetime achievement. He was in his seventies at the time. Little did anyone know he was far from finished.

Indeed, he only got more praise as a major filmmaker of note as he got older. All of the following accolades were given for films he made in the last 30 years of his long life: five-time Palm d’or nominee at Cannes, plus an Honorary Golden Palm and a Jury Prize award winner; four-time Golden Globe winner, plus a career achievement award; People’s Choice Award nominee at Toronto; three-time Tokyo Grand Prix award nominee plus a special achievement award; six-time Golden Lion award nominee at Venice plus career achievement and Special Grand Jury Prize awards; and lots more. No, he never got recognized by the American Academy, but who cares?

Confession time: I was gonna write about one of his films for this blogathon, one from the 80s called Francesca—and honestly, I did try to watch it—but I found it absolutely tedious and pretentious, hence the switch to an overview of his career instead. Now that I see what his career had been like, I respect the guy for making movies as long as he did, and who knows, maybe I might look at another one of his films to see what it is I’m missing... but I doubt it. I just wanted to learn about this filmmaker who made movies well past the point where most people would settle comfortably into retirement. I mean damn, 106! Wouldn’t you?

——————-
Other films by Portugese-language filmmakers:
Black Orpheus
The Given Word
Posted by Rich at 9:10 AM