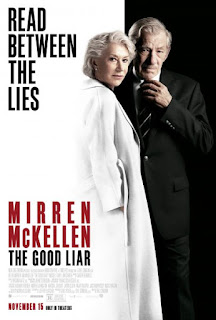 Sometimes two actors star in a movie for the first time and you wonder why they never appeared together sooner. Helen Mirren and Ian McKellen have both become big-bordering-on-household names later in their respective careers; the former as a result of her Oscar win for the 2006 biopic The Queen, the latter for his leading roles in the X-Men and Lord of the Rings franchises, but both of them have done consistently good work from earlier in life.

In an industry that worships at the altar of youth, it’s reassuring to know the two of them can be perceived not only as legitimate stars but glamorous ones, in their own ways. McKellen has this sly, almost roguish charm partly inspired by his great friendship with Patrick Stewart. He’s the cool grandpa who’ll not only let you play that Sex Pistols record that drives your folks up the wall, but he’ll buy you tickets to see them in concert and mosh in the pit with you!

As for Mirren, much has been written of her status as a GMILF icon. Recently, actresses like Jamie Lee Curtis and Linda Hamilton have found new life late in their careers as a result of reviving franchises they’re known for, and re-presenting themselves as badass mamas on par with their male counterparts. Mirren, by contrast, can be badass with a look better than other actresses her age can with a gun. She’s deliciously, irresistibly, unmistakably female—and powerful. 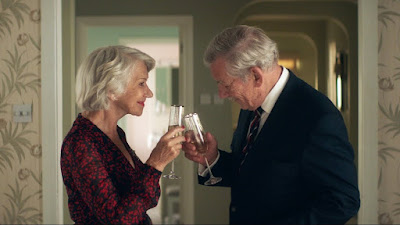 Therefore, the more I thought about it, the more I wanted to see them together in The Good Liar, the latest collaboration between McKellen and director Bill Condon, of Gods and Monsters fame—despite the mediocre reviews. Besides, as I said to Virginia after we saw it, it’s really nice to see thespians of their caliber together in a film that for once, doesn’t have mutants, aliens, giant robots or dragons. There’s still a place for films like this today, and if they’re good, they should be supported when possible.

And we thought it was good. Mirren and McKellen meet through an online dating service for seniors. They see each other, but he has an ulterior motive: he’s a con man trying to cheat her out of her savings. Her grandson suspects McKellen’s not what he seems, but then, neither is she... Lots of great location shots of London and Berlin, lots of double-dealing, an important World War 2 connection, and our two stars, in a story that only works with them as older people, not younger ones. They’re sexy without having sex, though there’s a very good in-story reason for that—-and while there’s some violence, it serves the story. Is it Hitchcock? Not quite, but it’s very watchable. 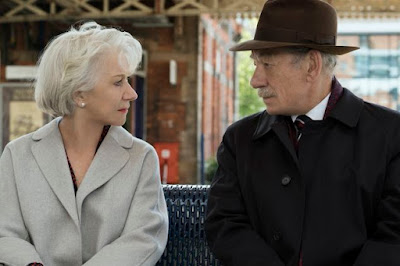 From what I could tell, it was close to a full house on an early Saturday evening, mostly full of old farts like me and Virginia. Going to the movies with her is a gas. She’s the type that’ll audibly react to everything: an “umph” at a notable plot twist, an “oooh” when things take a sinister turn, a “No, no, no” when the protagonist is on the verge of making the wrong decision—but with a big crowd, like last Saturday, I’m always worried someone will try to shush her, especially in a crowd of old farts! It didn’t happen, and I hope it doesn’t, but I can’t help but wonder...

I don’t go to many “senior-sploitation” flicks like this, probably because I don’t like thinking I’m the audience for them. I’m not even fifty yet! Still, the truth is, most of my friends these days are well north of fifty—hell, north of sixty. Don’t ask me why; it just happened that way. When I wrote about recent shifts in audience taste for comedy films, I acknowledged my tastes have changed from when I was younger. Does that mean I’ve gotten old? I fear it does—but if Mirren and McKellen are any kind of example, being old ain’t what it used to be.
Posted by Rich at 7:00 AM