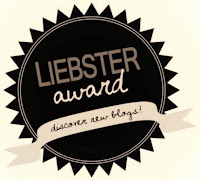 Sally from 18 Cinema Lane has recently discovered WSW, and likes it enough to bestow upon it the gift that keeps on giving: the highly coveted Liebster Award. Thank you, Sally. Now let’s see what it is she wants to know about Yours Truly...

1. Who do you think deserves a Lifetime Achievement Award?
Given his great success as a screenwriter, producer, and actor, how about Sylvester Stallone?

2. Which actor or actress would you like to see star in a Hallmark movie?
A word of explanation: Sally blogs mostly about Hallmark Channel movies, and from what I can tell, she’s a pretty big fan. I, on the other hand, can’t recall ever watching an original Hallmark movie, so I’m gonna have to pass.

3. What is your favorite ice cream flavor?
I dunno. Cookies and cream?


4. Is there a movie you’d like to see a sequel to? If so, which one?
I had an answer for this, then I learned it’s in development as a series. These days, with so many damn channels and other outlets, combined with an eagerness to further develop pre-established IPs (as opposed to, y’know, creating new ones), Hollywood could make a sequel or a spin-off from almost anything within the last 30-40 years, especially if it has a genre element—so my new answer is, give it time. If there’s money (and a fanbase) in it, they’ll get to it sooner or later.

5. Which book is your least favorite?
Tried reading A Confederacy of Dunces once. Don’t think I made it to page 50. As a prose writer, I know the protagonist doesn’t have to be likeable to be compelling, but this book really tested the limits.

6. Where would you like to spend the day with your favorite fictional character?
I don’t have one single favorite, but I know I would enjoy hanging out in Brooklyn with Ella from Bells Are Ringing. Lunch at a Manhattan deli, then walking over the bridge into DUMBO and then the park, where we could ride the carousel and people-watch for awhile. Then we’d go into her old neighborhood, Brooklyn Heights, where she could show me all her favorite spots. Then we’d have dinner on Montague Street and dessert on the promenade (where she danced with Dean Martin’s character in that red dress). Most importantly—no phone calls!

7. Has there been an event you’ve always wanted to attend? If so, what is it?
The more I read about the TCM Classic Film Festival, the more I’d like to go there one day, especially if it means hanging with my fellow film bloggers.

8. Did you receive a prized possession since you started blogging? If so, what is that item?
Do the press passes from the film festivals I’ve been to count?

9. What is the best advice you’ve ever received?
“Keep the ball low.”

10. Do you have a wish for a fellow blogger? If so, what is that wish?
Hmm. Crystal from Good Old Days just announced on Facebook she was writing a Katharine Hepburn biography for a British publisher, so to her, I would say good luck and I hope her book is distinctive.

11. What is one of your goals for next year?
Next year will be the tenth anniversary of WSW, so I guess one of my goals is to keep this blog going long enough to reach that milestone.

And eleven things about me: I’m left-handed; I own an iPad Virginia gave me as a birthday present; all three of the 5K’s I’ve run in (including the one this month) are in Queens; I almost drowned once, in Massachusetts; my copy of the graphic novel Watchmen is autographed by artist Dave Gibbons; my current manuscript is partially set in a fictitious Midwest town I created through a Facebook game; one summer, as a kid, I went to a computer camp; I can’t snap; I’ve been to San Francisco and San Diego but not Los Angeles; Virginia and I went to the Queens Farm in September and got lost in their corn maze; and I like to make mini-pizzas on whole wheat flatbread with turkey bacon as a topping.