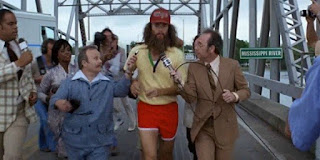 To be honest, running, for me, is not the transcendental experience it is for some. I jog up and down a small, three-block side street adjacent to my apartment building. I’ve done it in warm weather and now, Zod help me, I’m doing it in cold weather too. It’s lonely, grueling work. Every weekday it’s an effort to push myself to keep going, to keep my legs and feet in motion when all I’d rather do is stay in bed.

I don’t trust my feet. I’ve fallen more than once, not due to poor ankles or weak bones or anything like that, but just because. Falling has always been a fear of mine, and a part of me can’t help but think something is out on the pavement waiting to trip me up, no matter how smooth it may seem.

And yet I still run. Virginia is one reason why, as she is for so many things I do these days: she’s not a runner, but her own ongoing struggle to keep the weight off inspires me—and hell, I wanna look good for her. Why not? I also remember the health problems I had that landed me in the hospital only three years ago, and I do not want to experience them again. I’ve joined a Facebook running group, and seeing other people go from being large and round to leaner and fitter, really makes me think it’s possible for me too.

But I gotta run a lot.


The five-kilometer run is the most democratic of races. From what I’ve experienced of them, they’re the most open to newbies; if you can run or walk 3.2 miles in under an hour, you’re in decent shape and on your way to being a better runner—so the assemblage of contestants tends to be more... informal, to say the least. Looser, more relaxed.

They’re also the races most likely to engage in themes. I haven’t been in a themed 5K yet, but if there is one, it’s either a charity run, to benefit things like war veterans or MS or AIDS research, or it’s devoted to events like a holiday or the start of a season, or it’s something nuttier! Here are some of the weirdest.

I could probably stick to nothing but 5Ks for as long as I run, but it’s my hope to run in a 10K next year. After that, who knows? Could I run in an actual marathon? The thought is oddly tantalizing...

One of the many 5K themes, as you might imagine, is movies. Here are five examples:

- Back to the Future 5K. This one starts, not at 10:04 as you might imagine, but minutes before Daylight Savings Time ends, early in the morning, so when the clocks go back an hour, you experience “time travel” during your run! When I was much younger, I used to imagine if I stayed up for DST, forwards or backwards, I’d feel the “temporal shockwave” as it happens (seriously, that’s how I thought of it), so this appeals to the geek in me. There have been BTTF-themed runs in Oklahoma, Virginia and Georgia.

- Jurassic World Run. Universal Studios has a “Running Universal” series of races, such as this one, happening this weekend in Hollywood, in fact. Inspired by the Jurassic Park/World films, not to mention the JW ride, you get to sprint through the theme park and part of the Universal backlot, with opportunities for pictures with props and models from the movies, of course. Since it’s presented by the studio itself, you can indulge in higher-priced levels with additional perks that last all weekend long.

- Minion Run. Also part of the Running Universal series is this 5K devoted to the little yellow goons from the Despicable Me movies. Wanna see this year’s highlight reel?

- Ghost Bustin’ 5K Virtual Run. To celebrate the release of the all-women Ghostbusters movie in 2017, a virtual 5K was held online. What’s that? It’s one done on the honor system: over a specified period of time, you can run your five kilometers all at once or in stages. One assumes fudging one’s numbers runs counter to the spirit of such a race; how often it’s done anyway is a matter of speculation. 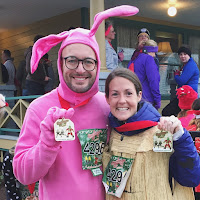 - A Christmas Story Run. In Cleveland of course, this one sounds special: it covers roughly the distance between the Christmas Story House & Museum, the original location used for Ralphie’s home in the movie, and the former site of Higbee’s Department Store, where Ralphie first spies the Red Ryder BB gun. This almost makes me wish I lived in Cleveland! The 2019 edition is coming up next month.