He Walked By Night 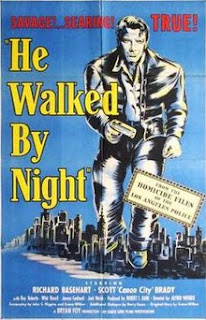 The cool kids amongst the classic film blogger crowd like to devote this time of year to blog and/or tweet about film noir flicks. They call it “Noir-vember” (get it?). When it comes to WSW, I mostly prefer to march to my own drum, but it occurs to me this is a nice excuse to talk about a film I first watched last year, as research for my Dark Pages article—a film that amazed me.

He Walked By Night is credited to Alfred Welker as director, but Anthony Mann finished it when Welker was no longer available. It’s based on a true story about the search for an LA cop killer and robber who had the police befuddled because he was smarter than the average bear. The film is very much of a piece with Mann’s other noir work, such as T-Men and Raw Deal, as well as other police procedurals from the era like The Naked City.

My Dark Pages piece was about Mann and his favorite cinematographer, John Alton, a guy who really put the noir in film noir due to his deft understanding of light and shadow and how to photograph it. Since they both worked on Night, I had watched it to learn more about them. The familiar noir tropes are there—narrator; hard-boiled lead character; the terse, gruff cops and their lingo; the chase—but it still works! In an era of CSI and Law and Order and their numerous spin-offs on TV, it’s easy to forget how these kinds of stories still have the ability to entertain, but for me, at least, this film did. 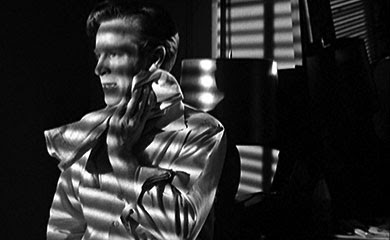 Richard Basehart is top-billed as the amoral killer, a role in which he could’ve laid it on thick, but he doesn’t; in fact, his slow-burn approach is part of his character, who’s described on the surface as average-looking, unassuming, kinda bland. When we see his anger, though, it’s on a hair trigger; you get the sense it wouldn’t take much to set him off—but when he’s on the run, his fear, mixed with desperation, is just as clear on his face, however subtly. Basehart’s lack of melodrama makes you watch him closer.

In a story like this, plot is far above character, but there are revealing moments: the cop on the phone, asking about another cop’s child’s wedding while getting important information; the crippled officer visiting his partner and joshing with him as they go over the case; even the killer’s relationship with his dog, who acts as a sentry against intruders to their bungalow. Even the plot itself goes off the track in unexpected ways: in one scene, a detective, disguised as a milkman as he searches for the killer, runs into a chatty housewife with issues of her own. Little things, but they add life and variety to the story. 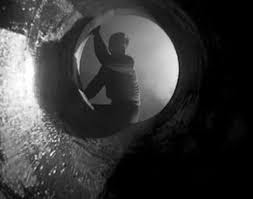 The highlight, however, is the climax, in which the cops chase the killer through the underground storm drains of LA. Here’s a brief but checkered history of the system and the river that necessitated its creation. Basehart runs through the tunnels with his flashlight the only illumination, while in the distance the cops pursue, their lights dots in the background that turn into penetrating beams of light. Can you imagine not only filming this in black and white, but directing it? Determining where everyone is to go amidst the maze of tunnels, finding appropriate spots to stage shootouts, contending with the different kinds of sounds and sights to produce something coherent for film and not just a murky mess? But Mann and Alton did it, and well.

A young Jack Webb plays a forensic scientist in a supporting role. This is significant because in talking to the police technical advisor between takes of Night, Webb was inspired to create more police-procedural stories, done in a similar faux-documentary style that emphasized the process in which the cops catch the bad guys, and thus was born, a year later, the radio show-turned-TV show Dragnet.

Night has to be one of the most important noir films ever made. It’s in the public domain, so it’s easy to find and watch. If you’ve never seen a noir film before, start here.
Posted by Rich at 8:00 AM