Metallica: Some Kind of Monster and Through the Never 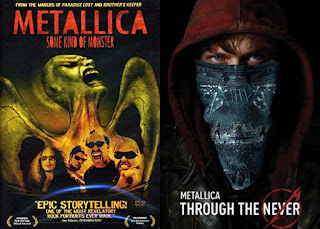 One of my Spotify playlists is called “Headbangers Ball.” It’s for metal and punk bands: Black Sabbath, Judas Priest, AC/DC, Black Flag, The Sex Pistols, etc. Generally, I have anywhere between three to seven songs for each band, for a total of over three hundred.

I have over twenty songs on the playlist for Metallica alone.

I don’t recall when I first discovered the San Francisco quartet, but I do remember buying their album And Justice For All on cassette, when it came out in 1988, around the time I seriously got into metal. I might’ve learned about them from my friends, or from the radio, maybe even from MTV—this was also around the time I first got cable.

Like lots of metal bands, Metallica writes songs about abstract concepts: war, violence, death, fear, politics, religion—you get the idea. Unlike lots of metal bands, they perform with a ferocity and a virtuosity unmatched in all of rock. If you’ve ever seen or heard them live, it’s like they operate at another level. Historically, despite changes to the band through the years, there have only been four active members at any one time, yet they engage the crowd and make them part of the show like few bands are capable of doing. It helps that their fans know the words to their most popular songs: “Enter Sandman,” “For Whom the Bell Tolls,” “Creeping Death,” “One,” and of course, “Master of Puppets.” When band and audience combine, the music becomes almost alive.


Metallica’s records have sold in the millions despite almost no commercial radio airplay and they’ve enjoyed tremendous financial success, but internal strife and tension came close to destroying them. This was the subject of the 2004 documentary Some Kind of Monster, an account of why they fought each other and how they overcame their problems, all during the making of their 2003 record, St. Anger.

A professional problem-solver was brought in to mediate Metallica’s disputes and guide them—singer/guitarist James Hetfield, drummer Lars Ulrich, and guitarist Kirk Hammett—towards harmony. Bassist Jason Newsted, not believing they needed an outsider to solve their problems, had quit the band, so part of the movie includes the search for his replacement. At one point Hetfield, plagued by issues of his own, quit during filming, and it was uncertain when or if he’d return.

Monster is unique among music documentaries. Co-directors Joe Berlinger and Bruce Sinofsky capture the band airing out all their dirty laundry to each other: the jealousy, the resentment, the creative conflicts, that come from twenty years together as close collaborators, and it’s bizarre to watch. It’s as if they were on a season of The Real World. Hetfield and Ulrich are as tight as brothers, but their visions for the band and its direction put them at polar opposites, with Hammett caught in the middle. One is easily reminded of the filmed version of the Beatles’ Let It Be, only they had no mediator to advise them, and indeed, they split up after recording that album.

Metallica’s music is vital to the movie and to help understand its creators, so I hesitate to say even non-fans can get something out of Monster. The fact is, though, anyone involved in a long-term creative partnership with other people encounters tensions sooner or later, and watching this movie could be enlightening. If nothing else, it’s a rare portrait of a modern rock band, warts and all—one doing its best to move beyond the “sex, drugs and rock ‘n’ roll” stereotype into a higher place.

In 2013, Metallica made a concert movie, woven with a loosely-connected narrative, called Through the Never. Remember when Michael Jackson made the video for Thriller as a short film, with a legitimate director and everything? This is a similar concept, except it’s feature-length. Nimrod Antal (yes, that’s really his name) co-wrote the screenplay with Metallica and helmed the whole thing, concert footage and narrative both. Dane DeHaan (he was in Amazing Spider-Man 2) plays a roadie sent out on a routine task during the concert, only he picked the wrong night to be on the streets. Think Scorsese’s After Hours directed by Zack Snyder.

The band is better than ever with the addition of bassist Robert Trujillo. Monster shows the auditioning process for a bassist, and Trujillo stands out not only for his playing but for his style: standing spread-eagle and holding his bass almost like an upright. In concert, he whips his long hair back and forth and prowls the stage like a panther with Hetfield and Hammett, while Ulrich bangs away in the center.


Hetfield always struck me as a little intimidating because of his live presence—profane, feral and aggressive—but now that I’ve seen the other side of him in Monster, the side that watches his little daughter in ballet class, he’s a bit tamer now. Indeed, the larger-than-life image Metallica projects that can make them seem like demigods onstage feels tempered after seeing them in Monster. In Never, they looked like musicians again, but musicians at the top of their game and having fun.

DeHaan’s role is almost wordless; mostly he just looks either befuddled at what’s going on in front of him or scared he’s gonna get killed. The narrative looks like it’s supposed to be About Something, what with the cops and rioters and the emphasis on DeHaan’s little votive figure he has with him the whole time or whatever it is, but after awhile I stopped caring. The whole thing is pretty silly. Eventually the narrative appears to spill into the concert and reality looks less real. That was a clever moment, but it’s fleeting and not taken advantage of in any way.

Monster is the better movie by far, but if you’re a fan, this would make a decent twin bill.
Posted by Rich at 7:00 AM