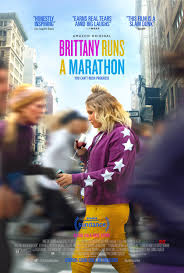 This was my first movie at the Kew Gardens since a driver backed into the front doors last Friday, knocking them down but causing no other damage, to people or property. When I heard the news, and after I was assured no one was hurt, I was scared, I admit it. I’m glad the damage was not extensive, because I do not wanna lose this place—and certainly not because of an incompetent driver, of all things. So now that that’s out of the way...

I’m a fan of the New York City Marathon. When I was younger, I’d go to other boroughs every year to watch the race but now I stick to Queens. The course goes over the Pulaski Bridge from Greenpoint, Brooklyn into Long Island City for a brief spell before the runners take the Queensborough Bridge into midtown Manhattan. Queens Plaza is closed off to vehicle traffic for a change and it’s great to walk the streets there.

I have fantasized about what it would be like to run in the Marathon. One year, my friend Bill (not the  guy from the video store; someone different) ran in it and I waited for him at the Manhattan end of the Queensborough Bridge, but I don’t recall seeing him. It’s been my observation in the past that you don’t have to be built like Usain Bolt to run a marathon; I have seen runners, male and female, with figures close to mine, running with everyone else, which always amazes me—but I never imagined it as anything other than a pipe dream.

Last Thanksgiving, I ran a 5K for the first time, and while it was exhilarating, I do not feel ready to upgrade to a full 26.2 miles yet—but that pipe dream of running a marathon—any marathon, not necessarily the big one here in New York—feels a bit more possible. A tiny bit. 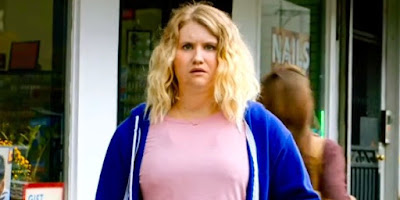 So when I saw the trailer for the movie Brittany Runs a Marathon, I knew I had to check it out, because I saw a whole lot of myself in it. Based on a true story, it’s pretty much what it says on the tin—the story of a... let’s call her pleasingly plump young woman desperate to lose weight for health reasons (and improve her overall life in the process) by taking up running. There’s a romantic subplot, of course, and it all takes place in a New York I recognize as mine.

Mad props to star Jillian Bell for losing forty pounds and actually running the Marathon for this movie (though she didn’t actually run the entire course), but that aside, she’s very likable. Brittany is self-depreciating about her weight, yet she uses her humor to keep people at arms length—she doesn’t always do what you think she should, which factors into the plot late in the film. Writer-director Paul Downs Colaizzo is friends with the real Brittany, so he knows her well enough to translate her story to film.

Brittany runs a 5K first, and I was glad to see that, but the film doesn’t go enough into her eating habits, which she would have also had to change to help her lose weight. It certainly doesn’t address how difficult it is to resist temptation after a lifetime of eating whatever one wants without care of the consequences, or of how much nicer it can be to cook for oneself instead of eating takeout all the time—but maybe Brittany didn’t cook much. Dunno. 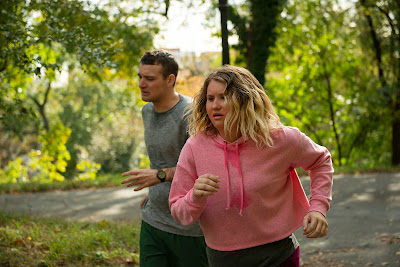 As for public perception and dating when you’re fat, well, yeah, I get that it’s different for girls, and the movie addresses that aspect, but us guys have to deal with that too. We see Brittany try to date as she loses weight, and we even see her diss a fat woman (with a boyfriend) during Brittany’s lowest point before she recovers.

I doubt I would’ve gotten as far as I have in my own personal battle of the bulge without Virginia. It was her who took me seriously when I expressed what I thought was an off-the-cuff comment about running the Marathon and it has been her who has encouraged me to run a 5K and motivated me into getting in better shape, in part by setting an example. She too has lost a bunch of weight (I met her after she did it), mostly through dieting and weightlifting. She doesn’t care for running. When I finished my 5K last year, I got a little medal, among other things. I gave it to her, because she made it possible.

Do I worry about my looks in relation to her? All the time. I’m no longer a spring chicken. The day my parts won’t work anymore is never far from my mind, and I worry whatever I do to make myself presentable for her is never enough... but after a year and a half, she’s stuck with me. You can’t imagine what that means to someone like me. 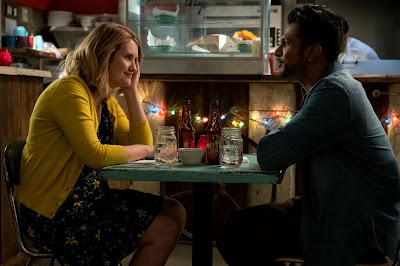 This Sunday, I’m gonna run my second 5K. I’m trying to be cool, since I’ve done one already, but a part of me is still on tenterhooks, thinking something might happen to me and I won’t be able to finish or whatever. I’m gonna do it, though. Will I ever run a marathon? Eh... ask me again in five years. These things take time.
Posted by Rich at 1:26 PM