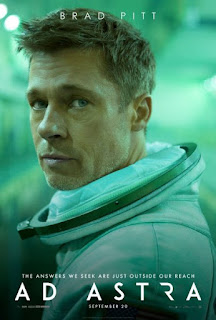 I hope this doesn’t spoil the movie for you, but don’t expect aliens to appear in Ad Astra. This shouldn’t be a spoiler because director James Grey has alluded to this point in interviews, for one, and it’s important to know because it’s easy to imagine this as the kind of movie that might have aliens, coming as it does after Interstellar, The Arrival, Contact, The Abyss, and similar movies where their presence fills the protagonist(s) with awe and we don’t know what to expect from them because they’re so far advanced from us. Ad Astra seems like it’s in that vein—but it’s not.

That said, I wasn’t as blown away by it as I had hoped I would’ve been—at first. Brad Pitt’s an astronaut in “the near future,” the son of Tommy Lee Jones, who was a legendary astronaut in his day. Jones went on a deep space mission years ago, vanished, and was presumed dead. Now there’s evidence he may be alive and stirring up big trouble, so Pitt is sent to investigate.

It’s Pitt’s movie from start to finish, and he gives a wonderful performance, reminiscent of Ryan Gosling in First Man but much more reflective. In the pursuit of his goal, Pitt does some surprising things which seem justifiable at the time, but then you look back and think, hey wait, he really did that, didn’t he? His character is so invested in keeping his shit together, though, and not wigging out, you don’t think of him as crazy—and this is a vital point, because the nature of his profession requires him to maintain an even keel, and the strong possibility that Jones might have lost his marbles permeates throughout the film. Pitt does not want to be like Jones, who was absent for much of his life on account of his job, but Pitt can’t help but admire Jones for the things he has accomplished. Actually, working it out like that just now has made me get a better grip on the movie. 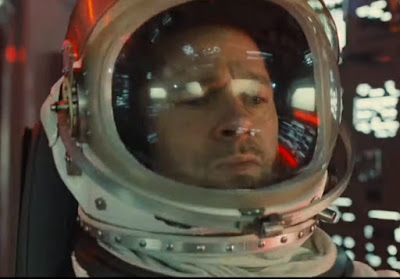 Right up until the movie’s climax, I expected some deus ex machina appearance by aliens. Jones’ mission was to detect the presence of extraterrestrials, and he’s pretty convinced they’re out there, despite the lack of concrete evidence. Some of us are like that, aren’t we? I’ve talked about that before. The possibility that humanity really is all alone in the cosmos—or at the least, that aliens are so far away they’ll never detect us—is scary; it goes against a lot of notions we’ve cultivated about ourselves and our place in the universe, many of them built up through our popular fiction. I don’t want to believe it, even now—and a definitive answer will likely not come within my lifetime.

I was going to say that Ad Astra was befuddling, but now that I’ve written about it, it seems less so. Don’t know if I’ll get a chance to see it again this year, but I hope I do. I would say more, but each person needs to interpret a movie like this for themselves.

And if I do see it again, I hope it’s with a better audience. The screening I attended had a mother with a teenage kid who might have had some mental issues, to put it kindly. He giggled intermittently and audibly throughout the movie, which had little that could truly be considered funny. All things considered, he could’ve acted much worse, but he was a distraction. He wasn’t in control of himself, though, so what could I do? 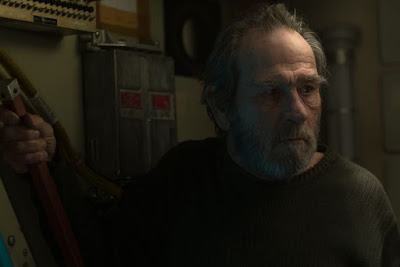 Don’t get me wrong; I’m sympathetic to parents of children with “special needs” and they should get to unwind like everyone else, but if they can’t get someone to look after their kid while they go see an adult film (not that kind of adult film), perhaps they should reconsider their plans. Ad Astra wasn’t ruined for me, but I couldn’t give myself over to it as completely as I would’ve liked—so know your kids before you take them to a grownup film... and if you think they can’t hack it, or will act inappropriately, do us all a favor and stay home.
Posted by Rich at 7:00 AM