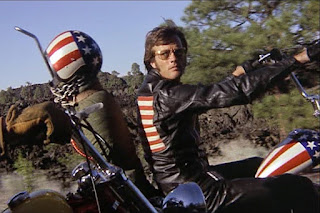 About Peter Fonda: I saw Easy Rider during my video store days but I didn’t understand its significance in movie history until later, reading about how it heralded the youth movement in Hollywood during the late 60s and 70s. He was part of a cinematic revolution that led to some outstanding movies, and for that we should all be grateful.

In Peter Biskind’s New Hollywood tell-all Easy Riders, Raging Bulls, Rider director Dennis Hopper, who was high as a kite for much of the film’s production and fought Fonda constantly, said this about the film:

...”When we were making the movie, we could feel the whole country burning up—Negroes, hippies, students,” he said. “I meant to work this feeling into the symbols in the movie, like Captain America’s Great Chrome Bike—that beautiful machine covered with stars and stripes with all the money in the gas tank is America—and that any moment we can be shot off it—BOOM—explosion—that’s the end. At the start of the movie, Peter and I do a very American thing—we commit a crime, we go for the easy money. That’s one of the big problems with the country right now: everybody’s going for the easy money. Not just obvious, simple crimes, but big corporations committing corporate crimes.”


I need your advice. A couple of weeks ago, I read that Morgan Spurlock’s latest film, Super Size Me 2: Holy Chicken had been shelved for months on account of the revelation that the documentary filmmaker had sexually harassed a co-worker, cheated on his wives and girlfriends for years, and had been accused of rape back in college.

I haven’t talked about the “Me Too” movement much here because I think it’s pretty damn self-evident that sexual harassment is wrong, full stop—and if there’s a line of women out the door saying So-and-So took liberties with them, well... innocent until proven guilty and all that, but I’d say the case doesn’t look too good for old So-and-So. I just don’t want it to turn into a witch hunt for molesters.

Spurlock, however, was different: he confessed. No one outed him; he came forward of his own free will to admit to his wrongdoing and vowed to be a better man. Now you can say, oh, he was coerced into this by someone ready to come forward, as opposed to him having a crisis of conscience he could no longer live with. Maybe. That’s certainly possible... but given the fact that this sort of thing has affected all walks of life and has consistently been news for months, which he mentions in his confession, I’d rather give him the benefit of the doubt. Someone has to—we’ll probably never know for sure one way or another.

SSM2 is finally getting a theatrical release this month. Despite its mediocre reviews (a 56 on Rotten Tomatoes so far), I’d like to see it because I loved the first SSM movie, and it’s set in Columbus, my former home, which I still miss. I totally understand the desire to boycott and shun those who have been tarnished due to similar allegations, but assuming he’s sincere and that he didn’t have a gun to his head when he made his confession, I think Spurlock coming clean like he did counts for something. And again, assuming he’s sincere, which I truly hope he is, forgiveness has to start somewhere.

Therefore, my question to you is: should I see Super Size Me 2?

Next month is the Murder She Wrote Cookalong at Silver Screen Suppers, and this week, I plan to buy the ingredients for the recipe I’ll cook for the event, chicken paprika. When it comes to choosing what to cook, I rely on three criteria: can I afford it, can I make it, and will I like it? I’ve never had chicken paprika before, but I’m guessing I’ll find it agreeable, and I have some of the ingredients already. I often take pictures of the finished dish to post on Facebook, but never of the dish in progress, but I’ll have plenty of light, and though none of you will be able to sample it, I hope it’ll at least look appetizing.


So Virginia recently found out, through some research done by a family member, that she’s related to screenwriter Ernest Lehman, and if you know anything about him, you know he’s written screenplays for some of the biggest movies ever made: The Sound of Music, West Side Story, North by Northwest, Who’s Afraid of Virginia Woolf?, Sabrina. She never met him. Perhaps we’ll go see one of those flicks the next time the opportunity presents itself: maybe if they play the Film Forum or the Loews Jersey City...

Good news: the staff and management behind Movieworld, the Eastern Queens neighborhood theater that closed last summer, have found a new location—only this time they’re on the Nassau County side of the border, in Great Neck. They’re now called the Squire Great Neck Cinemas. General 2D admission is $10, matinee is $7 with $6 Tuesdays, so the prices are still great. It won’t be as easy for me to get out there, but I’d like to see at least one film there. We’ll see.

Raquel reviews a book, produced by TCM, about the history of black cinema.

Virginie bonds with Greta Garbo and Ingrid Bergman while studying in Stockholm.

Rebecca details the long history of The Wizard of Oz’s ruby slippers.

Where will The Irishman be shown besides Netflix?

Disney is being stingy with releasing its older Fox movies to theaters.

Is Star Wars struggling to win over the padawans?

You will not read another Hollywood interview this year, or indeed, this decade, like this New York Times interview with Nicolas Cage.

The songs of The Wizard of Oz have been remade, remixed and reinterpreted more often than you’d imagine.

Is this the world’s first animated film?

Bruce Springsteen attended the Asbury Park, NJ premiere of Blinded by the Light.