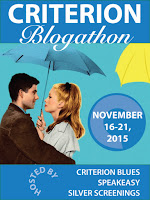 The Criterion Blogathon is an event examining the films within the Criterion Collection, hosted by Criterion Blues, Speakeasy and Silver Screenings. For a list of participating bloggers, visit the links at the host sites.

Spartacus
from my DVD collection

I first collected Criterion DVDs back when I worked video retail, in the late 90s-early 00s. It was my co-workers' fault. They were much bigger cinephiles than I was at the time. As my appreciation of movies grew - quality movies, not just whatever was playing at the multiplex that weekend - I began to notice patterns. One of them was that lots of quality movies being released on this new format called DVD were under the Criterion label, and they were the ones my co-workers talked about a lot.

I remember going to the Virgin Megastore for them, either in Times Square or Union Square. Virgin was one of my favorite hangout spots in the 90s because I could buy CDs, DVDs and books there, and often did. I also supported smaller, independently-owned record shops and bookstores, but Virgin had a section specifically devoted to Criterion DVDs, which held a big appeal to someone like me, who was getting an on-the-job education in classic cinema at work. 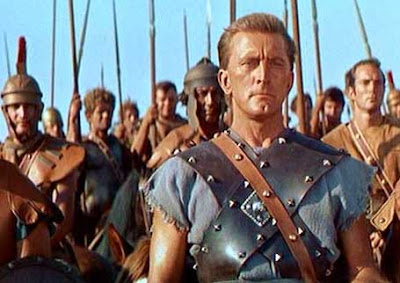 DVDs in general were beginning to take off during this period, so it was a great time to work in video retail and be a film fan. Once I understood the advantages DVDs had over VHS tapes - namely, the special features - Criterion slowly gained a special value for me. At Virgin, I would go through the Criterion section of the home video department, looking at the titles, one row after another. The foreign films were a mystery to me, but certain covers would catch my eye. The Old Hollywood titles were more enticing, and I thought it was classy of me to occasionally pick out a Preston Sturges comedy or an Alfred Hitchcock mystery for my collection.

Most of the Criterions I bought, though, were more contemporary: films by Wes Anderson or Paul Thomas Anderson, stuff like that. I remember how thrilled I was to get Kevin Smith's Chasing Amy as a Criterion, and while I eventually learned that the audio commentary was taken from the laser disc (remember those?), that didn't matter, since it was still new to me. So I consider Criterion to have played a role in my cinematic education. 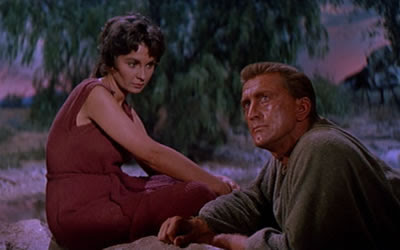 Now seems like a good time to talk about the Criterion DVD of Spartacus. Currently playing in the art house circuit is a biopic of Spartacus screenwriter Dalton Trumbo, one of, if not the best-known victim of the Hollywood anti-Communism blacklist.Trumbo was hired by the film's star and executive producer, Kirk Douglas, and according to the liner notes by film historian and author Stephen Farber:

...Douglas helped to destroy the Hollywood blacklist by allowing Trumbo to use his own name in the credits for Spartacus....[Media gossip columnist] Hedda Hopper denounced Douglas for hiring Trumbo, and the American Legion picketed the movie's Los Angeles premiere. Douglas's cheeky response was to hire Trumbo to write two more movies.

I don't recall when I bought the DVD, but I probably got it at Virgin. Let's talk about the extras.

The Spartacus Criterion is actually two discs. The first disc is the film itself. You know the story: Roman Empire, slave revolt, "I am Spartacus," etc. This is the 1991 restoration, which brings back a fair amount of material that was cut in 1967 due to censorship. Robert Harris was the guy in charge of the restoration, which also included inproving the color, and there's a short video that gives you an idea of how they worked with the original negatives to make the transfer to DVD more presentable. There's also Trumbo's original scene-by-scene analysis and supplemental music compositions by the film's composer, Alex North.

Here are quick summaries of the audio commentary: 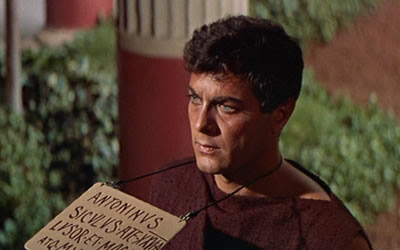 Perhaps the highlight of the second disc of Spartacus is a short documentary called The Hollywood Ten, in which Trumbo and the other blacklisted and convicted writers, producers and directors have their say. A narrator introduces the men, one by one, and then they talk about the House Un-American Activities Committee and why they defied that group's directive to rat on their colleagues, who may or may not have been Communists. I didn't like that they all spoke from a prepared script, though. It would've been nicer to have gotten their individual perspectives in a more candid setting. Perhaps this was done out of expediency; maybe getting all ten of them in one room wasn't easy. Don't know. Still worth seeing as a historical relic of the times.

There are several deleted scenes from the film that are kinda interesting, but like most deleted scenes, they don't add much in terms of additional context. There are also a ton of stills and promotional images.

There are behind-the-scenes interviews with Ustinov and Jean Simmons, plus another interview with Ustinov much later in life. He is witty, erudite and great with accents and impersonations. (His Laughton is especially good.) Seeing him in this context makes me want to check out some of his other films. There's also a brief biography of director Kubrick.

There's a fine short, set to North's film score, depicting training for scenes set in the gladiatorial school. We see Douglas, Woody Strode, and others learning how to fight more or less like Roman gladiators, using wooden sticks in place of swords. Everyone wears black Spartacus shirts, which makes them look like a regimented army or something.

There's newsreel footage featuring Douglas and other cast members on set and at premieres. In one we see Douglas present Curtis with an award given him from a film magazine. The original trailer is also available.

There are storyboards by Bass and Kubrick, although the former's are far more detailed and interesting visually. Among them, we see a sequence during the big battle at the climax where Simmons' character wanders off to have her baby. In addition, there are pages and panels from a Spartacus comic book adaptation. Some of the likenesses are close to the real actors, others are more generic.

There's also a transcript of the letter the MPAA wrote to the Spartacus production team after seeing an early cut of the film, in which they point out all the things they wanted changed or deleted. Much of what they objected to sounds expected: Simmons' skinny-dipping scene, the "snails and oysters" scene, etc., but there are other things they mention that really didn't make the theatrical cut, so it's well worth looking at.

There's something for every cinephile's tastes within the Criterion Collection, and within this Spartacus double-disc, there's much worth exploring. Still, perhaps the most significant aspect is the restoration of the film itself. Even on my laptop, the movie looks spectacular, and credit must go to Harris and his team for going the distance in making this epic film look the way it should.
Posted by Rich at 4:30 PM