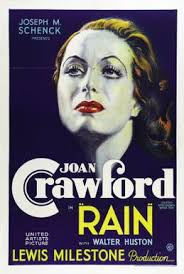 W. Somerset Maugham was a doctor when his first novel, Liza of Lambeth, was published in 1897. It sold so well that he was able to pursue writing full-time. During World War One, he was one of a number of writers who doubled as ambulance drivers for the Allies, including Hemingway, EE Cummings, John Dos Passos, Robert Service and Gertrude Stein.

WSM would become one of the twentieth century’s most popular authors, with hits including Of Human Bondage and The Razor’s Edge. In addition, he was a secret agent during WW1 for a time; his later novel, Ashenden, is said to have been an influence on Ian Fleming when he created James Bond.

In 1921, The Smart Set, an American lit mag, published a short story by WSM called “Miss Thompson,” later known as “Rain.” It was inspired by a trip WSM took by steamer to Pago Pago, in American Samoa, a locale notorious as one of the wettest places on Earth. According to Wikipedia, it gets 119 inches of rain per year, with a rainy season lasting from November to April. During his trip, WSM encountered a Miss Thompson on the boat as well as a missionary man, both of whom were models for the story’s main characters. The guest house where WSM stayed is now a notable landmark. 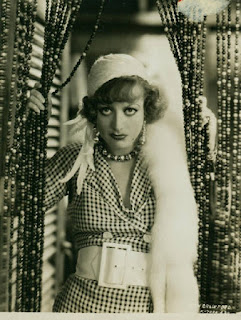 “Rain” would enjoy a long life. In 1922, it was adapted as a play starring Jeanne Eagles, who would later star in the first film adaptation of WSM’s “The Letter.” In 1928, Gloria Swanson and Lionel Barrymore starred in the first film adaptation of “Rain,” called Sadie Thompson. Rita Hayworth starred in a 1953 remake called Miss Sadie Thompson (in 3-D!), and there was even a black version in 1946 with the provocative title Dirty Gertie from Harlem USA.

And then there’s the pre-code adaptation, titled Rain. Lewis Milestone, who also did All Quiet on the Western Front, directed as well as produced. From the beginning, the look of the film is distinctive. A number of shots evoke the Pago Pago setting and the rain in particular: mud, the sun through the trees, raindrops falling from leaves. Most Old Hollywood films can’t wait to jump into the action after the opening credits, but this one takes its time. Over the course of the film, we also get disconnected images of the native Samoans doing things like drumming, or catching fish with nets.

Milestone’s camera is very active for an early sound film. He’s conscious of fore- and background composition, and he’s not afraid to set up the camera in ways that help sell a scene. In one early example, a tipsy soldier walks around a table, addressing Walter Huston at various spots. With the table close in the foreground, the camera rotates, following the soldier as he talks to Huston. It’s an unusual shot for 1932, meant to reflect the lighthearted and playful banter of the soldier and to contrast with the stern and rigid Huston. 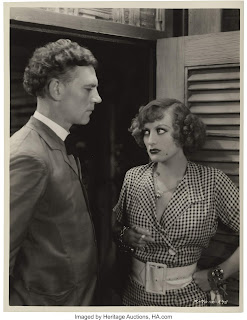 Huston is a missionary, traveling with his wife Beulah Bondi to Pago Pago. At the boarding house/general store where they’ll stay, they encounter Joan Crawford who, as Sadie Thompson, plays jazz music loud, smokes and “entertains” the soldiers who pass through. Huston feels it’s his moral obligation to reform her, but as you can imagine, she has no interest in being what he thinks she should be.

I had always thought Joanie was a Star long before she actually became an Actress, if you get my meaning. Her career had begun as a chorus girl, after all, plus she had started out in silents without ever having done stage acting. The only movie of hers from the late-20s/early-30s I had seen was Grand Hotel (from the same year as Rain, 1932) and good as it was, it wasn’t a role that required her to put on her big-girl shoes.

Then I watched Rain, and I saw her give an Oscar-caliber performance. Milestone clearly knew what he had in her, and shot her like the star she was, but this film is more than just a star vehicle. Without having seen Swanson’s silent version, Joanie makes the Sadie character her own and imbues her with attitude, spark, and vulnerability like I had never seen from Joanie in her youth before. 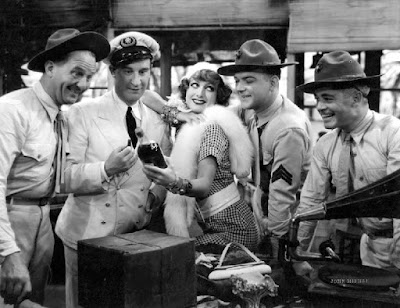 She had an outstanding co-star to play off of in Huston. The more I see of him, the more he absolutely amazes me. This was the first time I had seen him play a more high-class, erudite type of character; not even Sam Dodsworth was this upright and proper, and at first it took me awhile to get used to seeing Huston this way.

The scenes with the two of them are electric with tension, both sides going back and forth after their initial standoff. First Joanie starts to succumb to Huston’s moralizing, then (spoiler alert for an almost 90-year-old movie), he feels himself being led into temptation once she becomes more like him—which leads him to do something he shouldn’t. Milestone uses just enough ambiguity to leave us wondering what exactly happens in the end—we’re led to believe one thing, but it could have gone very differently. I think it did.

Rain landed with a thud at the box office—critics and audiences of the day didn’t go for it—but I think, I hope, that time has treated it much better. Joanie hit it outta the park with this one, even if neither she nor anyone else at the time, thought so.
Posted by Rich at 7:00 AM