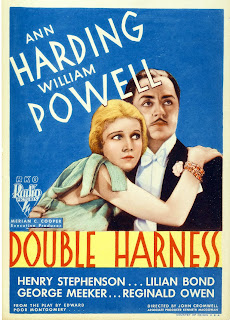 Often with old Hollywood movies, one gets a glimpse into the morality of the times they were made in, which were dramatically different from today. For one who never lived in those times, who only knows of them secondhand, it can drive one crazy to see—and by “one,” of course, I’m talking about Yours Truly, but it sounds fancier and more highfalutin’ if I phrase it that way, don’t you think?

I have trouble imagining real people acting the way they do in Double Harness, partly because it’s about rich white people who apparently have nothing better to do than play head games with each other over love and marriage, but also because the rules of the game, the implied moral code that defines their privileged and rarefied world, has little bearing on the 21st century world from which I’m observing. Most of the time, I can play along, accept this sort of thing at face value and say okay, I get it, this is how people acted back then and I just have to accept it. Sometimes, I can’t.

As I write this, it occurs to me that tone helps. If this was an Ernst Lubitsch comedy, it would’ve gone down much, much easier—but the women and men in this movie are so earnest about how they should behave towards each other, even when they do things they probably shouldn’t, it makes me wanna say “Get over yourselves!” to the lot of them. Are these the kinds of things worth occupying your time? 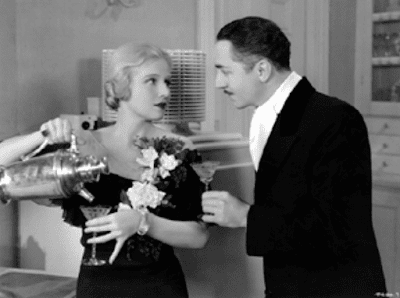 Ann Harding is a single high-society dame whose little sister is getting married and, perhaps hearing her own biological clock ticking, starts getting Ideas about what it takes to grab a man. She hypothesizes love is unnecessary in a marriage because Reasons. Platonic pal William Powell is a playboy heir who likes to run around. She launches a scheme to trap him into marriage and make an honest man out of him. It works, but complications, as they often do, ensue.

At the start, Harding is convinced she doesn’t have much to offer a potential husband, though it’s not like she’s down and out, especially given that Harness acknowledges the Great Depression as a fact of everyday life, more than once. She’s not standing on any bread lines. She can afford to go to the theater in the evenings in fancy dress, and she’s easy on the eyes. But I guess none of that is enough.

Her scheme depends on the notion that it’s improper for her to be alone with Powell in his pad, given his reputation—because it’s not like her family and acquaintances know him and her to be good friends who treat each other well, or more importantly, like she was a grown-ass woman and who she chooses to spend time alone with is her own damn business. 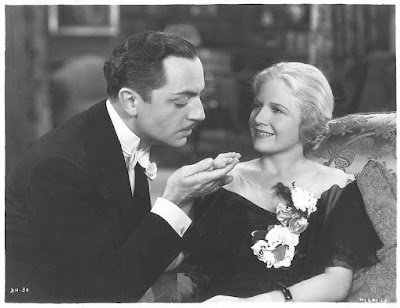 But her father catches the two of them talking like the consenting adults they are and concludes Powell must be putting the make on her, and she must be letting him (a much worse crime, of course)—therefore Powell must do “the honorable thing” and marry her, something he’s not eager to do, though not necessarily because of her. No one questions any of this because these are the rules of the game. Harding counts on her father’s reaction because she’s playing a game of her own, but the whole thing, the father’s attitude and Harding’s scheme alike, does not sound like normal human behavior.

Powell warns Harding that he’ll make a lousy husband, and sure enough, he chases around an old flame who also got recently married but still carries a torch for Powell. Meanwhile, little sister spends so much of her husband’s money she gets in debt. And how sure is Harding about this whole marriage-without-love plan anyway? This stuff was more interesting, but getting there was the hard part, because none of this felt like it mattered.

TCM played Harness as part of a TCM Film Festival “greatest hits” weekend, in lieu of the canceled actual fest. Karen singled Harness out as worth watching, so I gave it a try. It wasn’t terrible—Powell is always worth watching—I just felt uncomfortable with the triviality of the plot.
Posted by Rich at 11:00 AM