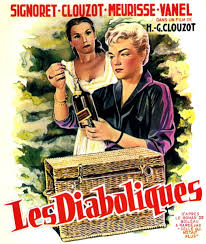 In 1940, Henri-Georges Clouzot was in a desperate state. The screenwriter had spent five years in a sanatorium during the 30s, recovering from tuberculosis, and while he had used the time to further study his craft, his scripts were selling poorly and he was running out of money. Meanwhile, World War 2 had broken out. When an offer came his way to work for a German-based film production company, HGC had no choice but to take it.

It led to him becoming a director, but after the war, he and other filmmakers were tried in court as German collaborators. He was banned from making films for life, but that sentence was reduced to only two years thanks to a bunch of artists rallying to his cause, including Jean Cocteau, Rene Clair and Jean-Paul Sartre.

Thanks to their efforts in reducing his exile, HGC went on to become one of the finest filmmakers in the long and proud history of French cinema, and one of his greatest hits is today’s subject, Diabolique, an entertaining thriller he co-adapted from a book and made with his wife. 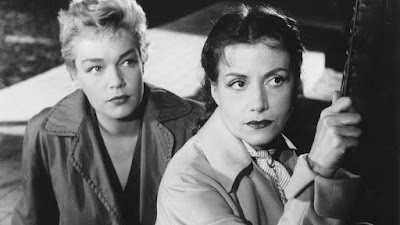 Brazilian actress Vera Gibson-Amado had divorced French actor Leo Lapara when she met HGC in the late 40s. Lapara had roles in earlier HGC films and she worked as a continuity assistant. Long story short, Vera and HGC fell in love, got married and she became Vera Clouzot.

As a film actress, she would only make three films before her death from a heart attack in 1960, but they were all for her husband and the production company named for her, Vera Films. Diabolique was one. If it feels like a Hitchcock film to you, well, the Master did express an interest in making it, but HGC beat him to the punch. 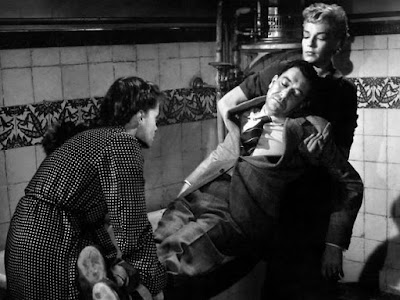 In the movie, the wife and mistress of the same man conspire to kill him, but after they do the deed, strange things occur that lead them to believe he’s not as dead as they thought. Vera plays the wife, future Oscar winner Simone Signoret plays the mistress. Their characters both work for male lead Paul Meurisse, the man in both their lives, in the same boarding school, so they’re all closely connected even outside their infidelities.

As you might expect, the mounting evidence that something about the murder didn’t go right hinders the women’s partnership, and while their triangle is an open secret amongst their co-workers (and even the kids in the school), Meurisse’s sudden disappearance raises some uncomfortable questions the women have to deal with. The truth revealed at the end definitely surprised me, though I had to think further to remember the clues as to its plausibility.