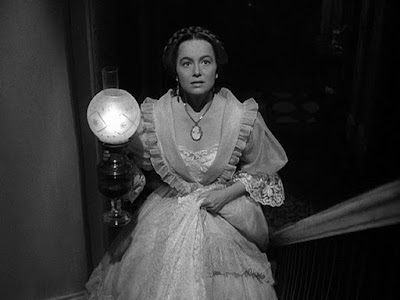 Let the rest of the world remember her for that tawdry Civil War melodrama. As far as I’m concerned, she’ll always be the great actress from The Heiress.

I first saw it in high school; we were studying the novel Washington Square, naturally, and I had no idea who she or anyone else in the picture was, but by the end I was mesmerized. I think it’s significant that I came into the movie with as few preconceptions as possible. I have since developed a bit of a resistance to period costume dramas; I’ve seen quite a few, both classic and contemporary, and some I’ve even liked, but I think it’s possible I’ve compared them to this in my mind and they’ve all fallen short.

Nothing can match the feeling of... awe I felt upon seeing this at a young and impressionable age, having no fixed ideas about period costume dramas or classic movies in general, and seeing this remarkable actress undergo an on-screen transformation from mousy girl to independent woman. And that ending has never left me in all the years since. Never.

I’ve seen her in other stuff since, of course. I’ve learned about her life off-screen, including her rivalry with her sister Joan Fontaine, not to mention the blow she struck for the rights of all Hollywood actors. That one movie, though, defines her to me more than anything else because of where and when I saw it.