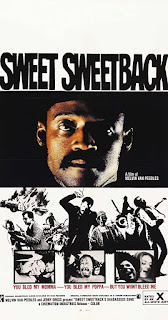 Sure, a movie about a black guy who kills cops and gets away with it looks really good right now... and I can’t help but feel churlish for wanting to criticize a movie like Sweet Sweetback’s Baadasssss Song, which even in its day hit like a bolt of lightning and set the stage for the blaxploitation films of the 70s. Still, it’s worth discussing as a film, independent of its wider cultural impact. I’ll do my best.

Chicago native Melvin van Peebles was working as a cable car grip man in San Francisco in the 50s when, in conversation with a passenger, he got the idea to make movies. A few fledgling attempts at some short films led to an unsuccessful attempt at breaking into Hollywood which led to an extended stay in Europe for awhile, meeting avant-garde filmmakers, making some connections, gaining experience.

In 1968 he made his first feature, The Story of a Three-Day Pass, in English and French, which led to a gig at Columbia Pictures, where he made the comedy Watermelon Man in 1970. MVP, however, craved greater creative control over his work. 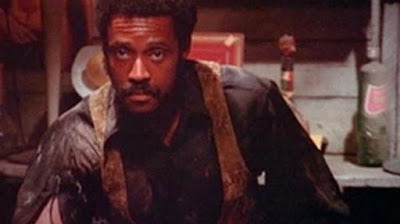 Bill Cosby lent him $50,000 towards production of his next film, which would be made outside Hollywood because no one there would finance a black power movie. MVP wrote, produced, directed, starred, edited and composed the score for Sweetback, which took nineteen days to shoot in 1971—plus he did all his own stunts, and yes, that’s really him banging away in those sex scenes. Got gonorrhea as a result.

MVP has said Sweetback needed to entertain as well as educate in order to bring in a wider audience. I suppose that explains the explicit sex. Well, let’s talk about it. The scenes may have been real, but they looked more like he was just laying on top of the women with little in the way of, um, action, if you know what I mean. The sex in The Room looked more convincing—but I can accept that... 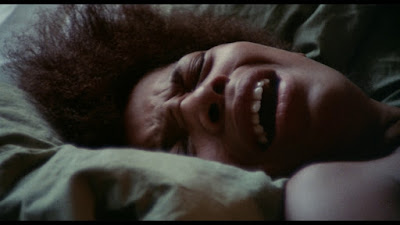 ...what’s much more disturbing is the opening scene, in which Melvin’s son Mario van Peebles, a teenager playing a young Sweetback, is filmed having sex with a grown woman. I can only assume Mario has made his peace with being used by his father this way, because he would go on to make a film about the making of Sweetback, not to mention a successful career as an actor and filmmaker himself, but it is damn near impossible to rationalize such a scene. Little truly offends me in movies, but this does.

The pacing could be better. There are longish stretches where it’s nothing but shots of Sweetback either running from the cops or balling. Compare this to The Fugitive, another film about a man on the run from the law, and you’ll see the difference. In that one, it’s clearer what Harrison Ford’s goal is—to search for the one-armed man and find evidence that will clear his name before Tommy Lee Jones catches up with him. 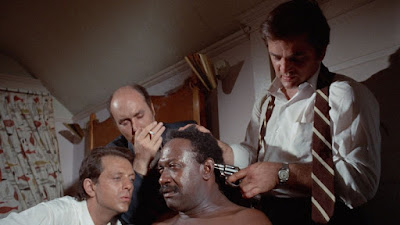 In Sweetback, MVP’s goal of reaching the Mexican border doesn’t crystallize until the final ten minutes or so of the film. The scenes with him running have little in the way of context. He could be going for a morning jog.

On a connected note, the police commissioner, as an antagonist, could’ve been stronger. He comes and goes in the film at random and he seems more reactive than proactive, content to let others do the work of capturing Sweetback, a man who killed two of his cops. He should be leading the search, and if he’s not, we should at least know why.

I didn’t understand the point of the scene with the bikers, where he has sex with one of their chicks. Was he trying to negotiate passage through their territory? Did he want something of theirs? Or was it just, as I suspect it probably was, to show him getting it on with a white chick? Sweetback talks little,  which I find interesting about him, but there are ways to show the importance of this scene to the story without words. 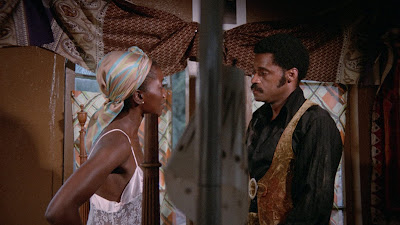 The women in the movie seem important, but they’re mostly there as window dressing. We see him argue with one, pissed at him for past transgressions, but then she agrees to help him only if he shtups her. We see another one whose scene is one long rant at a cop looking for Sweetback. Would it have killed MVP to have developed some of these one-scene wonders a little further?

All of this said, there are things I liked: having every black person in the city cover for Sweetback as he makes his getaway was a nice touch. The scene where the cops break into the apartment of a different guy, thinking he was Sweetback, and killing him anyway (for sleeping with a white woman, no doubt), was powerful. The scene where Sweetback helps a kid beaten by the cops to get away at the expense of his own chance at freedom was moving. And the score, done in collaboration with Earth, Wind and Fire before they hit it big, was good.

I think the screenplay definitely deserved at least one, maybe two rewrites before MVP rolled the cameras—like other multi-hyphenate filmmakers, he believed he could do it all himself and never bothered to have someone critique his work first—but the film made $15.2 million on a $150,000 budget, gave birth to a new sub-genre and paved the way for strong black voices in cinema from Spike Lee to Julie Dash to Kasi Lemmons to Barry Jenkins and more. Does it matter what I think?
Posted by Rich at 7:00 AM