Nude on the Moon 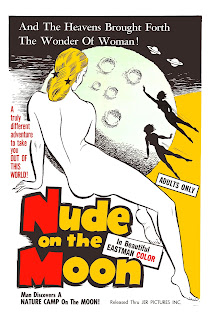 I really feel you should know that before anything else.

Does it matter? Eh, not really. A movie with a title like Nude on the Moon is made for one reason and one reason only—to see lots and lots of hot chicks—and in that sense, this delivers big time. The girls in this movie may not actually be nude, but they are all gorgeous and they’re filmed perfectly, with a steady camera and in plenty of sunlight.

Lots of dudes made nudist camp and “nudie cutie” films back in the late 50s and early 60s, such as Russ Meyer, whom we talked about earlier this month, and while those films served a market Hollywood wouldn’t touch, the vast majority of them faded into obscurity in time. So why has this one not only survived, but is remembered today, if only by a few die-hard cultists?

This one was not made by a dude. 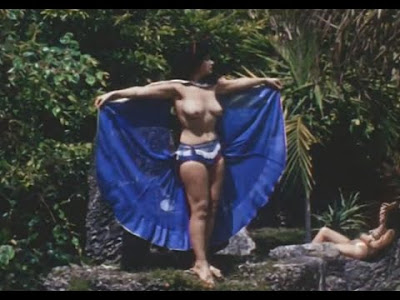 Her name was Doris Wishman, a Bronx native. She studied acting in the 30s with, among other people, Shelley Winters. In the 40s and 50s, in addition to acting, she was in the indie film distribution racket. In 1958, her husband died of a heart attack only five months after their marriage. You can imagine how devastated she must’ve been—but she did something with her grief.

First, though, a sidebar: in 1957, the case Roth v. United States went before the Supreme Court. At stake was the question of what constituted obscenity. You can read the details here, but the bottom line was a legal definition was established: material whose “dominant theme taken as a whole appeals to the prurient interest [of the] average person, applying contemporary community standards,” and in a 6-3 decision, it was deemed unprotected by the First Amendment. 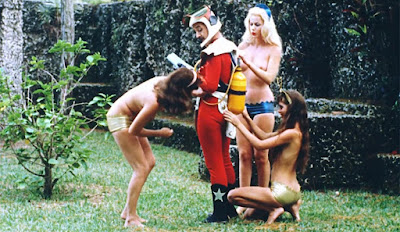 Sexploitation films took off not long afterward, now that a line had been drawn between sex and obscenity. “Nudie cuties,” like what Meyer made, were different from nudist camp movies, where the Supreme Court had ruled they were educational. For more on the history of sexploitation, behold this think piece on the subject from no less an authority than the Nude New York Times.

Either way, they were big business, and Wishman decided to get in on it—as a filmmaker, not an actress. The New York Appeals court ruled, also in 1957, that films with nudity could be shown in the state, so she borrowed $10,000 from her sister and made Hideout in the Sun, which came out in 1960. She worked under male pseudonyms, but she was writer, co-producer and co-director. It did well enough for her to follow up with Moon in 1961, the year JFK made his “we choose to go the moon” speech in his inauguration address.

To call Moon science fiction is almost an insult: it has absolutely no basis in the space program or any knowledge of the moon or space travel in general—but so what? It’s got topless women! It was filmed at a place called Coral Castle in Miami, a location with a fascinating history of its own.

The aliens in the movie constitute a nudist camp, which a pair of apparently sexless astronauts discover in their voyage to the moon. Seriously, they barely notice, much less mention, the aliens’ state, and there’s certainly no hint of sex—though given the climate of censorship Wishman worked under, I’m beginning to understand how that could be. 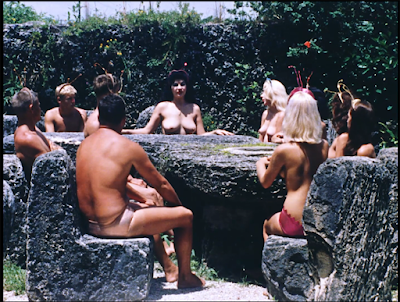 That said, the movie is absolutely MST3K-worthy. At first I was reminded of The Time Machine, where George meets the Eloi in the future and is disappointed at the sight of their indolence. The nudist topless aliens are the same way, but the astronauts don’t judge them for it; they’re content to walk around taking photographs—and of course the younger of the two falls in love with the queen of the colony.

She’s a scream: she communicates telepathically, in a whisper of a voice-over that was perhaps meant to sound mysterious but comes across as silly instead. Perhaps a better comparison would be with Queen of Outer Space with Zsa Zsa Gabor, only much less campy. 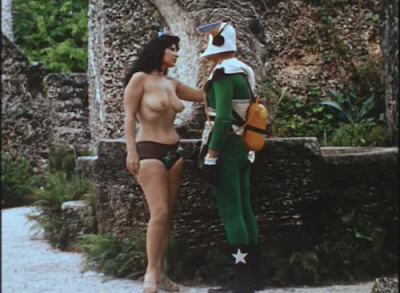 Wishman went on to become the distaff Roger Corman, learning as she went and making a bunch of movies on the cheap, many of them in the sexploitation field—including two with a stripper with a pair of bazongas you have to see to believe and even then, you might not believe it. Here’s a complete and very loving profile of Wishman, who should be remembered much better. She may not have been the first woman director, or even the best, but she worked at it for longer than any other woman, before or since.
Posted by Rich at 7:00 AM