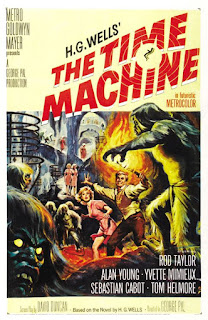 Last year I bought a used anthology of HG Wells stories: The Island of Dr. Moreau, The Invisible Man, War of the Worlds, and today's subject, The Time Machine.  I haven't finished it; I started Time but other things distracted me, as they tend to do.

Wells' writing is different from modern fiction. It's sparser, but a bit more florid also. Time the book didn't necessarily bore me, but it didn't quite suck me in either. Maybe that was because I had seen the time travel genre to death, in many forms (especially recently), and he was practically inventing the genre when this was written. 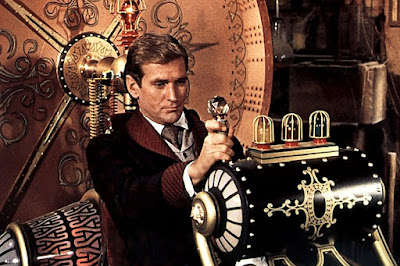 Herbert George Wells, born in England in 1866, started out as a teacher and later a journalist and even an artist before he got into short story and novel writing, and not just SF. Of course, it is SF for which he's best remembered.

In Wells' day, science fiction was called "scientific romance," a term associated with writers like Arthur Conan Doyle and Jules Verne, as well as the filmmaker George Melies. Wells' approach to the genre revolved around grounding the reader in credibility, so that the incredible elements could be more easily accepted. He felt one crazy assumption, such as the possibility of time travel, was all you needed on which to build.

Time was not Wells' first time travel story. In 1888, seven years before Time, he wrote a short story called "The Chronic Argonauts," which was also about an inventor of a time travel apparatus. (Some say Wells was inspired by Thomas Edison.) Before even that, in 1881, a short with a different kind of time machine, "The Clock That Went Backward" by Edward Page Mitchell, ran in the New York Sun. 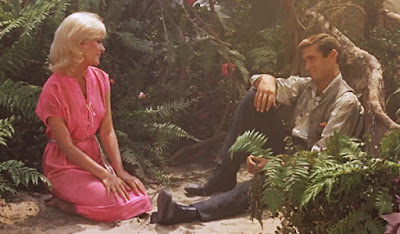 Did you know there's a deleted scene from Time? Wells wrote it at his editor's suggestion. The nameless protagonist goes even further into the future, past the era of the Eloi and Morlocks, and discovers a new species that resembles them both. Wells didn't like it, though.

I had seen the 1960 film adaptation before, but I had forgotten how entertaining it was. Screenwriter David Duncan, in adapting the book, fleshed out the protagonist's 19th-century buddies and his relationships with them in a way that really humanizes him. 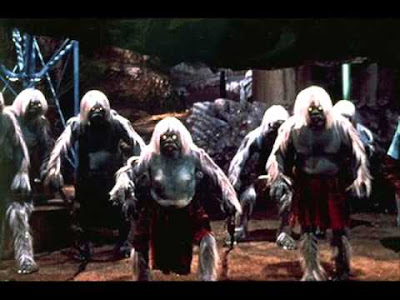 Rod Taylor, under George Pal's direction, portrays the idealistic humanist well, in a way that made me think he might have been an influence in shaping Star Trek's Captain Kirk. And speaking of Trek, Wah Chang, one of the Oscar winners for the film's special effects, went on to work on the show as a prop man, designing the original tricorder and communicator.

I saw Time with Virginia. It was her first time at the Loews JC and she loved it, taking pictures on the mezzanine level and digging the Wonder Organ. I was thrilled to have her there in a place that means so much to me.
Posted by Rich at 7:29 AM