The Lon Chaney Blogathon is an event devoted to the life and career of the silent film star, hosted by Maddy Loves Her Classic Films and Silver Screenings. For a list of participating blogs, visit the links at either site.

I never read Charles Dickens' Oliver Twist in school or anyplace else. Dickens was one of those old authors I probably took for granted. A Tale of Two Cities was one I tackled in school, naturally; I think I might have read, or tried to read, Great Expectations in college, back in my reading classic literature phase, but I couldn't tell you much about it. I know Oliver from the movies, especially the 1968 musical.

The 1922 silent film is, I believe, the first film adaptation. It was a vehicle for rising child star Jackie Coogan, hot off the smash success of The Kid, with Chaplin. He was all of eight years old when he made Oliver, but he's not bad in it. He knew how to look pathetic and downtrodden, at any rate, as his character is shuffled from one fate to another by opportunists, oppressors and no-goodniks. One would never know he'd go on to be Uncle Fester in The Addams Family! 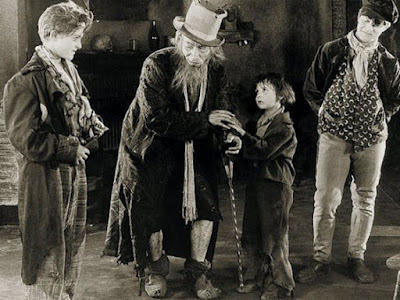 But he's not today's subject; that would be his Oliver co-star, the man of a thousand faces, the one and only Lon Chaney Sr. He played Fagin in the film, and as you'd expect, he was made up to look really old, with scraggly hair and beard, plus ratty clothes. He's good, as usual, getting deep into the role: walking hunched over, gleefully teaching his charges, including Oliver, how to pick pockets from unsuspecting marks.

I've talked about Chaney before. In an era in which computers can make anybody look like anything, Chaney still stands out for his chameleon-like ability to embody a wide range of characters.

The child of deaf parents, he learned how to pantomime early in life. On the stage, he used makeup to hide his insecurity, and after awhile he became an expert on the craft of using makeup. Eventually, he made his way to Hollywood, and the medium of film, still in its infancy, proved the perfect vehicle for him. 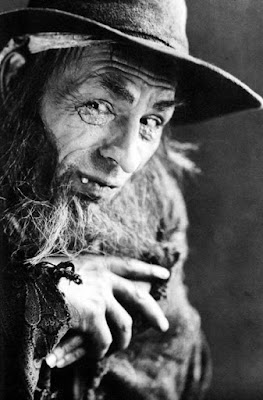 In her book Silent Stars, film teacher and historian Jeanine Basinger praised him for his ability to empathize with outsiders:


...As Chaney's career developed, he was drawn to playing two basic types of social outcast: the criminal and the cripple. He seemed to identify deeply with characters who were outsiders and loners. No matter how twisted mentally or physically these characters were — either human or monster — he played them as having recognizable emotions... so the audience could understand their evil, realize where it came from, and even sympathize with it if they chose to. He brought understanding and tolerance to these outsiders, and a conviction that there was another side to their lives beneath the obviously ugly surface. Audiences responded to this conviction, and they still do.

Practically the entirety of Chaney's career was in the silent era. What kind of films would he have made in the sound era? His only talkie, a remake of his silent film The Unholy Three, provides a clue. Here's a clip.

Would he have continued in this vein of playing outsiders? We'll never know, but I prefer to think of him as being of the silent era. The films he made then were like nothing we've seen before or since. I'd argue they belong there.

Other Lon Chaney films:
He Who Gets Slapped
The Phantom of the Opera
Laugh Clown Laugh
Posted by Rich at 6:17 PM