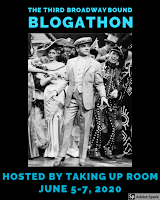 The third annual Broadway Bound Blogathon is an event spotlighting film adaptations of Broadway shows, hosted by Taking Up Room. For a complete list of participating bloggers, visit the link at the host site.

Stephen Sondheim celebrated his 90th birthday back in March (his day falls four days after mine), and despite the quarantine, an all-star gala was still able to be held in April—online.

The Stephen Sondheim Theater in Manhattan, like the rest of Broadway, is currently shut down (the adaptation of the film Mrs. Doubtfire was playing). The original opened in 1918 under the name Henry Miller’s Theatre and went through different incarnations until the interior was demolished in 2004. It was rebuilt and reopened in 2007 and was re-christened for Sondheim in 2010. Among the productions that have played there include Our Town, Born Yesterday, Witness for the Prosecution, Cabaret, Bye Bye Birdie and Beautiful.

A giant of the American stage, Sondheim has composed songs and/or written lyrics for shows the whole world knows: West Side Story, Gypsy, Into the Woods, A Funny Thing Happened on the Way to the Forum, plus lyrics for songs from the movies Reds and Dick Tracy. He’s got eight Tonys—that’s more than any other composer, kids—plus eight Grammys, an Oscar and a Pulitzer, among many other awards and honors. 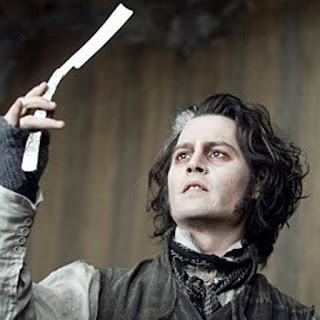 In 1846-47, an author whose name has become lost to time serialized a “penny dreadful” in The People’s Periodical and Family Library, a British magazine, called The String of Pearls. Published over the course of eighteen weeks and totaling over 700 pages, it was about a barber named Sweeney Todd, a serial killer whose victims get baked into meat pies by his accomplice, Mrs. Lovett. This was written over forty years before Jack the Ripper stalked the streets of London.

Pearls was such a hit it was adapted for the stage even before the serial finished publication. In 1852, it crossed over to America. In 1973, Christopher Bond expanded on the story in his theatrical incarnation, including a villain who provides motivation for Todd’s actions: a judge who covets Todd’s wife and frames Todd to get him out of the way. Sondheim went to see this version in London and got inspired.

In Sondheim’s musical version, he wrote the lyrics and Hugh Wheeler wrote the book—and there were lots of lyrics to be written. 80 percent of the show is sung, which has led to some debate as to whether or not Todd qualifies as an opera instead of a musical. I don’t think it matters, but then, I’m not an opera fan.

Harold Prince directed the original production for Broadway, Len Cariou played Todd and Angela Lansbury was Mrs. Lovett. For a role she had to be talked into (she initially thought hers was more of a supporting role before Sondheim increased its size), it has become one of the best-known roles of her long career in film, stage and television and led to one of her four Tony awards. Have a listen to her sing—and because one can never have too much Angie, here’s a retrospective of her stage career. 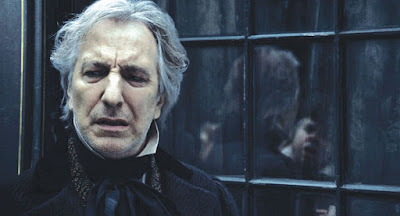 Todd opened at the Uris Theatre on Broadway in 1979 and played for 557 performances. It was nominated for nine Tonys and won eight, including Best Musical. In London, it opened in the West End at the Theatre Royal the next year, starring Denis Quilley and Sheila Hancock, and it won the Olivier for Best New Musical. The most recent revival was off-Broadway, in 2017.

And now we finally come to the 2007 film adaptation, and few subjects ever matched with a director better than Sweeney Todd with Tim Burton. This story was tailor-made for him and his aesthetic of quirky loners in Goth settings doing creepy things. Once again, he cast his twin muses, Johnny Depp and Helena Bonham Carter, as the leads and put them in outfits designed by Colleen Atwood. Alan Rickman was the judge, and Timothy Spall and Sacha Baron Cohen were also part of the cast. Burton saw the original London production in 1980 three times in a row. He’s a big fan. 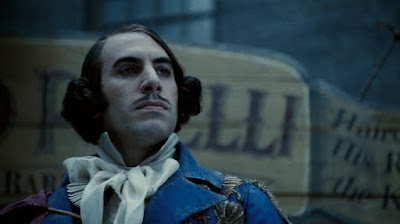 Depp, as most people know, is an accomplished musician as well as an actor. Here’s a review of the album from his all-star rock band Hollywood Vampires. Ironically, he has said in the past that he frowns on actors making music.

Is it gory? Well, there’s definitely a lot of blood, a lot of dudes’ throats getting slashed, but something about the lavish production makes it seem less squirm-inducing than one might think, at least for me. Plus the fact that everyone’s singing makes the violence seem less real somehow. It’s hard to explain. This would definitely be appropriate for a Halloween night viewing, no question, but if violence can be made... elegant?... somehow, Burton’s adaptation comes close to achieving it. Watching this has got to be a way different experience than seeing it on stage. 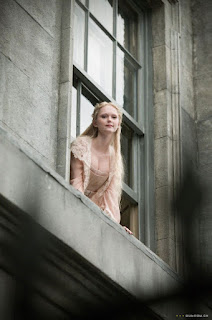 The real Fleet Street, by the by, is less intimidating in real life. It runs east-west in London, bordered by the River Fleet, and dates all the way back to the days of the Roman Empire. Many of London’s newspapers came from there. Now it’s more known for its law offices and pubs. Not sure if it has any barber shops.