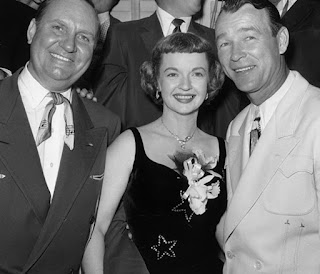 Singing cowboys (and cowgirls) have been around almost as long as sound in motion pictures. I can’t say I have much experience with them. I remember some of the country records my father listened to by self-styled cowboys—Marty Robbins, Freddy Fender, Tex Ritter—but as a kid, I never associated singing cowboys with the movies. I suppose my father must have watched singing cowboy movies growing up and then later, as an adult, but I don’t recall seeing any on TV.

If you had asked me back then, I would’ve said Gene Autry was the owner of the California Angels and Roy Rogers was the fast food restaurant. Even when I discovered who they were beyond those roles, I can’t say I cared much; westerns were what my parents watched. Now, many years later, as I re-examine westerns, it occurs to me that my education would be incomplete without a foray into the sub-genre of the western musical, and the two guys who dominated the field like oil rigs on the plains of Texas.

Here’s a top ten list of singing cowboys and cowgirls featuring some names you may not know. Here’s a history of the sub-genre, with a heavy focus on Autry and Rogers. With this post, I’m mostly interested in seeing their movies (and a bit of their TV shows) and seeing which one of them I like better. I realize I’m working from a small test sample, given the breadth of their careers, but I’m guessing their movies followed a formula and rarely strayed from that formula. My small sample will probably be enough.

I tried to find two films that were as representative of Autry and Rogers, and their respective personas, as possible. Not easy when I know almost nothing about their films... but I found two that will do for this post: Autry in The Old Barn Dance, from 1938, and Rogers in San Fernando Valley, from 1944.

In Dance, “Gene Autry” (yes, both Autry and Rogers play versions of themselves in their respective movies) is a singing horse trader who comes to town and hopes to make some business by throwing a barn dance and auctioning off his horses, but he has to contend with modern technology, in the form of a tractor company competing for the same audience of potential consumers, using the female manager of a local radio station as a pawn.

As a singer, his voice was not far removed from the cinematic crooners of the 30s, with maybe a little more twang. None of the songs in Dance stood out all that much, with the possible exception of the title track. To someone like me, who’s used to singers who put more, shall we say, expression in their voices, I find it hard to take male singers from this period seriously if they’re not blues or jazz. Frankly, I wish he had sung more like this in the movies.

Autry gets to do some physical stuff: during a horse stampede, he picks up a kid by his belt and pants and saves him from getting stomped; he gets in his share of fisticuffs, and some of them almost look convincing; and in the climax, he, or rather his stunt double, chases down the bad guy’s car on horseback, climbs into the car and knocks the bad guy out of the car. For a guy who didn’t look as physically imposing as Wayne or Scott, I suppose it’s impressive.

Autry’s companion in Dance and throughout his cinematic career was Smiley Burnette. Not as much of a buffoon as I thought he’d be, his shtick was using more... creative ways to dispatch the bad guys than fighting, plus playing unusual musical instruments. Didn’t think he was all that funny, but his versatility with instruments is certainly notable. Turns out he had quite the career for himself off-screen as a prolific singer-songwriter and continued in showbiz long after Autry retired from the movies. And he was born on the same day as me!

Autry’s horse was named Champion. He doesn’t really stand out in Dance, so I looked for him in other clips. Here’s one. Did you know this horse—or at least his successors—had his own TV show (yes, I watched an episode; it’s as corny as you’d expect), his own radio show, his own comic book, his own IMDB page?

The Gene Autry Show was more of the same, only with better fight scenes. No Smiley, though; the new sidekick was much dumber and didn’t sing. 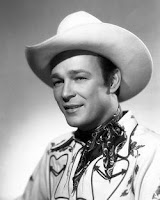 Valley, by contrast, resembled an MGM musical. “Roy Rogers” meets cute with Dale Evans at a town festival and tries to get in with her by masquerading as a cook at her father’s ranch, but has to contend with a man-crazy younger sister, her persnickety father, and some sneaky horse thieves. This felt a little more like an ensemble, where everybody in the cast gets something to do—even Trigger!

As a singer, Rogers is decent. I wouldn’t say he was all that different from Autry in his prime. They were both silky smooth, though Autry, being from Texas, sounded a little more like a cowboy than the Cincinnati-born Rogers. At least Rogers could yodel! Plus, he had The Sons of the Pioneers to back him up. In Valley, they appear as ranchers who get run out by Evans’ father for loafing but get drawn back as part of a scheme by her sister when Dad reluctantly hires a group of women ranchers. I liked the songs in Valley better too, especially the duet between Rogers and Evans during their first meeting.

Rogers gets to do some physical action: sharpshooting at a carnival, chasing down a runaway horse, and a pursuit of the bad guys in the climax, but unlike Autry, there’s more of a showman feel to the things he does, like he was doing all these things because he’s cast as a cowboy and these are the things a cowboy is supposed to do—and to his credit, he does them with panache.

It’s his pairing with Evans, though, that makes all the difference. They had a Fred-and-Ginger feel to them, and their chemistry is unmistakable, even—maybe especially—when they’re bickering. I had expected Evans to be more of a Annie Oakley type, and maybe she is in other movies, but in Valley she’s the traditional spunky, beautiful and witty love interest in the mold of, well, Ginger Rogers: a compliment to her leading man but a star in her own right. And her place in movie and music history is firmly secure because of the song she wrote, “Happy Trails.” Evans started out at Fox and met Roy Rogers in 1944 on the set of Cowboy and the Senorita. Valley was the fifth of six movies they made together that year. Pre-Virus, there were plans for a Broadway musical about Rogers and Evans for a 2021 release.

You might have heard that Trigger was stuffed by Rogers and put on display after his death in 1965. (He was sold in 2010.) In Valley, he gets to not only do his share of hard riding, he even fights off one of the bad guys by himself at one point. The palomino stallion was a beautiful horse indeed, with long hair and a golden coat. It was Smiley, of all people, who gave him the name—he and Rogers teamed up in a few movies. Trigger made an appearance in The Adventures of Robin Hood, when he was called Golden Cloud. Olivia De Havilland rode him. A statue of him was erected in 2018. (Evans’ horse, by the way, was named Buttermilk.)

The Roy Rogers Show was in a similar vein to Autry’s show in that it had standard western-style action-adventure, but less interesting than the movies. I’d prefer watching the Champion show. Evans is there, along with Trigger and another needless comic sidekick. The episode I saw had a strong religious element, which was a major turn-off for me. Evans in particular was a real holy roller; in later years, she cut some solo Christian records and even hosted a religious TV show.

I could go into much more about Autry and Rogers, but this post is long enough as it is. I think overall, I prefer Autry as a singing cowboy specifically and Rogers as an entertainer, which includes his partnership with Evans, his inclusion of the Sons as part of his act, and his overall showmanship.