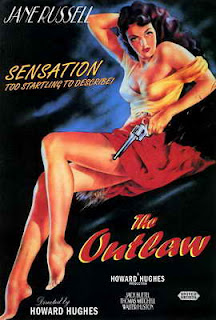 I was going to spend this post about The Outlaw talking about Howard Hughes, about the real Billy the Kid and Doc Holliday and Pat Garrett, but the truth is, this is such a bad movie that I can’t be bothered—and I was disappointed, too, because Walter Huston is in it and I had enjoyed every other film of his I had seen—even Kongo! And this is all before I get to Jane Russell.

No one in it acts like a normal human being. (Well, maybe the middle-aged Mexican woman does. Her I liked.) The major bone of contention between Billy and Doc is over a horse. I swear to god they fight over this horse for most of the movie. They fight over Russell, too—she starts out with Doc but ends up with Billy—but at one point, when offered the choice of Russell or the horse, Doc actually chooses the horse.

HE CHOOSES THE HORSE OVER JANE FREAKING RUSSELL.


She doesn’t get off easy either. When she first appears, she tries to kill Billy because he killed her brother. He overpowers her and rapes her (not that you actually see it, of course) but when Doc brings him back to her place after Billy gets shot, suddenly she’s Florence Nightingale to him, and it’s implied that she may have screwed him. Basically she falls for him for reasons that are completely unclear to me.

Plus I feel like the victim of false advertising. All the posters for this movie sell Russell as this lusty, busty wanton with her clothes half off and I thought she’d be a femme fatale, but not only is she not a femme fatale, she does not dress in the movie the way she does in the poster and that is unforgivable. Goddammit, I was promised Jane Russell with her top half off and I did not get it! Who can I sue for this egregious miscarriage of justice? (We do get a bondage scene with her though, which was... unexpected.) 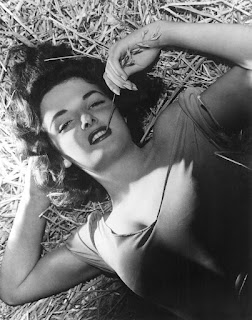 For all of the hype around Russell, her character has no urgency; she’s defined by her relationships with Billy and Doc, and after her initial fight with Billy, the only action scene she’s in is as part of a chase on horseback with some Indians. At times she didn’t seem important to the plot as anything other than eye candy—which is nice, but after awhile one expects more.

And then there’s the music. Most scores in classic movies telegraph emotions, so that’s nothing new, but this movie overdoes the “funny” music and the sad trumpet sound in particular so often you’d think it was meant to be a comedy. The score tries to get you to laugh at moments that are not funny and it does this often. I don’t think I’ve ever seen a movie this desperate to please before. 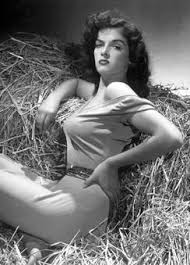 To top it off, this has to be the most homoerotic western I’ve seen since Brokeback Mountain. Now don’t get me wrong, I loved Brokeback and I think it should’ve won Best Picture—but I have a hard time believing Hughes had a gay love triangle in mind with The Outlaw, not when manly-man Howard Hawks was the original director.

The long glances between Billy and Doc, Billy’s indifference to Russell (at least at first), Garrett acting like a jilted wife towards Doc over Billy, especially in a hilarious over-the-top moment late in the movie when Garrett completely loses his shit when he thinks Doc is gonna go off with Billy and leave him (I’m totally not kidding)—normally I don’t read ho yay into old movies, but it’s not very subtle in this one! 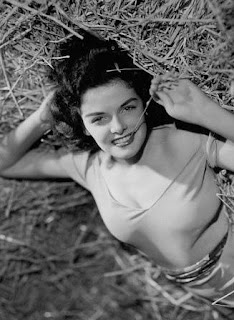 The story of the making of The Outlaw is way more interesting than the film itself, so if you wanna learn about that, knock yourself out. I suppose I could talk about the image of Wild West outlaws like Billy the Kid and Jesse James and those guys—there’s a scene where Billy entertains a bunch of starstruck kids who know all about him, as if he were a rock star—or maybe about the importance of horses in westerns in general, but this movie isn’t worth all that. So I won’t.
Posted by Rich at 7:00 AM