The giant-sized special edition of The Dark Pages with my article on Anthony Mann & John Alton is available now. I have my hard copy edition, and I gotta say, I'm impressed with the look of it.

Back in the 90s, I had a passing interest in zines, which coincided with my initial steps into self-publishing comics. I remember trying to market my comics amongst the zine crowd, but it didn't work out; zines are a whole different animal.

One would think zines were old hat in the digital age, but TDP is one of the finest looking ones I've come across in a long time: simple, but well laid out, on nice paper, with every square inch utilized, and a topic, film noir, with a wide and devoted audience. It's like reading all the entries in a blogathon in one collection.

Karen and her staff have a quality product here, and I'm pleased to have been a part of it.

Speaking of blogathons, if you want in on the Richard Matheson Blogathon, hosted by myself and Debbie from Moon in Gemini (who is also part of the special TDP issue), be sure to e-mail me at ratzo318 (at) yahoo (dot) com or post in the comments and I'll put you on the list. March 9-10 is when it goes down.

Here's more pushback against Whoopi Goldberg's anti-bike diatribe from weeks ago. Long-time readers of this blog know my feelings about biking, and the need for livable streets in general. It's not that cars are unimportant; it's just that they dominate our streets at the expense of other forms of transportation, and as a result, they've become as great a threat to human safety as guns, if not more so. We shouldn't tolerate it anymore. 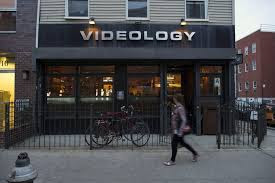 I recently learned about the loss of another movie venue: Videology in Brooklyn. It began life as a video rental store, but in recent years, they had morphed into a cafe that screened movies and held movie-related events, in addition to renting movies. I had been there for both screenings and a trivia night, and I dug the atmosphere over there. It wasn't a first-run theater, but it was a lively place to watch movies with friends.

A new release roundup for you tomorrow, followed by a special feature for February and another blogathon is on tap.

Only a few links this month:

Silver Screenings Ruth explores the science behind the original Frankenstein.

Karen has a blog called Shadows and Satin. Here she looks at Hollywood gossip from the pre-code era.

Raise a glass for Roger Corman regular and character actor great Dick Miller, who died at the age of 91.

Will lack of a visa keep one of the Roma actors from making it to the Oscars?

Finally, to go off-topic for a minute, I wanna give a shout-out to the memory of a friend who passed away earlier this month, a cartoonist by the name of Batton Lash.

For decades, he did a comic strip turned comic book now called Supernatural Law. It wasn't a superhero book, but it had lots of characters in it who were just as peculiar. Think X-Files meets Law & Order. He and his wife Jackie put it out themselves, and it was one of the best self-publishing success stories in all of comics.

Batton told me once that if it ever became a movie, he'd have liked Rene Russo and Jason Alexander as the comic's long-running feature characters, Wolff & Byrd. At one point Hollywood did come knocking on his door, but to my knowledge, nothing ever came of it. Too bad.

He was a good guy, and his marriage to Jackie was one of the longest I knew of, in or out of comics. That's why I know Jackie will keep his memory alive for all his fans and friends. I'm proud to have called myself one of each.
Posted by Rich at 8:00 AM