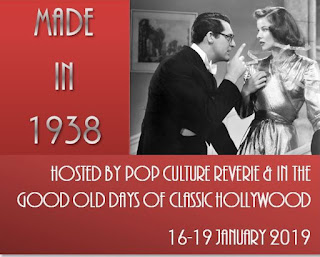 The Made in 1938 Blogathon is exactly what it says on the tin, hosted by In the Good Old Days of Classic Hollywood and Pop Culture Reverie. For a complete list of participating blogs visit the links at the host sites.

The numbers tell the story of Lou Gehrig, and what a tale they tell: 17 seasons, all with the New York Y-nk--s; lifetime batting average of .340; a seven-time all-star; two-time MVP winner; three-time league leader in home runs; five-time league leader in runs batted in; a Triple Crown winner and owner of six World Series rings.

Plus the most important number of all: 2,130. That's how many consecutive games he played, folks: the equivalent of almost six calendar years without a day off. Though it's no longer a record, it's still a monumental achievement.

His premature death at age 37 raised awareness of the rare condition that took his life, amyotrophic lateral sclerosis, to the point where the disease now bears his name. And perhaps you've heard of the film they made about him.

But did you know he himself once co-starred in a Hollywood movie?

In 1936, Gehrig hired Babe Ruth's agent, Christy Walsh, as his own. Walsh is believed to be the first agent in baseball, during a time when ballplayers' financial fates were completely at the whim of the owners. Ruth, because of his immense popularity, was an exception who capitalized on his fame outside of baseball, with Walsh's help.

Gehrig wanted the same, and one of the first possibilities Walsh presented him with was film. If the thought of Gehrig replacing Johnny Weismuller as Tarzan sounds bizarre, get a load of this promotional picture of Gehrig as Tarzan. According to the New York Times, Tarzan creator Edgar Rice Burroughs took one look at that and told Gehrig by telegram, "I want to congratulate you on being a swell first baseman."

1937 was just another year for the Y-nk--s, winning 102 games and beating the New York Giants in five games in the World Series, the second of three titles in a row.


Walsh, meanwhile, found another promotional opportunity for the Iron Horse: a major role in a Western musical from 20th Century Fox called Rawhide. Gehrig worked on it after the 1937 season.

He got second billing to a little remembered singing-cowboy actor named Smith Ballew. In the film, Gehrig plays a version of himself, who decides to quit baseball in order to head west and open up a ranch with his (fictitious) sister, Evalyn Knapp, but he runs afoul of the Western equivalent of the mafia, shaking down ranchers for protection money. Ballew is the two-fisted lawyer who takes them on, with Gehrig's help.

Gehrig is, if nothing else, boisterous and enthusiastic in what's an otherwise fluffy bit of B-movie hokum. In one scene, he fights hired goons by pitching pool balls at them as if he were throwing to Bill Dickey behind the plate as Ted Williams rounded third. In another, he hits a baseball into a window several floors above ground level to get Knapp's attention.

Ballew is less Tom Mix and more Roy Rogers; he's there to sing songs and punch dudes out, as well as to make goo-goo eyes at Knapp. Gehrig's own singing is, thankfully, limited to a single verse of a single song. 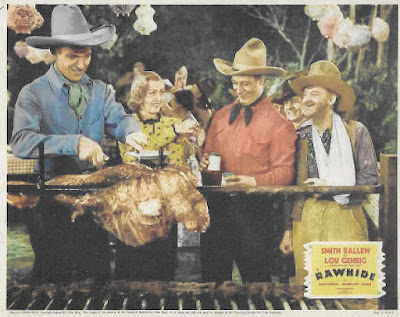 At the end, it's revealed why Gehrig gives up baseball to run a ranch: he was holding out from spring training for more money; when the Y-nk--s agree to his terms, he leaves the ranch to return to baseball! Isn't that funny.

Rawhide debuted during spring training, in St. Petersburg, Florida in March 1938. Gehrig was part of a parade that heralded the premiere, attended by Y-nk-- management and the town mayor. There were even fireworks.

If you're a baseball fan, Rawhide is worth looking at to get a sense of one of the all-time greatest ballplayers away from the ballpark, filtered as it is through the lens of Hollywood. Everybody else should probably re-rent Pride of the Y-nk--s instead.