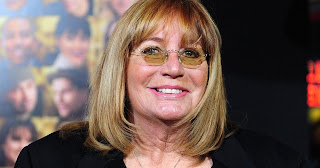 The Christmas/New Year's week was very good. Virginia and I spent Christmas Night at another holiday dinner with friends. On New Year's Eve, she and Sandi were part of a large chorus that performs a NYE show every year.

Afterwards, a whole bunch of us rang in the new year at the same bar and grill where Virginia and I first got to really know each other a year ago (we consider it our anniversary), so NYE has taken on an added significance for me. Have I mentioned lately how lucky I am to have her in my life?

The latest draft of the novel is done but it's not ready to go out yet. I know this for certain; it's better than it was a year ago, but it's not where it oughta be yet, so I gotta tighten it up some more.

The good news is I've got some beta readers looking it over, though I could use a few more — especially baseball fans. If anyone out there is interested, e-mail me at ratzo318@yahoo.com and let's talk.

A brief word about Penny Marshall: Laverne and Shirley was one of my favorite sitcoms and Big was one of my favorite films growing up. I vaguely remember being a bit surprised to learn she was becoming a director, but she turned into a very successful one indeed. As a comedienne, she was enjoyable and part of my childhood; as a director, she proved to have an even more special talent that deserved to flourish more than it did. She was a trailblazer for the likes of Kathryn Bigelow, Ava DuVernay, Greta Gerwig and more. She'll be missed.

Anna's guest post isn't gonna happen for awhile; it looks like now is the wrong time for her, for a bunch of reasons. Hopefully that'll change sometime soon.

This year's blogathon will be announced tomorrow. It's devoted to someone whose work you're very familiar with, especially if you know your classic genre material, but it's not an actor or director. My new collaborator and I think you'll like this one a lot.

Jacqueline looks at office Christmas parties in the movies.

Maddy tells of an inflential studio that changed the face of British cinema.

Raquel reviews a film directed by actor Ray Milland which has some personal meaning to her.

Netflix has big plans for 2019 and beyond.

The close friendship of Penny Marshall and Carrie Fisher.

The resurgence of films and TV shows based on black literature.

This interview with a New York immigrant delivery worker is part of a forthcoming documentary on the profession.

Hollywood has trouble sticking to the facts when it comes to Laurel & Hardy.

Are the Home Alone movies as innocent as they seem?

Trivia about my favorite Christmas movie, Miracle on 34th Street.

Check out this rare footage from over a century ago of four great fine artists.
Posted by Rich at 7:30 AM