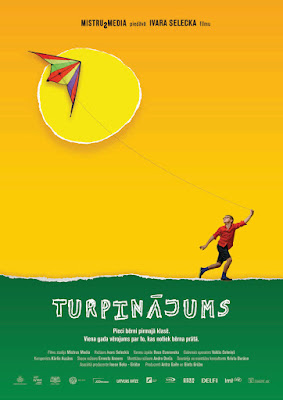 Vija recently suggested seeing a new Latvian movie (she's of Latvian descent herself) that screened in the city this week. I had absolutely zero experience with Latvian cinema, and it had been awhile since I saw a movie with the gang, so I decided to give it a try. It was Vija, Franz and Andrea who came this time.

Scandinavia House is the go-to place for Nordic culture in New York and America: that's Denmark, Norway, Sweden, Finland and Iceland, in case you didn't know. Vija had been there before. They're currently running a series called "Nordic Oscar Contenders." (So why are they showing a Latvian film? This might explain it. Thanks to Andrea for the link!) 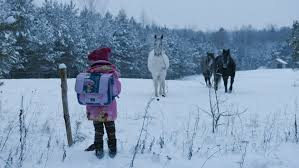 To Be Continued (in Latvian, the title translates to Turpinājums) is a doc that is also this year's Latvian entry in the Oscar race for Best Foreign Language Film. The director, Ivars Seleckis, specializes in documentaries; you could say he's Latvia's answer to Werner Herzog, or Errol Morris.

This film spends a year following a group of first-grade kids. Why these kids in particular? The movie doesn't give much in the way of an explanation. They're bright, cute in their own ways, from good homes — both in the city and the country, but I had the impression these could have been any Latvian kids. 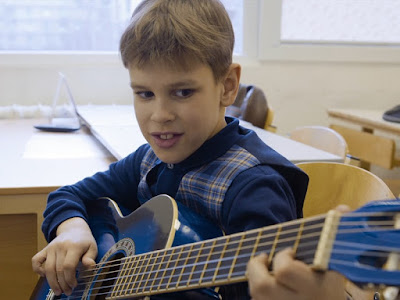 Extracurricular activities, with an emphasis on sports and performing arts, are emphasized: we see the kids play hockey, do martial arts, sing and dance, in addition to getting a standard education (math, science, history, etc.) in classes that don't look overcrowded, by teachers who don't look stressed or harassed.

I thought the kids were given a great deal of opportunity to express themselves in class; it wasn't a situation where Teacher dictates the lesson and the kids regurgitate it. There was more of a give-and-take at work; students were free to state opinions and preferences at the teachers' direction.

We also saw the kids' home lives, of course: one lives on a farm, one is of Russian descent, one lives with her grandma, etc. They go through their ups and downs, like kids everywhere do. 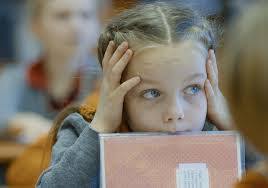 Vija and I were reminded of the Seven Up documentary series, an ongoing look at the lives of a select group of kids every seven years, begun by director Michael Apted back in 1964 (and is still going! 63 Up will come out this spring). The difference, we agreed, was that Seleckis didn't appear to make any kind of sociological statement with this film. Part of me kinda wished he had, but for what it was, Continued was okay.

UPDATE: I asked Vija to provide her insight into the film. Here she is:

As a displaced Latvian, I could not help but viewing [sic] the movie,  Turpinājums, from the standpoint of "what if..." What if my parents had not fled Latvia during WWII? What if I had been born in Latvia in the 21st Century, how would I be different? How would my relationship to my heritage differ? There is an innocence in the children and a sense of belonging that I did not have growing up.

This documentary although similar to [the] Michael Apted "Up" series, doesn't have the scope of those films. Rather it offers a more intimate and personalized view of each child. Education and school is central here. The film explores how a country with such a ravaged history can redefine itself in the 21st Century through education [of] its children. We don't see quite enough of the education system to be able to adequately judge its effectiveness. The problems of raising children in Latvia are similar to those faced by parents everywhere. How to get children to do their homework, and limit their use of electronics, especially time spent by boys playing violent video games. There is also irony here.-- in the young girl, Aneta, who lives with her grandmother and only Skypes with her mother while singing songs about mothers.

The documentary is beautifully filmed with the Latvian landscape becoming another character with its forests, cranes and horses. Yet, even that is no match for the lure of big cities and economically prosperous countries, where all the girls with the exception of Anastasija want to move to the UK. I would be remiss not to mention Glebs, the only Russian national in the film. This fact is not really explored in any great detail and I would have liked to have seen more.