I really wanted to write about these movies in more detail, but it was just easier to provide quick summaries for them this month. You already read about To Be Continued, a last-minute insert. 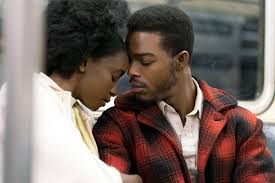 - If Beale Street Could Talk. I read the James Baldwin book many years ago and thought about rereading it before seeing this adaptation from Moonlight director Barry Jenkins. I changed my mind because I had read there were some differences. Virginia said she found it tough to sit through. It's not, not really; it's just intense. Jenkins emphasizes the love story at its heart, and does a good job of retaining Baldwin's literary voice. Strong performances, lush cinematography. Jenkins did it again, folks. There's no stopping this guy. 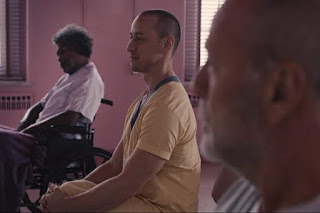 - Glass. I honestly didn't think this was as bad as the critics made it out to be, though there were more than a few head-scratching moments. Give Night credit for keeping this character-based as well as not making the final battle a CGI cartoon fest full of rubbery figures. (For the record, I saw Split on cable months ago, so I knew what to expect.) James MacAvoy is scary as hell in a role both physically and mentally demanding; I can't begin to imagine how one would prepare for such a role once, much less twice. 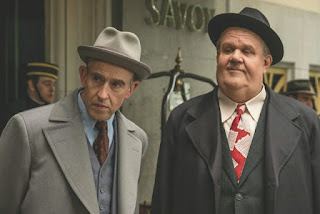 - Stan and Ollie. A nice tribute to one of the all-time greatest comedy teams in their twilight years. While I'm not a huge Laurel & Hardy fan, I could tell Steve Coogan and John C. Reilly captured the feel of their routines down well. Jeanine Basinger called L&H "a married couple, without the marriage," and this film captures that, the bickering as well as the love and respect. Virginia liked it too (we have yet to seriously disagree on a movie).
Posted by Rich at 7:30 AM