The Adoring Angela Lansbury Blogathon is an event celebrating the life and career of the actress, hosted by Realweegiemidget Reviews. For a list of participating bloggers visit the link at the host site.

Is it wrong of me to think of Angela Lansbury as a television actress? Sure, she has a long and distinguished career in film, not to mention on stage, but for someone who grew up when I did, I can't help but think of her, not as the young, curvy starlet from films like Gaslight and National Velvet, or the middle-aged thespian from The Manchurian Candidate and Bedknobs and Broomsticks, but as the old lady who solves murder mysteries every week on CBS. 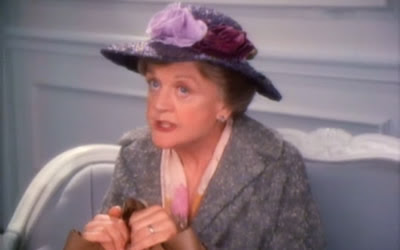 Time has treated Murder, She Wrote well. As recently as last year, Angie still gets interviewed about the series, which runs in syndication. A reboot of the show without her was deemed not a good idea after all, and though she says she'd like to return to Cabot Cove one more time, who knows if that'll happen?

I was only a sporadic watcher of MSW during its initial run, too young to fully appreciate it yet drawn to the character of Jessica Fletcher. Maybe it was the episodic format of the show, without any season-long story arcs which seem to be de rigueur these days. Maybe it was the inherent goodness of Jessica, who was the furthest thing from an anti-hero. (Someone should make a statue of her!)

Though I never stuck with it, I remember MSW as a popular show and Jessica as a beloved character. (NFL football fans will remember the way CBS Sports announcer Pat Summerall would dramatically say the show's title when reading the promo during a break in the game.)


Getting back to Angie as a TV actress: she's actually done a whole lotta television, dating back to the old anthology series from the 50s, as well as a lot of TV movies, including four MSW ones.

Today's subject, Mrs. 'Arris Goes to Paris, is one of those TV movies. She made it during her MSW run. Based on a series of books, it's about a poor maid who really, really, REALLY wants a dress by Christian Dior.

That's it! Of course, it's not just about the dress, it's about what it represents: elegance, class, a chance to look glamorous for once in her life — and because she's a good person (xenophobic attitudes aside), she gets it in the end, and helps out other people along the way, including Diana Rigg and Omar Sharif. It's predictable, but very sweet. A pleasant way to pass the time. 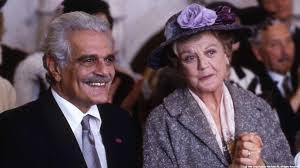 Angie is still active as of this writing. She had a small role in Mary Poppins Returns earlier this winter, and she has performed on stage as recently as 2017. It's a cliche, but in her case, it's true: she is an inspiration and a treasure.