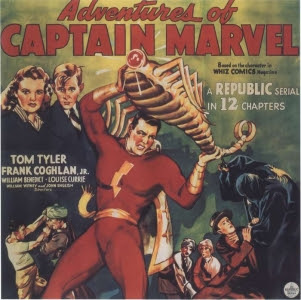 Superman was created for DC Comics in 1938, and once it took off, the publisher was really concerned about imitators. There were some running around in the late 30s, but when Captain Marvel took off and was as huge as it was, DC chose to pursue legal action against Fawcett in 1941, which included a failed attempt to stop the Adventures of Captain Marvel serial.

The case didn't come to trial until 1948. Fawcett won, but DC appealed three years later and won. Fawcett settled out of court, paying damages and cancelling all CM comics.

In 1967, Marvel Comics created a completely different "Captain Marvel" character of their own and trademarked it. Over the years, the CM name has been passed down to several different Marvel characters. The one in the upcoming Captain Marvel movie with Bree Larson is the latest version.

In 1972, DC licensed the rights to the Fawcett superheroes, but because Marvel now held the trademark on the CM name, DC had to call their new book featuring the original CM Shazam! As a result, younger audiences thought that was the name of the character in long red underwear with a thunderbolt on his chest.

In 2011, DC finally said the hell with it and officially changed his name to Shazam. I imagine many fans, however, still think of him as CM. 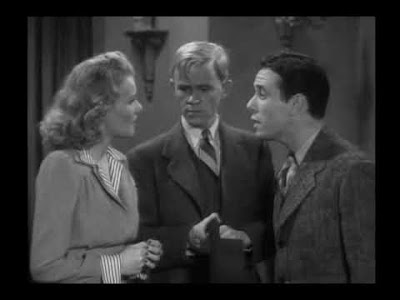 The Scorpion's goons, being INCREDIBLY stupid, jump Billy and Betty instead of letting the guns in the automated trap finish them off, and one of them takes the bullets instead.

Inside the safe is a map leading to the location of the lens. It's still in the tomb where they found the scorpion idol! The other two goons grab the map and go. Billy as CM catches one and retrieves the map but the other escapes.

Malcolm divides pieces of the map among the remaining members of his group, including Billy and Betty, and they all set sail for Siam.

The boat runs into foul weather and gets stuck on a cluster of breakers. Billy as CM helps get the passengers and crew off the boat by use of a basket with ropes and pulleys. Meanwhile, the Scorpion (who actually bothers to change into his mask and robes) makes his move.

He knocks out Betty (how many times have Billy and Betty been knocked out by someone throughout this serial? They must have lumps on their heads the size of cantaloupes!) and steals something (a gun, I think). When Billy realizes she's missing, he goes back for her, but the rope breaks and they're stuck on the boat as it slips into the ocean...

So we're running out of suspects as to who the Scorpion is, but at this point I think we can definitely rule out Betty and Whitey. Once again, I have to wonder why Malcolm doesn't get the feds or Interpol involved.

Also, it's getting harder to justify Billy's secret identity. Yes, the Scorpion is someone in Malcolm's group (it could even be Malcolm himself), but you'd think Billy would let Betty and Whitey in on his dual identity so they could help cover for him for all the times he's not around. Billy's secret is just taken for granted. 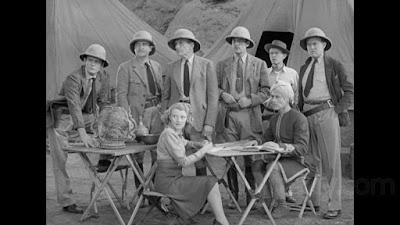 Billy swims to shore with Betty and everyone heads for the nearest town, Khandapur. The Scorpion gets word to the Siamese army and they prepare for the arrival of Malcolm and company.

Billy spots the troops signaling to each other as Malcolm's group drives toward the tomb. As CM he catches one soldier who spills his guts about the trap waiting for Malcolm's group and CM helps them avoid it.

Billy conveniently waits outside with Tal Chotali, Malcolm's Siamese guide (who's been part of things all along) as the others enter the tomb. They find the lens, but the soldiers activate the volcano above the tomb and it falls around their heads.

I'm reminded of the circumstances that led to their finding the scorpion idol in the first place, and once again, I think the Siamese are justified in their actions, though now, there's more at stake: keeping the Scorpion from getting his mitts on the idol, with all the lenses in place. 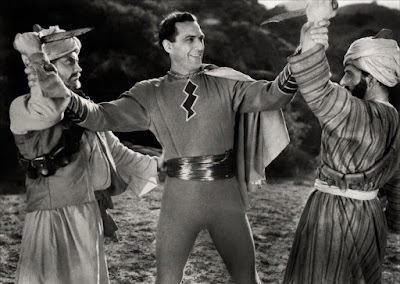 Tal Chotali runs off to stop the army, while Billy, as CM, enters the tomb and gets Betty and Whitey out. The Scorpion escapes through an inner passageway (finding time to get back into his mask and robes again), kills Malcolm, and sees CM change back to Billy.

The Scorpion rejoins the army and coerces them to capture Tal Chotali, then he tells the head of the army to go after Billy. He gets Billy while his troops pick up Betty and Whitey.

The Scorpion reassembles the lenses into the idol, and threatens Betty's life unless Billy tell him how he got his powers. Billy, of course, says "Shazam" (in front of Betty and Whitey), busts free and unmasks the Scorpion in front of the Siamese: it's Bentley, the last remaining member of the expedition. He tries to get away, but the army leader uses the power of the idol on Bentley, zapping him dead.

CM destroys the idol and turns back to Billy without saying "Shazam." Tal Chotali explains that now that CM has served his purpose, he's no longer needed, and Billy is back to normal again.

But... how did Bentley amass so many goons to do his bidding? How was he able to keep Malcolm and the others unaware for so long? How did he plan for any of this? We'll never know.

Harry Worth plays Bentley. As the Scorpion, he lacked megalomania or any other stereotypical supervillain traits, which was different, to say the least.

Overall, despite the plot holes, ACM had its moments. Is this one of the greatest movie serials of all time? I haven't seen nearly enough of them to judge.

Coghlin was as much the hero here as Tyler. Billy's a little guy with a squeaky voice, but he's courageous, clever, and not afraid to mix it up with the bad guys when necessary, like he did in Chapter 11, for example.

For the most part, the cliffhangers worked. They would've hooked me if I had seen this in 1941. The story as a whole doesn't hold up that well, for several reasons, but it's entertaining. It's certainly worth seeing if you're a superhero fan.

Betty, Whitey and Malcolm crossed over into the Fawcett CM comics, and Fawcett even published a sequel to the serial.

Tom Tyler was mostly known for Westerns prior to ACM, dating back to the silent era, and returned to them after the serial finished. He was in Stagecoach and She Wore a Yellow Ribbon, plus non-Westerns like They Were Expendable, The Talk of the Town and The Beautiful Blonde From Bashful Bend.

Frank Coghlan Jr. was a child actor in the silent era, billed as Junior Coghlan. He made a lot of uncredited appearances in films and TV shows through the years. In 1974, he was on an episode of the live-action Shazam! TV show.

IMDB says both he and Tyler had uncredited appearances in Gone With the Wind. Can anybody confirm that?

Co-directors John English & William Witney worked together on other serials for Republic, including Zorro's Fighting Legion, Daredevils of the Red Circle and Drums of Fu Manchu. English also directed a Captain America serial.

ACM is available on Blu-ray.
Posted by Rich at 3:00 PM