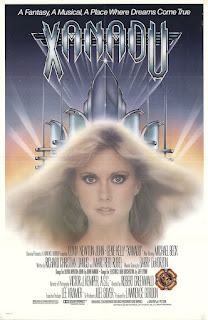 Olivia Newton-John was one of the first pop megastars I not only knew but genuinely dug. I may have been too young to have seen Grease, but the soundtrack was inescapable; you know the songs as well as I do—and of course, she had lots of other hits. Remember “Physical,” and the video that went with it, which took advantage of the aerobics craze at the time? That song was all over AM radio, and that video was one of the most representative of the 80s.

It was easy to grok why she was so huge: good-girl image combined with a heavenly voice. She was no Streisand, but she was pretty and exotic (if Australia counts as such) in a way reminiscent of older songbirds like Petula Clark and Lesley Gore.

To know that she’s on round three of her prizefight against breast cancer is pretty sad, but if interviews like this are any indication, she wouldn’t want me or anyone else to feel sorry for her. It could be this is the round she doesn’t get up off of the canvas, but if so, she’s gonna go out like a trooper, and even if you don’t care for her music, you have to respect her bravery.

Because she was a huge pop star, it was only a matter of time before Hollywood came calling. Grease has been written about to death by now—I think it’s terrific that she and John Travolta have remained so close through the years—but much less talked-about is her follow-up film, Xanadu, which did not exactly do as well. 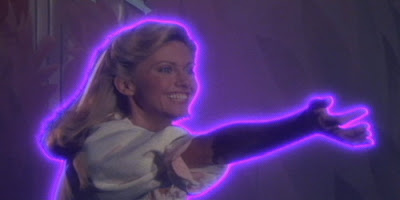 ONJ is a Greek muse unwittingly summoned to 20th-century LA by a struggling record cover artist, who is inspired to strike out on his own and help open a nightclub with Gene Kelly. Okay, is it cheesy? Yes. Is male lead Michael Beck (the guy from The Warriors!) dull as dishwater, lacking even a tenth of Travolta’s magnetism? Absolutely—and yet, I would not call this movie irredeemable.

Kelly’s presence is a big reason why. Consider the great musicals of his past: he always tried to do something a bit innovative, a bit challenging in terms of movie-making. This is the guy, after all, who danced in a pouring rain, wove ballet sequences into many of his epic musicals, sung in French, and even made you believe he shared a screen with a cartoon mouse.

Xanadu struck me as being in a similar vein, except attempting to literally weave a 40s aesthetic into a post-disco vibe at the dawn of the 80s turned into an awkward fit at best. Sonny, Beck’s character, would have us believe he’s all about rock ‘n’ roll, but it’s rock by way of Studio 54. The Solid Gold Dancers instead of Max’s Kansas City. 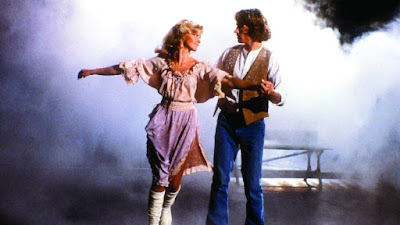 That 40s aesthetic makes sense, and not just because of Kelly: apparently Xanadu was inspired by the 1947 Rita Hayworth film Down to Earth, the sequel to Here Comes Mr. Jordan. I’ve never seen it, but it also involves muses.

ELO’s music is great, but half the time the leads don’t sing it. There’s one early scene where ONJ and Beck are wandering around an abandoned studio, playing around with the old sets. It’s the perfect moment for a duet, and a song plays on the soundtrack, but they don’t sing it. We just see them strolling through the studio. Beck’s voice could’ve been dubbed if he couldn’t sing, but hearing ELO perform the song Beck and ONJ should’ve been singing in that scene felt wrong. And yet there were moments where we see ONJ sing as well as hear her. Kelly too. 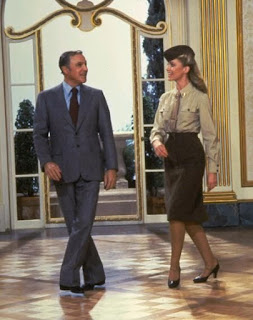 As an actress, I doubt ONJ was challenged much throughout her career, and she certainly isn’t here. Kira is a creampuff character in a creampuff movie. We don’t really see her “inspire” anybody except when she subtly suggests the name “Xanadu” to Kelly and Beck. She could’ve been a normal girl, really.

And yet, for all its flaws, Xanadu does have a certain innocent charm that pokes through at times. It’s a Mickey-and-Judy “let’s put on a show” story, in a world where everyone is basically decent and never too mean. Kira could’ve been played by Deanna Durbin in another life. 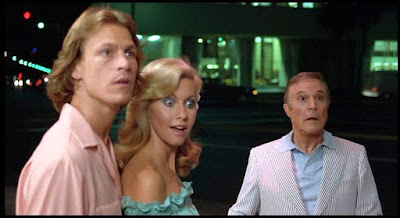 Perhaps that’s why in 2007, it was reborn as a Broadway musical. I remember the radio ads for it; they made a point of distancing themselves from the movie, saying in effect, “Don’t worry, this is nothing like the movie!” And it worked: the adaptation was nominated for four Tonys, including Best Musical. Here’s an article on the making of the Broadway version.

There are lots of cinematic bombs that deserve the derision they’ve gotten. Xanadu... not quite so much. It’s not good overall, but it’s entertaining, in its own way.
Posted by Rich at 8:50 AM