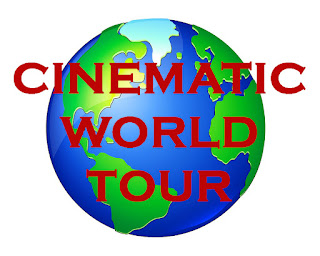 Where on earth is Rochefort, you ask? It's a seaside town on the west coast of France. See, I was flying to Paris to watch the Tour de France, but Freddy, my pilot, ran into some engine trouble, and we had to set down on an airfield about fifteen miles outside of Rochefort so he could take care of it. You don't wanna know how scared out of my mind I was!

I shouldn't have been, though. Freddy's flown all over the world and I totally trust him, but he's the kinda guy who likes to make flight conditions sound worse than they actually are, so he looks that much better when it's all over and he's settled the plane down.

Freddy knew a little bit of French, which was way more than me, so after we got a lift into town, he was able to get us situated in a hotel for the night. When we saw that there was gonna be a music festival going on this weekend, though, we figured what the hell, the Tour de France can wait. We're not likely to pass this way again. We decided to stick around for the weekend.

As we crossed the central plaza, I saw what looked like a flash mob at first, then I figured they were just dancers rehearsing for the festival. Or something. But why would they need to rehearse in such a busy, public place?

Freddy took a taxi back out to the airfield to help the mechanics there fix the plane - his baby, as he calls it - and I stopped into a cafe for something to eat.

I managed to get myself understood long enough to buy a tea and a muffin. I was eating by myself when it happened. I saw this sailor talking to the lady behind the counter - the proprietor, I imagine - when suddenly...

...I had the uncontrollable urge to stop what I was doing and listen to this guy sing! Even weirder - I understood what he was saying! He was still speaking in French, but it was as if his words were translated into English in my head! And there was music accompanying him, too - where did it come from? He sang of looking for his dream girl, and for that moment, it was as if nothing else mattered but his story!

Then his song ended and everything returned to normal. I couldn't understand what they were saying anymore, but I had the distinct impression that his story was important somehow, like it was part of something bigger, going on right under my nose!

I left the cafe and wandered around town, but the same thing kept happening! Wherever I went, people were singing, whether it was in galleries... 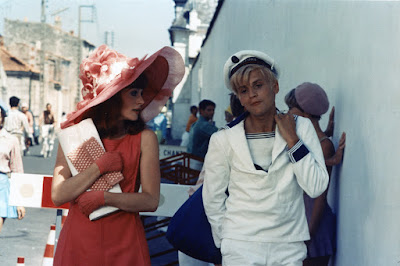 ...but especially in that damn cafe!

People were singing and dancing to songs about love - either dreaming of having one or lamenting a lost one, and every time, music appeared out of nowhere and I was compelled to stop and listen to them, and I understood them, for just that moment!

Freddy, of course, didn't believe me when I tried to tell him about it, not that I blame him. It sounds silly just talking about it now!

Anyway, we got there on a Friday and this - phenomenon, or whatever you wanna call it - continued into Saturday. The frustrating part was, I couldn't even ask someone on the street if this happened all the time here in Rochefort. Doesn't anyone here speak English?

Sunday was the day of the festival. The plane wasn't ready yet, but Freddy opted to come out to the show with me.

It was fun. We saw this two smoking hot chicks perform a song and dance number.

Unfortunately, I was still no closer to discovering the mystery of this place. Why does everybody communicate in song and dance? And why can I understand a language I don't speak when they do?

After the show, Freddy called the airfield. The plane was ready to go. I opted to spend one last night here before we left. After about half a dozen drinks and a long talk with Freddy, I accepted that I would never learn the truth behind Rochefort, nor would I ever learn if any of those people would find their true loves or not. I had a feeling they would, though.

The next day, Freddy and I checked out of the hotel, and as we crossed the plaza for the last time, that's when it happened... 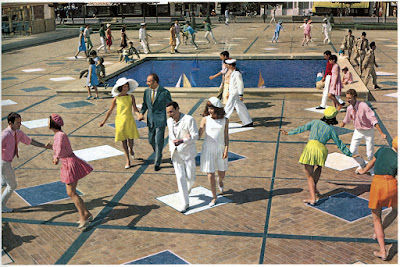 ...I suddenly had the urge to dance! A girl in a mini-dress strolled over to me and we danced like we were born to it all our lives! I looked around - and Freddy was dancing with another girl, too!

The song ended and we all went out separate ways. Freddy came up to me with this spooky look on his face. "You believe me now, don't you?" I said to him. He just nodded slowly. He picked up his baggage, I picked up mine, and we took a taxi to the airfield. We boarded our plane and took off for Paris. And we haven't spoken about it to each other since. Hell, I'm no longer even sure any of that was for real.

But for the lovelorn of Rochefort... it was a different story.

They knew it was for real.

Till next time,
Rich

---------------------------
Rochefort was an outdoor movie I saw down in Battery Park in lower Manhattan last Friday night. It was the first time I had been there in many years, and it was definitely the first movie I saw there. It's a lighter-than-air musical that's pleasant enough to watch. Lots of songs, many of which kinda sneak up on you. One can't always predict when a song's about to be sung in this movie. In fact, the structure feels a little different from a traditional Hollywood musical; there are almost as many moments of just dancing as there are of singing. And you can imagine how surprised I was at seeing Gene Kelly speak and sing in French!

Previously:
Black Orpheus
Posted by Rich at 7:30 AM